Midnight Club is back for next-gen consoles, and fans will be shocked at just how good their old favorite looks. Rockstar's Rage engine proves it can handle the high-speed action of Midnight Club while recreating a virtual Los Angeles nearly as detailed as Liberty City. Unlike Burnout Paradise, these streets are full of life – pedestrians, tons of ambient traffic, real-life stores, and L.A. landmarks like the Comedy Store and Amoeba Records.

The cityscape is amazing. The level of detail and the sheer amount of roadway to tear up seems limitless, and the diversity of L.A. lends it a less monochromatic feel than Burnout Paradise. But the real way Rockstar San Diego proves itself the genre master is the street design. While it's most certainly an open world – any number of routes might serve equally well in most cases – MC: LA subtly clues you in to the best routes and hidden shortcuts that make it play as fluidly as any track-based racer. In comparison to my experience with other games of its ilk, I rarely found myself getting lost or off track.

That's not to say it abandons challenge: the insane speeds and canny enemy AI will put your skills to the test. That doesn't even figure in the revamped police chases. The 16-player multiplayer matches also include a number of race, capture the flag, and team-based modes of mayhem. Thankfully, the control mechanics are dead on, offering a superb mix of arcade accessibility and fine control.

Longtime fans will be pleased to note that special abilities like Roar and the new Electromagnetic Pulse are assignable to any car and can be changed – one of many nice improvements to the interface and feature set. Despite DUB not being in the title, MC: LA has all the customization features (visual and performance based) of the last game and more.

As good as it is, Midnight Club's not perfect. The plot, a cliched affair, features some horrible dialogue – apparently every single person in L.A. is a macho toolbox (actually, maybe that's true). If I had a quarter for every time I was called ''tough guy,'' ''esse,'' ''holmes,'' or ''a little girl,'' I could probably buy another Xbox 360. Rockstar traditionally excels at pop culture, but this seems to hit all the wrong notes in an attempt at being edgy. While I love what they've done with L.A., ditching the three-city format of the last title makes the progression feel more static. There's still much to do and explore, but the excitement of graduating to a new area is gone. This sense of stasis pervades the entire game to a degree.

There's no disguising the fact that the Midnight Club basics have remained largely unchanged since the second game. One wonders just how many more miles are left on the tread. But for now, Midnight Club: Los Angeles is just what the doctor ordered: a fun, fast racing experience with enough content to keep you playing for months. 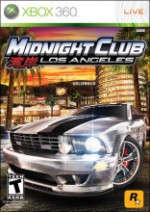 Midnight Club: Los Angeles
9
i
Game Informer's Review System
Concept Bring Midnight Club to next-gen systems, and add an enormous virtual Los Angeles
Graphics Demonstrates the power and versatility of Rockstar's Rage engine. It's nearly as detailed as GTA, but moves at jaw-dropping speeds
Sound Skim on familiar hits, but it's a nice selection of underground dance, hip-hop, and rock tracks
Playability Rockstar delivers an arcade-style racer that gives racers control in the midst of chaos
Entertainment It's not a huge step forward, but rather a gorgeous and exhilarating reminder of Midnight Club's appeal
Replay High