The original Metroid pioneered a new breed of exploration-based gaming. It was a non-linear experience that allowed players to traverse eerie alien landscapes, slowly amassing an ordnance of new weapons and tools that would help them overcome both environmental obstacles and combat challenges. Metroid’s formula was so strong that – even 30 years later – its influence on the industry is still felt. Games like Axiom Verge, Ori and the Blind Forest, and Castlevania: Symphony of the Night can all trace their heritage back to Samus’ first steps on the planet Zebes. However, despite the many challengers to Metroid’s throne, Samus Returns proves that Nintendo still understands the formula best.

The game picks up right after the events of the first Metroid. Intergalactic bounty hunter Samus Aran must travel to the Metroid homeworld of SR388 and eradicate the alien species before they can be turned into biological weapons. This 3DS title is technically a remake of the Game Boy title Metroid II: Return of Samus, and fans of the original will recognize certain enemies and environments, but Samus Returns features so many fresh ideas that it feels like a completely new adventure.

One of the big new additions to the franchise is a melee counter system that allows Samus to stun enemies with well-timed button counters that expose their weak spots and leave them vulnerable to a quick finish. This counter makes the moment-to-moment action more engaging than past 2D Metroids, and it keeps you on your toes because you never know when some creature is going leap from the shadows. Whenever I missed a counter, I knew it was my fault, but I loved finding the perfect flow in combat and hitting two or three counters back-to-back then wiping out a screen’s worth of enemies in seconds.

Like previous entries, Samus Returns features alien environments that do an incredible job pulling players deeper into cavernous landscapes with the promise of powerful upgrades. Many enhancements are familiar favorites, like the ice beam and spider ball, but MercurySteam also delivers a few new gadgets that offer fun twists to both exploration and combat. For example, Samus can use a new alien energy called aeon to overpower her suit for a short time, granting her defensive and offensive boosts. I got a real thrill out of using a new machine-gun aeon attack to burn through enemies who had previously seemed invincible. Likewise, Samus’ aeon shield was invaluable during boss fights and while passing through volatile habitats.

Thanks to a massive list of collectibles, your next reward is always just around the corner. Every area is littered with tiny power-ups like extra missiles and energy tanks, so you constantly feel rewarded for exploring every nook and cranny. Of course, many of these toys remain tantalizingly out of reach and beg you to come back after you’ve acquired the right tools to extract them from their environmental cages. The big and small rewards are so evenly spaced out that Samus Returns’ pacing remains superb, and I had trouble putting the game down for any length of time.

Collecting all of Samus’ upgrades is even more rewarding thanks to SR388’s richly detailed locations. These subterranean labyrinths wind through lava-filled caverns and ancient alien ruins. Mapping out the entire subsystem requires clever use of your entire toolkit, and subtle background touches like glowing eyes and crumbling debris help sell the feeling of foreboding isolation.

Samus’ last 2D adventure was in 2004 with the GBA release Metroid: Zero Mission, which was a remake of the original Metroid. Despite the lengthy hiatus between 2D entries, I was initially disappointed to hear that MercurySteam’s Metroid project was another remake. However, Samus Returns has enough unique content that it feels like a worthy sequel. MercurySteam’s first outing with the franchise is also different enough from the recent fan remake AM2R, so fans shouldn’t hesitate to pick up this rare gem. This might be Samus’ first 2D adventure in more than a dozen years, but it’s a great reminder of why we fell in love with the franchise in the first place. 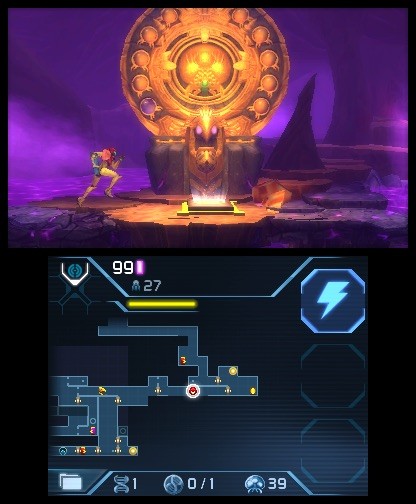 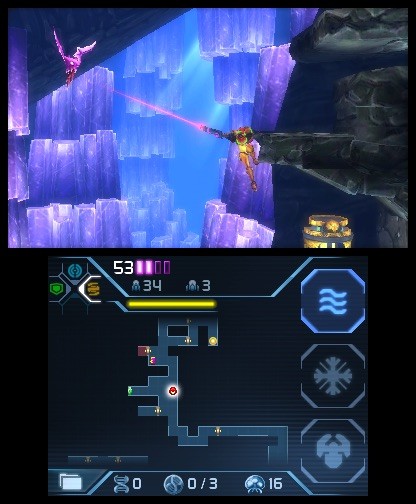 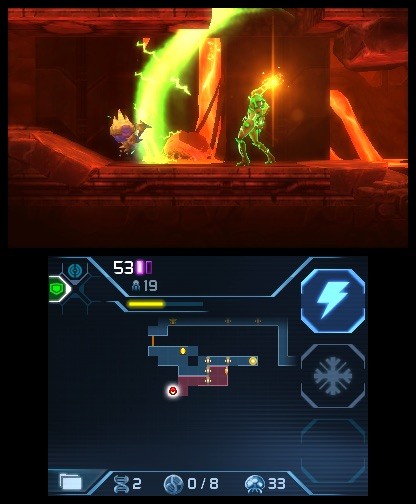 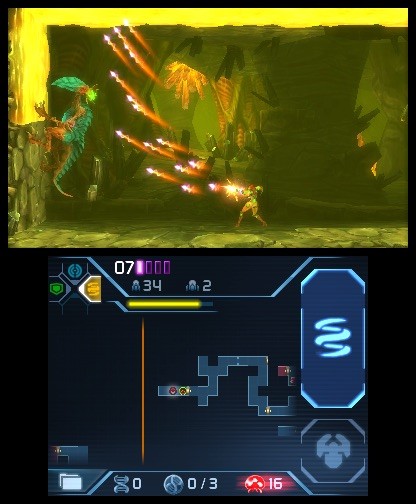 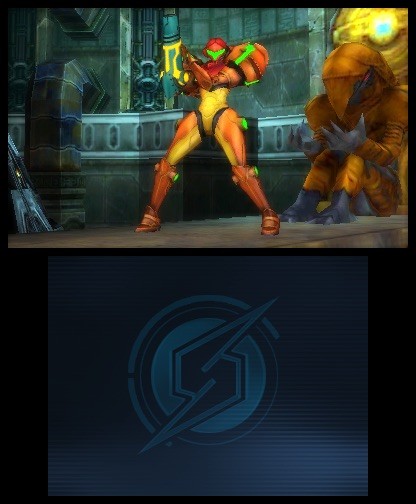 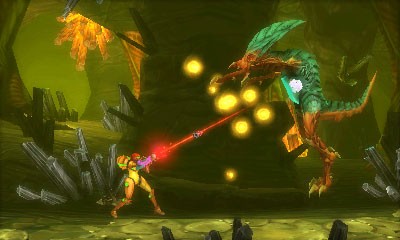 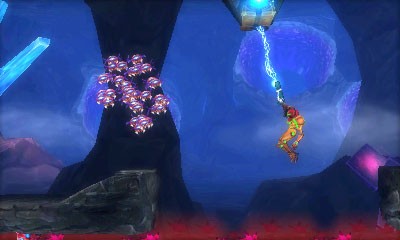 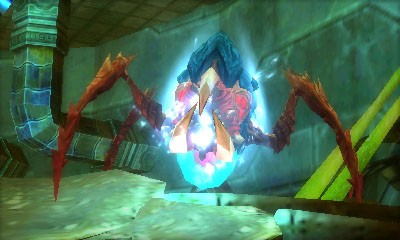 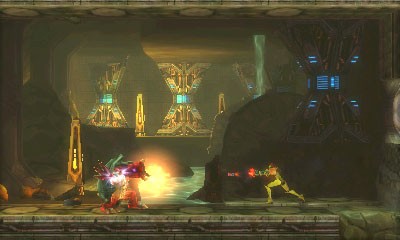 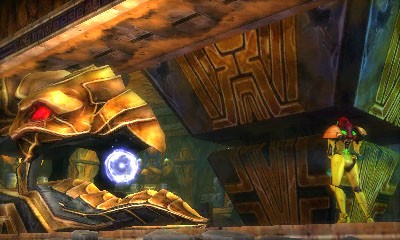 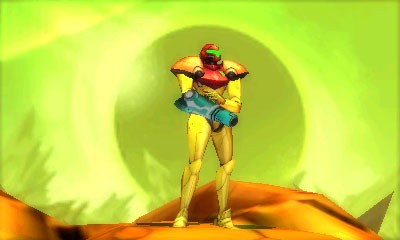 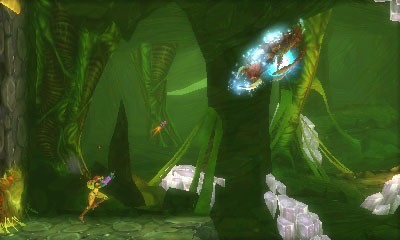 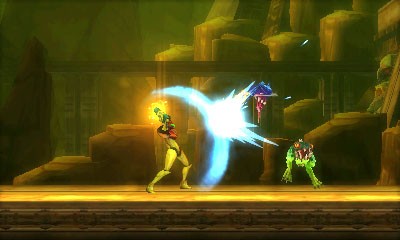 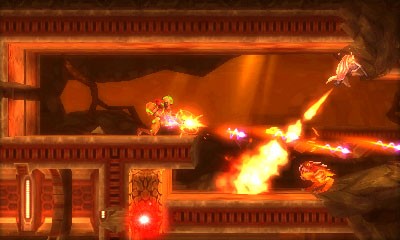 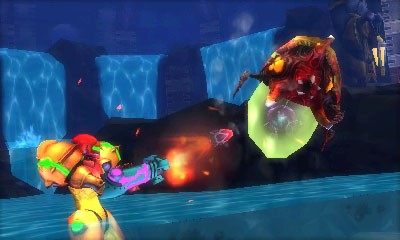 9.75
About Game Informer's review system
Concept
Samus journeys to planet SR388 to explore its puzzle-laden caverns and eradicate the Metroids once and for all in a remake that feels remarkably new
Graphics
MercurySteam was clearly inspired by the sharp designs of the Metroid Prime series, and these environments remain rich with detail
Sound
Metroid’s synth-like soundtrack is so haunting that I recommend isolating yourself with a pair of headphones for the full experience
Playability
Samus has a greater aiming range than ever, and the action remains engaging thanks to her new melee counter
Entertainment
A steady drip of upgrades and collectibles ensures that exploring the alien-infested planet of SR388 won't grow tiring anytime soon
Replay
Moderately High