Super Metroid is timeless. Even by today’s standards, the game manages to suck me in and keep my hands on the controller until the credits roll. Gameplay principles laid out in that 2D masterpiece are still making an impact on modern games like Shadow Complex. I wonder if one day we’ll look back at Metroid Prime with similar wonder. Seven years after its initial release, I still find myself overwhelmed by Metroid Prime’s diverse landscapes. I still thrill over solving Prime’s puzzles and eagerly hunt for the secrets tucked into every corner. Everything about Prime’s world, from its enveloping ambiance to its perfectly paced upgrades scattered like breadcrumbs through an alien labyrinth, scream that this world is worth. If you haven’t explored Tallon IV yet, what are you waiting for?

This package comes bundled with two sequels that iterate well on Prime’s blueprint. The hardcore will love Echoes’ old-school difficulty and challenging level layouts, which have you bouncing between light and dark worlds to solve puzzles. Echoes was also famous for introducing multiplayer to the Metroid series, but this is little more than a novelty today, and hardly ­worth ­revisiting.

One of my favorite aspects about the third entry, Corruption, is how it utilizes Samus’ gunship as an interactive prop. Not only does it blow obstructions out of the environment, it lets you fly to different worlds in the system. However, Corruption’s greatest contribution to the series is its Wii-specific control scheme. The first two titles received a lot of complaints about how they gave players only one analog stick with which to move and look around. Corruption fixes this by letting players aim with the Wii Remote in a much more natural way that few Wii shooters have been able to emulate. The addition of this control system for the first two titles makes me wish I could go back in time and experience them for the first time all over again. Those who haven’t already are lucky ­indeed. 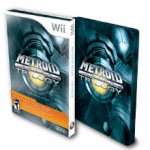 Metroid Prime Trilogy
Purchase More Info
9
i
Game Informer's Review System
Concept Exploration, action, puzzles – the Prime games have it all. Now they’re all in ­one ­package
Graphics The art design for all three Prime titles is top notch, and the visuals hold up even after all these years
Sound The Prime games have great soundtracks and some haunting, immersive ­audio ­effects
Playability One of the smoothest, most accessible shooters on the Wii is back, and it lends a helping hand to its two GameCube brothers by updating their control schemes
Entertainment Three games for the price of one; there is a lot of value on this disc, even if you’ve played one or two of these games before
Replay Moderately High