After seven canonical entries in the Metal Gear saga, fans have little choice but to play each new installment. Skipping a single chapter in Hideo Kojima’s signature series means that you will miss out on key character developments, plot points, and the ever-changing web of intrigue. Given Metal Gear’s tradition, this isn’t usually a problem – but Peace Walker is the first game in the main series that I have reservations about recommending.

Peace Walker follows in the tradition of 2007’s Portable Ops, building the legend of Big Boss as he slowly evolves into the villain of the franchise’s first entry. This sounds exciting in concept, but the narrative is disappointingly weak. The meager revelations are spread too thin across the 20-plus hour storyline, and the supporting cast members all feel like superfluous hangers-on (except Master Miller, complete with aviator sunglasses). Even the series’ hallmark boss fights are straightforward endurance bouts against robots and vehicles, though the designs of your mechanized foes are among the coolest in the series.

Peace Walker may not be everything fans expect from a game bearing the Metal Gear Solid name, but it is still an entertaining stealth/action experience. The missions themselves are better across the board, with more diverse environments broken up into smaller areas. Big Boss sneaks through forests, research labs, and excavated craters, completing equally varied objectives. You’ll also find no shortage of content; dozens of story missions and extra ops can keep you busy for hours, and new incentives and mechanics surface after the first (!) ending to hold your interest until the true conclusion.

Making Space
The massive amount of content in Peace Walker comes at a cost – it takes up a ton of space on your memory stick. The save file alone is 33 MB, with two installation options at 330 or 880 MB. You definitely want to install the game; it adds voiced dialogue that would otherwise be missing from certain conversations, and it makes the load times more bearable. If you haven’t bought a new memory stick in the last couple years, you should add that cost to Peace Walker’s sticker price.

On the battlefield, the game feels smoother than Portable Ops in almost every respect, though the PSP controls are still too clumsy to make the action sing. You have an even wider array of options to finish your objectives, and various types of guns, grenades, and non-lethal alternatives make every playstyle viable with the right equipment. I just wish it were easier to select your items on the fly; expect to eat some gunfire as you scroll through menus looking for your rations or rocket launcher. This is especially unacceptable during the boss fights, which already push the control scheme beyond its capabilities.

Peace Walker’s most significant feature is the addition of cooperative missions. Co-op adds a fresh spin on the classic stealth dynamics, allowing you to play through almost every mission as a two-player team (boss fights accommodate four). The ability to flank, distract, and overwhelm your foes is a sensation the series has failed to capture until now. Unfortunately, you can only engage in local multiplayer unless you also own a PS3, since the home console’s Ad-Hoc Party application is the only way to connect with people not in your line of sight. If you’re more of a lone wolf, you can still play through the game solo, though I found that a couple of the boss fights were inordinately difficult (and poorly balanced) without at least one partner.

Accomplishing missions is only part of Peace Walker’s gameplay. A large amount of your time will be spent managing the offshore military complex Big Boss and his army use as a base. It’s not nearly as dull as it sounds – in fact, just like with Portable Ops, I became obsessed with collecting skilled soldiers (which are now extracted with hassle-free Fulton balloons), deploying them on missions, and assigning them to teams in order to optimize my intelligence and research. Even better, you’ll eventually start production on your very own Metal Gear, though it doesn’t pay off until the final chapter of the game.

Peace Walker has a lot to offer, including tons of missions, cool multiplayer, and the sense of establishing your own mercenary army. Even so, a few critical shortcomings in the narrative and control departments keep the game from truly capturing the Metal Gear spark. Despite the fact that Hideo Kojima was directly involved in the game’s development, Peace Walker doesn’t feel like a fully realized chapter in the saga – but it still completes the mission. 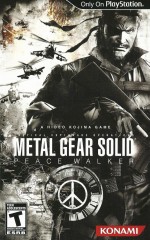 Peace Walker doesn’t feel like a fully realized chapter in the saga,
but it still completes the mission.

Purchase More Info
8
i
Game Informer's Review System
Concept Learn more about Big Boss’ past and how he built his army of loyal followers
Graphics Character models look great, animations are smooth, and the cutscenes are still impressive
Sound Voice work and music are top-notch, and I have to give a special nod to the infectious tune emitted by your marauding robotic opponents
Playability The three control schemes each make different sacrifices, so none of them feel perfect in all situations
Entertainment An improvement over Portable Ops in some respects, but a step back in others
Replay Moderately High