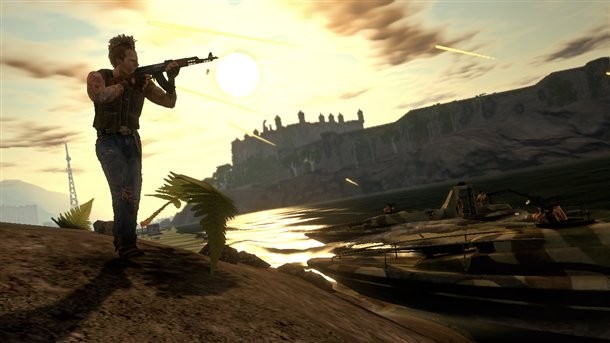 Pandemic loves controversy. Mercenaries: Playground of Destruction was banned in South Korea banned for depicting a war between the country and its closest neighbor, North Korea. Then Venezuelan president Hugo Chavez publicly condemned the sequel, World in Flames, as propaganda created to drum up support for an invasion. All this for a belated playground action game tagged as Grand Theft Auto with bigger guns. So, is Mercs 2 worth the fuss?

The concept certainly raises some approving eyebrows. As a money-grubbing merc more interested in paydays than politics, you're placed in the middle of a Venezuelan revolution. Your target: a drug lord who seizes power, reneges on a contract, and shoots you in the arse. Your merc must play the local revolutionaries, oil companies, pirates, and meddling nations against one another to gain information and put your revenge plan in motion. While you're on the blood hunt, you must complete fetch quests, races, escort missions, assassinations, abductions, and outpost assaults to earn favor and greenbacks. Your large paydays allow you to purchase any tool of destruction you see fit. Artillery strikes, bunker busters, RPGs, tanks, choppers, assault boats, you name it - if it goes boom you can buy it.

While drowning enemies in rubble with a barrage of chopper missiles is a blast, the action often stumbles on itself. Environmental obstacles impede your movement; forget hiding in the shrubbery, by the time you wiggle yourself free from the entangled branches you'll likely be dead from enemy gunfire. The fast-paced action makes shooting from the hip a necessity, and thankfully your merc fires accurately on the run. So why is it so hard to hit an enemy when you take the time to zoom? The air support system is equally questionable. To call an air strike, you often must throw a smoke grenade on the target you want obliterated, then run like hell to get out of the way. Wouldn't it be more effective to use binoculars to paint the targets from a distance so you don't have to dodge your own daisy cutters? Furthermore, you cannot call air strikes from vehicles, which means you must get out of your armored tank in the midst of gunfire to throw the damn grenade.

The lack of tactical savvy is fitting considering the zombie-worthy AI. Venezuelan civilians can't circumnavigate abandoned vehicles, dense enemy soldiers continually take over gun emplacements where you just smoked seven guys, chopper pilots frequently dump supplies in rivers or on top of buildings, and lowly grunts sent to capture outposts loiter in the South American sun rather than securing the buildings. These soldiers should be nominated for Darwin Awards.

These nitwits ruin even the co-op experience; attacking factions with a friend is underwhelming given their feeble resistance. Furthermore, many of the vehicles don't give the passenger anything to do - you can't even shoot out the window while riding shotgun. I suppose it's fitting that Mercs 2, like most topics bearing the weight of political posturing, is ultimately flaccid. But that doesn't stop me from expecting more. 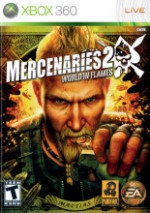 Glitches and Frustrations Pile Up to Deflate this Venezuelan Romp

Purchase More Info
7.25
i
Game Informer's Review System
Concept Grand Theft Auto with a military arsenal
Graphics The attractive environment is compromised by constant pop-up
Sound Repetitive lines from your PMC employees will make you wish it were a lone wolf game
Playability Simplistic controls get the job done, but could use some fine-tuning
Entertainment Turning Venezuela into a smoldering war zone sounds fun, but the vacuous AI spoils the experience
Replay Moderate