Time machines are expensive. They don’t even exist, so you have that working against your budget from the get-go. Don’t worry – Capcom has your back. You don’t need to time-travel back to the NES era to play the newest 8-bit Mega Man game; the tenth entry in the Blue Bomber’s classic series has arrived on the downloadable market, and it’s packed with even more old-school goodness than its predecessor.

If you’ve played any Mega Man game in last two decades, then you already know the basics. Eight robot masters are up to no good, spreading havoc and corrupting mechanical minions across their themed levels. The bosses of Mega Man 10 are some of the best in the series, featuring tight, rhythmic battles; the likes of Sheep Man and Nitro Man make for some gripping fights, though Dr. Wily’s final forms leave a lot to be desired. Diehard Mega Man fans will be disappointed by the ease with which the mad scientist’s ultimate weapons are destroyed, but abused gamers may find the softened finale a nice break.

Weapon selection in Mega Man games has traditionally been performed in menus or by using the shoulder buttons of modern controllers. Mega Man 10 plays well across the board, but if you use the Wii remote, beware that the A and B buttons have been mapped to on-the-fly weapon selection. The game is hard enough without having to worry about your finger slipping and firing Rush Jet at your enemy. Be sure to play with a classic controller or nothing at all on Wii. To compensate the 360’s terrible d-pad, I recommend snagging a Genesis-esque controller designed for fighting games. As usual, the PS3 controller is perfect for Mega Man. Choose your weapon wisely.

Each level of Mega Man 10 is polished to perfection. Capcom had 8-bit game development nearly mastered back in the ‘80s and ‘90s, but its skills have somehow gotten better with time. In Commando Man’s stage, you’ll intentionally sink into quicksand to destroy entrenched enemies. Navigating the fragile platforms of Chill Man’s glacial level adds an interesting don’t-break-the-ice suspense. Additionally, Dr. Wily’s fortress is among the best in the series, containing the most satisfying mini-bosses I’ve ever dismantled. Even the infamous boss rematches are a blast, as you finally get to deduce all of their weaknesses.

If Mega Man 9’s unrelenting difficulty held you back from enjoying the game, this is the perfect entry to try again. Mega Man 10 incorporates a straightforward easy mode; tricky spike pits have convenient platforms floating above them, enemy numbers are reduced, and robot masters pull a few punches. The real beauty of the reduced difficulty is it curbs the frustration while preparing you for normal and hard mode playthroughs.

The core game of Mega Man 10 is easily worth the price of admission by itself, but there’s even more to sweeten the deal. Proto Man returns as a playable character, but this time he’s selectable immediately instead of as DLC. Mega Man’s older brother adds diversity to the simple gameplay mechanics; he can charge shots, slide, and block projectiles with his shield, but at the cost of receiving double damage and shooting fewer bullets. His unique attributes require you to rethink how you approach the game, and his vulnerability instills a constant fear of death. Powering through Mega Man 10 with Proto Man is as harrowing as it is rewarding.

Mega Man 10 marks the debut of challenge mode, a new feature to the series. Within, you can complete tons of various skill-testing objectives, each entertaining exercise emphasizing a different key gameplay mechanic. The simple yet fulfilling tasks range from navigating perilous platforms to destroying a set of air-themed enemies. I found challenge mode to be a fun and refreshing distraction when I got stuck on tough parts of the main game. After being pounded into the dirt by Chill Man, completing simple challenges renewed my morale before attempting another assault. Speaking of Chill Man, after reaching (but not necessarily beating) a robot master, you unlock them in challenge mode for practice. Not having to trek through long stages to try your hand at brutal bosses is a welcome time-saver.

Overall, Mega Man 10 offers all the nuts and bolts a diehard blue bomber fan could want in a retro sequel, while boasting even more content than Mega Man 9 with all its DLC combined. The game's technical ambitions are modest and it's not a life-changing experience, but it delivers nostalgic fun in truckloads. Franchise newcomers who crumbled at Wily’s merciless hand in the past shouldn’t shy away from this great downloadable title.

8.75
About Game Informer's review system
Concept
Mega Man 9 was great, so here’s some more!
Graphics
There’s something beautifully simple about 8-bit sprites on an HD TV
Sound
Not the best Mega Man tunes ever, but still mind-stickingly catchy
Playability
It plays like a Mega Man game
Entertainment
Each playthrough is more fun than the last
Replay
Moderately High 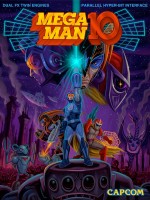