EA took a chance with the latest installment of Medal of Honor, moving the series from its World War II origins to a contemporary setting. It’s no secret that the franchise has lost its way over the years, and it has the declining review scores to show for it. Those who pinned their hopes on the change in venue fixing the problems are likely to be disappointed by the results.

The single-player campaign isn’t bad, but it hardly feels inspired. If you’ve played any of the modern-day military shooters, you’ve experienced most of Medal of Honor’s set pieces – a helicopter-based rail shooter segment, a section where you paint targets for air support, and other levels where you and your bearded buddy sneak through camps as snipers. Medal of Honor’s campaign lacks the excitement that would help it stand tall against the considerable competition. Character animations are gimpy, weapons feel slightly underpowered, and the AI is downright suicidal. This works to your advantage when enemies show a complete disregard for cover, rolling out of safety to stake out firing positions in the open.

The story is standard fare, with players taking on a variety of raids and infiltration missions throughout Afghanistan. The narrative switches perspective several times, but since none of the characters are particularly memorable, it’s tough to care too much about what’s going on. The pacing bounces around a bit, too, with one nighttime ATV section in particular dragging on too long. (And don’t ask me why they chose two of the loudest vehicles imaginable for the nighttime raid, either.)

Admittedly, a lot of people won’t bother with the campaign. After all, the biggest draw for most military shooters is the multiplayer. Battlefield alums DICE took on the task for Medal of Honor, and while the experience is technically competent, it ultimately doesn’t have the same spark as the developer’s flagship franchise.

There are three classes in multiplayer – riflemen, Special Ops, and snipers. Each class levels up independently, with experience unlocking new gear. There aren’t any Modern Warfare-style perks, so you know that every player you face on the battlefield can take as many bullets as the next.

Combat Mission is the most ambitious of Medal of Honor’s multiplayer modes. Coalition forces must work through a series of five connected missions while the insurgents try to prevent them from succeeding. For instance, in the Mazar-I-Sharif Airfield level, the Coalition starts on the outskirts of a dilapidated airfield. Their ultimate goal is to download data from a laptop on the far end. To get there, the team must destroy a roadblock (allowing tanks to pass farther into the battlefield), blast through some hangar doors, secure an area with the help of a mounted rocket launcher, kill enemies around a downed helicopter, and then work toward the building containing the computer. This fast-paced mode is complemented well by the game’s generously short respawn times.

Sector Control is essentially Battlefield’s Conquest mode, with two sides fighting to control three objectives. In Objective Raid, Coalition forces have to defend a pair of objectives from enemy sabotage.

As players rack up score chains – points earned racking up kills, meeting objectives, and supporting your team – they’re rewarded with offensive and defensive bonuses. You can, for example, choose to rain fire on the opposing team by calling in a mortar strike, or put a UAV online to temporarily display the enemy locations on your radar. Better still, you don’t lose this bonus ability when you die – though your score chain will be reset.

The game’s eight maps are diverse, drawing inspiration from pivotal moments in the single-player campaign. Mazar-I-Sharif provides plenty of hiding spots, as players sprint from hollowed airplane shell to hangar and back. Snipers will undoubtedly fall in love with some of the game’s more urban settings, including Diwagal Camp, which features insurgent emplacements in caves perched above the village’s mud huts.

The Shahikhot Mountains map unfortunately highlights a larger problem with the game’s balance. Defenders are holed up in a small camp tucked into a snowy mountaintop. With only a few paths into that camp – most of which are easily monitored by snipers – attacking quickly becomes futile. After a few waves of spawns are neatly killed, defenders rack up the killstreaks and can then use the bonuses to ensure that the momentum doesn’t shift. Once a team has gained the upper hand, it’s quite difficult to stage a comeback when the enemy team can blast chokepoints with rocket barrages. Teams could work the score chain system to their advantage on offense as well, unleashing a coordinated hoard of rockets and mortars.

The obvious solution for comebacks is to stop dying, but the spawn system doesn’t do players any favors. If you’re on the insurgent team, you’ll spawn in predetermined points. Coalition players who spawn on teammates don’t get to specify which member they want. The AI is supposed to invisibly link players into predetermined squads and use that to choose optimal positioning, but it often plopped me down right into an enemy’s sights. This works both ways. I’d be in the middle of blasting someone apart when one of his teammates would pop up beside him out of thin air. It’s easy to take advantage of their temporary confusion and make it a two-fer, but those kills feel hollow.

All the parts for a great multiplayer experience are here – class unlocks, a variety of familiar modes, lots of guns – but they don’t come together in a way that makes Medal of Honor a must-play shooter. Military buffs may enjoy the game on some level, but in such a densely packed genre, EA must try harder to stand out. 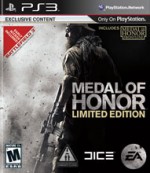 It doesn’t do anything new or risky, but Medal of Honor is an adequate shooter. That may not be enough at this point.

Purchase More Info
7
i
Game Informer's Review System
Concept Transplant the Medal of Honor series away from its usual World War II setting to modern-day Afghanistan
Graphics The desert environments are convincing enough, but the character models are bland. EALA and DICE did a great job keeping a visual parity between the campaign and multiplayer modes
Sound With a proper sound system, you’ll feel the gun battles in your gut
Playability The single-player mode’s default aim assist does everything but pull the trigger for you
Entertainment It doesn’t do anything new or risky, but Medal of Honor is an adequate shooter. That may not be enough at this point
Replay Moderately High