More than 20 years ago, Alan Emrich coined the term “4X” (Explore, Expand, Exploit, and Exterminate) in a preview for Computer Gaming World. The game being described was Master of Orion, and the strategy genre owes much to the classic title; it is essentially the grandfather of all space 4X that came after, and living up to that nostalgia and innovation is a daunting task. This revival takes aspects of Master of Orion and Master of Orion 2 and streamlines the experience to make it much more accessible. Giving everything a modern coat of polish and paint has resulted in an enjoyable 4X experience, even if it’s not quite as complex or deep as hardcore genre fans may desire.

Before getting into the action, you pick a race to complement your playstyle. I gravitated to the xenophobic Silicoids, an outcast race that can handle intense environments and eats rocks, so they benefit from zero food consumption. The hive-like Klackon stepped into my second favorite seat, but for those who really like to min-max their experience, you can create a custom race with traits tailored to your specific needs. The races aren’t lacking for flavor or personality, and it’s fun to branch out of your comfort playstyles when you’re looking for something fresh. Gameplay is incredibly welcoming (especially within a genre known for intimidating newcomers), with a handy advisor available to let you know what you’re missing and offer suggestions. More experienced players can turn the advisor off, but it’s a comprehensive and useful way to learn the ins and outs of galactic conquest. The turn process also ensures that you’ve handled active units, production concerns, and technology before passing, so you always know exactly what’s going on. Espionage and spying are awesome, and implemented in an easy-to-use fashion that anyone can get into – even players that may shy away from these sorts of shenanigans in other titles. As you explore, you uncover new planets, make friends and enemies, and develop your colonized planets with all kinds of defenses and upgrades. Your decisions here tie into your overarching strategy, whether you want to be a warmonger, technocrat, diplomat, expansionist, or some combination of everything. The passage of time is dotted with other interesting world events, which are reported on with little news-broadcast cutscenes. GNN News offers insight when a strange new creature appears on space, when large-scale disasters happen, and when the balance of power shifts. World events and GNN help shake up the traditional turn structure and add variance and flavor to the strategy formula.

One of significant diversions from the franchise roots is the combat process. Turn-based battles are a thing of the past, giving way to real-time-with-pause fights, should you wish to take control of your units directly (auto-resolve is still the easiest way to handle ship battles). While I’m sure many purists will scoff at the lack of a turn-based option, the faster pace of real time worked for me. As much as I appreciate turn-based battles, I would rather get a few more games in with the time saved by the more modern approach. Master of Orion’s simplified nature works well in some areas, but it causes the experience to lose life in others. Technology trees are so streamlined that sometimes you forget you’re playing a unique race halfway through a game; things feel like they always end up in the same place. “Star lanes” keep your fleets and starships on tracks, effectively corralling the action and limiting mobility, forming disappointing bottlenecks.

Master of Orion is an incredibly polished iteration and a worthwhile return to the beloved franchise, but it’s entering a galaxy full of fierce competition as the space 4X genre has seen a big bang of resurgence over the last few years. Master of Orion boasts a lot to love for new players, and it’s one of the best entry-level 4X games out there, but older veterans may find themselves searching the stars for more complexity. 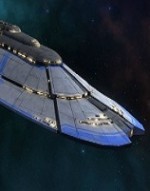 A modern coat of polish and paint has resulted in an enjoyable 4X experience.

Purchase More Info
8.25
i
Game Informer's Review System
Concept Conquer space with military might, technological superiority, or diplomatic deception
Graphics This may be the visual high point for 4X space titles. Everything looks exquisite, highlighted by planetary colonization scenes and raucous space battles
Sound Advisors for each race and narration bring out the flavor with a cool cast of voice actors, and the music keeps things suitably relaxed or intense as the situations change
Playability Incredibly welcoming, the experience is streamlined to accommodate those new to the strategy archetype, but there’s still a lot to take in
Entertainment A polished renewal of the classic franchise that’s more suited for genre newcomers than for fans looking for a highly complex strategy game.
Replay High