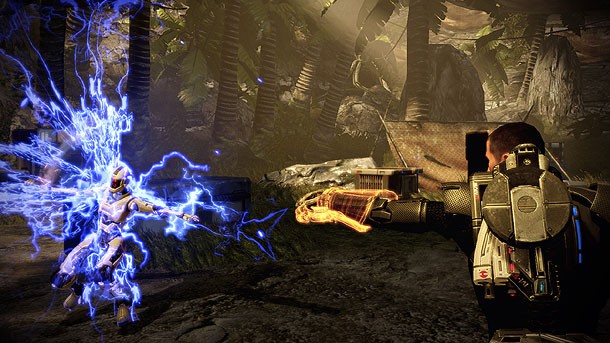 The second chapter in the Mass Effect trilogy is more of an enigma than the first, weaving enough moral ambiguity, ghost-like images, and misleading plot twists to make the writers of the TV show Lost take note. Who are the Collectors? What interest does the mysterious Illusive Man have in Commander Shepard? Where are the Reapers? Why has Cerberus come out of the shadows? Why is mankind the only species in the universe being hunted?

Lost has teased its viewership for years with mystifying answers that lead to even more questions, but in Mass Effect 2, the scribes at BioWare slowly pull the curtain away to reveal the answers you seek. By the time the credits roll, most questions are addressed, Commander Shepard’s role in the universe is cemented, and the last image that appears on screen makes the wait for Mass Effect 3 seem unfair.

If you import your save file from the first game, the connection you have with this adventure is heightened to the point that you’re doing yourself a disservice if you create a new character. The save transfer retains your character likeness, remembers all of the decisions you made, and ultimately delivers the sensation that you are sculpting the story and are not a passenger on a prescripted ride. The state of the universe is very much how you left it, and the decisions you make moving forward will carry over into Mass Effect 3. If characters died in the first game, they won’t return in this sequel.

Mistakes you made in the past could come back to haunt you. You’ll see the aftermath to decisions you thought right at the time. And don’t be surprised if you stop dead in your tracks to get a better look at familiar faces on the streets. These characters may be an old acquaintance, and if you talk to them, the conversation will play out like a chance reunion.

With this kind of depth, Mass Effect 2 revels in its relationships. The bond created between Commander Shepard and his or her crew is much stronger this time around, with their personal lives sewn tightly into the plot. As they come to know Shepard, their tormented histories, relationships with loved ones, and ghosts from their pasts are dissected. The cast is likeable, and their stories tug at Shepard’s soul in myriad ways.

The situations you are asked to dictate are not as black and white as the first game. Doing what you think is right at the time could backfire later, or lead to a teammate shutting down emotionally.

The narrative bounces between engaging mysteries and moments that attack your conscience, all while pulling you deeper into a game universe than you’ve ever been. BioWare’s scribes have not only created one of video games’ greatest stories with Mass Effect 2, they have redefined how stories are is told in this medium.

As familiar as this universe will feel for fans of the original game, the majority of the gameplay will feel alien. Most of the role-playing elements have been removed outright. Weapon and player customization – two confusing menu-driven distractions from the first game – have been stripped to the bones. Most of the role-playing content is replaced with modern day shooter conventions, such as regenerating health and limited ammo.

In my soldier class playthrough, I only discovered 14 different firearms. None of the weapons are technically better than the other – they just offer different functionality. You cannot apply individual upgrades to the firearms like you could in the first game, either. All upgrades (of which there are few) are automatically applied to every weapon in the same class. Likewise, the inventory system has been removed in favor of a similar armor upgrade system. Since this is all automatic, you no longer have to deal with making sure your team is outfitted with the latest gear.

The shift away from RPG-style customization may sound like a major setback, but the new format keeps the focus on the action. The combat scenarios deliver more excitement, not to mention a wider breadth of enemy types. Teammates no longer mindlessly shoot walls like they did in the first game. Rather than acting like flashbang victims, they demonstrate intelligence on the battlefield as they take cover, advance, and unload everything they can on the enemy.

BioWare also rethought the control mapping, allowing players to assign biotics to buttons and view cool-down meters mid-battle – both of which remove the need to visit the pause screen. From a tactical standpoint, you are no longer shoehorned into relying specifically on Shepard’s class specialties. You can snipe from ridges, create biotic and firearm combos, and even use melee/shotgun-style assaults. All of these options feel great, and are balanced to create exciting battles.

With its amazing storytelling and combat, it may seem BioWare can do no wrong, but this journey is littered with unpleasant minigames tied to planet mining, computer hacking, and lock bypassing. Each of these diversions are as mind-numbingly dull as they are repetitive in design. Given how heavily they tie into the gameplay, you’d think BioWare would have given them the same care that clearly went into the rest of the game. Although unwanted, the minigames don’t derail the experience. The only element of this finely sculpted game that stands out as a grievous error is the last boss’ design – its look screams X-Men more than it does Mass Effect.

The loss of RPG elements may hit some people hard, and the repetition in minigames may lead to yawns and tired eyes, but none of these faults hold Mass Effect 2 back from being a work of bold ambition, and one of gaming’s most exciting sequels.

The second chapter in the Mass Effect trilogy is an engaging enigma.

Purchase More Info
9.75
i
Game Informer's Review System
Concept Break down the walls holding storytelling in check by allowing players to continue the personal tale they created in the first game
Graphics Even more cinematic than the first. During story moments, characters interact with their environments, the camera frames each shot better, and facial expressions show a wider range of emotion
Sound The voice acting is excellent (although I’m pretty sure Seth Green thought he was recording an episode of Family Guy for one line). The score also flows beautifully in both the story and action sequences
Playability The gunplay is now as polished as the other components, allowing players to combo firearms and biotics, and turn to their teammates to get them out of a bind
Entertainment It’s a sequel of a new order, and one gaming’s most engaging stories
Replay High