Marvel vs. Capcom 3: Fate of the Two Worlds Review Like the X-Men’s Jean Gray, the fighting genre has risen from the ashes. Capcom is leading the fiery rebirth, finding success with Street Fighter IV by distilling the 2D fighting experience to its essentials, making it pretty, and hosting terrific online play. Since its announcement last April, hungry fighting fans have waited impatiently for Marvel vs. Capcom 3, hoping the company can hit it out of the park again. You can stop worrying. The long-awaited sequel will keep d-pads warm and arcade sticks clacking for months to come.

This entry continues the tradition of pitting stacks of memorable characters against one another. Capcom shaved the amount of Street Fighters down in favor of newcomers like Arthur from Ghosts ‘n Goblins and Amaterasu from Okami. The Marvel crew is the best assortment yet, with fan-favorite Phoenix entering the fray and oddballs like M.O.D.O.K. adding color. Fans upset that Marvel vs. Capcom 3 features only 36 characters (20 less than MvC 2) should relax. Every character has unique, robust move sets, a far cry from the previous game’s glorified palette swaps. The game features a cornucopia of over-the-top mayhem – Nathan Spencer grabs foes from across the stage with his bionic arm while yelling “get over here,” Deadpool yells “bang bang” as he unleashes a torrent of blazing gunfire, and Arthur is hilariously stripped to his boxer shorts.

The basic three-on-three tag team format from Marvel vs. Capcom 2 is intact, but the developers gave it much-needed renovation. Capcom trimmed MvC 2’s ultra-narrow input windows down to more enjoyable SF IV levels, and the resulting gameplay is smooth as butter whether you pick up a controller or an arcade stick. I had no problem transposing skills I learned in Super Street Fighter IV into MvC 3, removing the steep learning curve that accompanies some new fighters. All aerial launches and character exchanges are now executed with a single button, and the change makes learning the ropes of aerial combat a quick and satisfying process. Even if you’re new to the series, this game offers rewarding training and simple mode, a convenient, streamlined control scheme that maps key combos and special moves to single buttons. Accidentally wrecking your friends by button mashing is fun, but like training wheels, simple mode must eventually be ditched in order to contend with the big boys using traditional controls.

Despite being riotously entertaining, a few elements hold MvC 3 back. Character endings consist of art stills with text overlays, a huge disappointment considering Super Street Fighter IV had fully voiced and animated conclusions (and only one less character). Fans expecting the suite of online features accompanying Super Street Fighter IV should regulate their excitement, because MvC 3’s virtual arcade only has the basics like ranked and player matches, plus custom lobbies to recreate the “winner stays” arcade experience. SSF IV’s successful tournament mode and multiplayer team battles are inexplicably absent. Why Capcom didn’t simply borrow everything from its fighting cousin is a mystery.

Small gripes aside, you shouldn’t miss Marvel vs. Capcom 3 if you have even a passing interest in Capcom, Marvel, the fighting genre, or good games. This pugilistic prize mimics the polished, accessible reinvention of Street Fighter IV, forming another strong leg for the resurrected fighting genre to stand on. 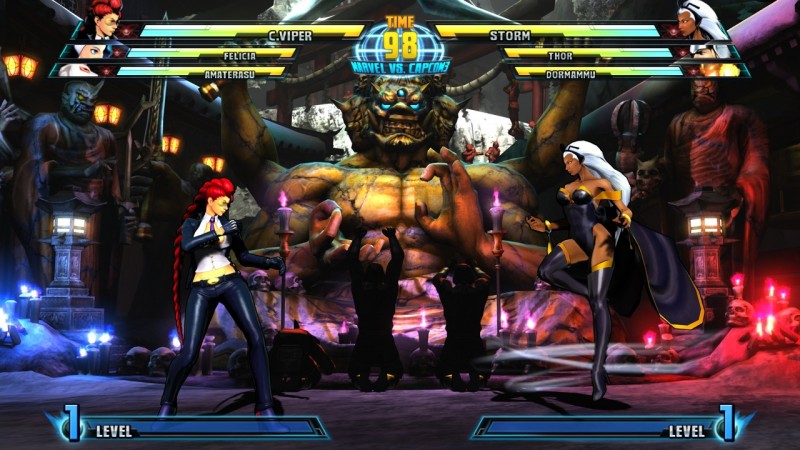 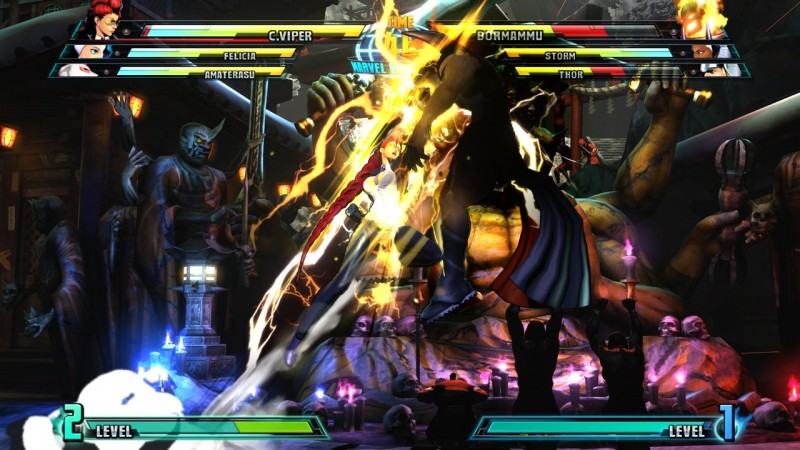 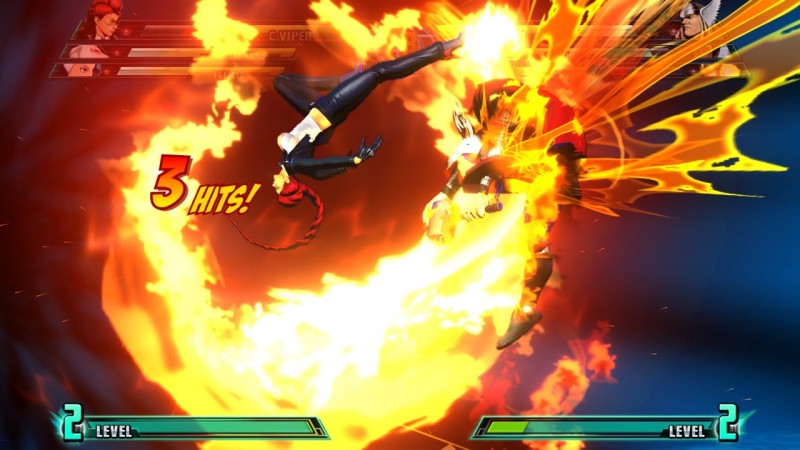 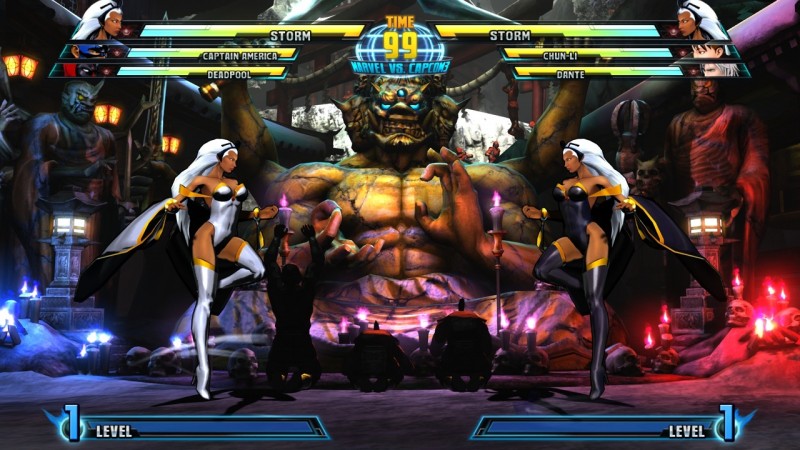 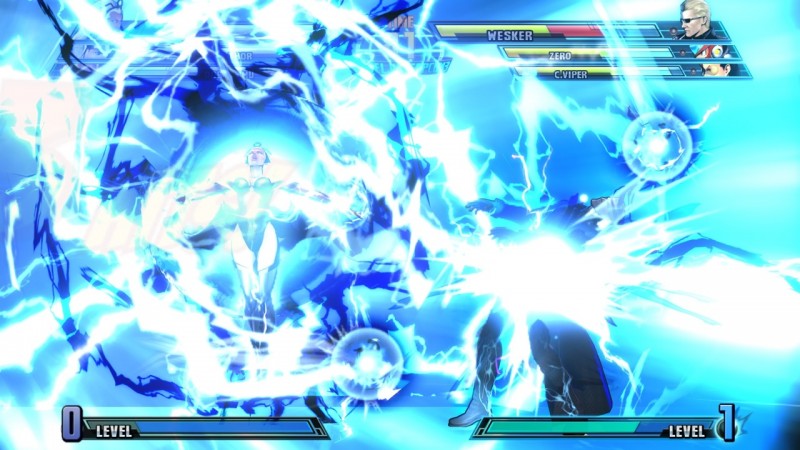 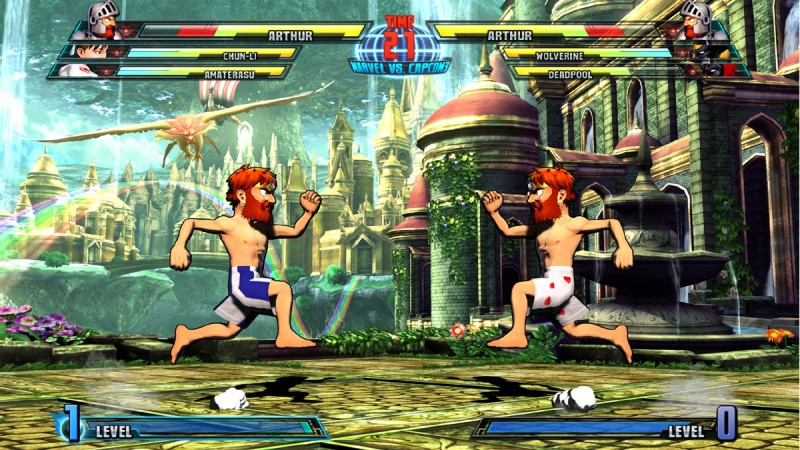 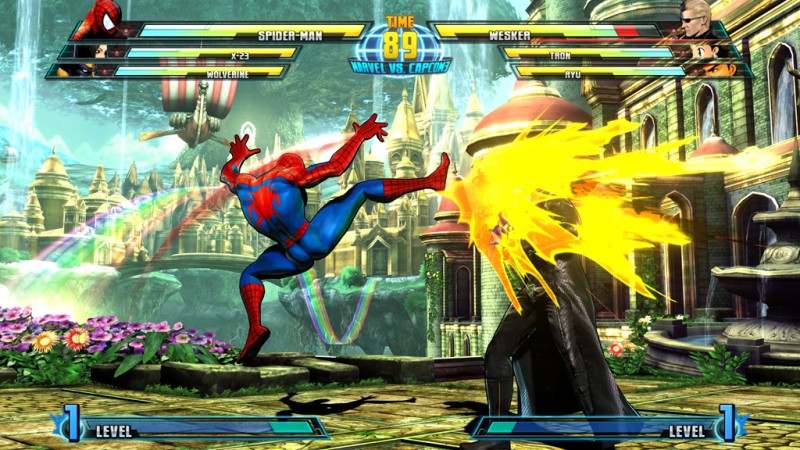 9.25
About Game Informer's review system
Concept
Give fighting fans the game they’ve been waiting 10 years for, and make it more accessible to newcomers
Graphics
Thick shading, colorful backdrops, and detailed character models do both universes justice
Sound
From classic Capcom tunes to familiar superhero one-liners, everything is authentic
Playability
Playing with a controller feels great, but using an arcade stick is heavenly. Make the investment
Entertainment
Grappling with the rich combo system and fighting friends will keep you busy for dozens of hours
Replay
High

Marvel vs. Capcom 3: Fate of the Two Worlds