A young boy who reads a Spider-Man comic book may walk away pretending that he can shoot webs out of his wrists. An adult who reads that same story may walk away thinking about how the world’s political climate is changing. Depending on who reads the comic, its story could be interpreted as an action-packed adventure or a political allegory. That’s the beauty of most comic books. They speak to different age groups in myriad ways.

Marvel Ultimate Alliance 2’s story had the potential to draw similar reactions from its players, as it is based on one of Marvel Comics’ most politically charged and action-packed arcs, Civil War. Viewed as a commentary on post 9/11 American civil liberties, this brilliant comic details the government’s attempted super human registration and the resulting backlash. The comic pulls no punches in its parallels to world events, and paints a bleak future for the world, even going as far to show Captain America (a character who wears the American flag on his chest) chained as an enemy of the world. The game dives into the heart of the story, splitting the world’s greatest heroes into two camps – those for super human registration, and those against it. While this creates an interesting dynamic in the character selection pool (Captain America and Iron Man are on opposing sides), the story in the game is stripped of its controversial views and shocking moments. The game focuses more on beloved heroes punch each other in the face.

This is a missed opportunity to tell a powerful story, not to mention an odd choice for a game’s foundation if the developer didn’t intend to see it through to its mind-blowing conclusion. Even if the story pulls you along aimlessly, -punching faces is what this game does best  Raven Software laid the groundwork for a powerful button-mashing experience with this series’ previous iteration, and Activision’s stand-in developer of choice, Vicarious Visions, didn’t miss a beat delivering the same thrills. The keyword being “same.”

From Spider-Man’s long-ranged web attacks to Wolverine’s up-close-and-personal claw strikes, the combat system feels like a well-worn glove, only now most of its glaring wrinkles have been ironed out. The new on-the-fly upgrade system removes the hassle of entering the pause screen, which is great for four-player co-op. The waypoint beacon is a non-intrusive way of pointing players in the right direction, and the healing/revival tokens remove the need to backtrack to a warp portal.

The one area where Vicarious took liberties is the implementation of the fusion attack. As cool as it is to see Gambit supercharging one of Storm’s tornados, these moves are far too powerful. They can wipe out a dozen enemies, topple bosses, and act as “Get Out of Jail Free” cards for tough battles. Why bother coordinating tactics with friends when you can just unite powers to clear out everyone? The fusion attacks also fail to elicit excitement in their composition. While several shining examples demonstrate the fusion attacks’ true potential, most of them utilize generic templates void of the characters’ unique powers.

The one area where this game hits comic fans with an undeniable uppercut is the roster, both for the playable characters and bosses. Along with Marvel’s heavy-hitters, B-team recruits like Penance and Songbird prove to be a blast to play. Thor and Hulk sadly cannot be played until a certain number of doodads are collected, but reward you well for your efforts. Cameo appearances are in great abundance as well. Altogether, the selection of characters delivers a complete view of the Marvel Universe as of Civil War’s writing in 2006. The last boss/playable character does not deserve the same praise. Let’s just say he makes the theatrical version of Deadpool look good.

Toward the conclusion of this game, Iron Man and Captain America exchange an awkward “I can’t believe that just happened” look. This odd moment captures my feelings on the game. The core action is top-notch, and the roster rocks, but the Fusion attacks and half-hearted story hurt the experience, turning a once great play into a punchless grind.

7.5
About Game Informer's review system
Concept
New gameplay additions adversely affect what could have been an enjoyable brawler
Graphics
The chaotic action paints a stunning picture, however, the original game’s amazing CG cutscenes are replaced with crudely animated in-engine clips
Sound
The roaring soundtrack screams supehero epic, but the characters interrupt it with groan-inducing one-liners
Playability
Outside of the balance breaking fusions, the controls are spot-on, and the diversity in hero choices bring variety to the fray
Entertainment
Comic fans will get a kick out of the character choices, but the action doesn’t retain the brilliance of the original
Replay
Moderately High 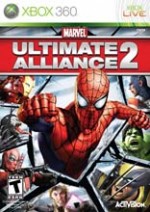