The Mario vs. Donkey Kong franchise isn’t up there with the heavy hitters in Nintendo’s stable, but it’s been a consistently quality puzzle series. Players guide mechanical mini Nintendo characters through a puzzle board to an exit door in a style similar to the classic Lemmings games. Donkey Kong steals away with something or someone (in this case Pauline from the original DK) and Mario has to go after him with his legion of toys.

Once you start up a Mini Mario, it keeps moving until you clear the puzzle. In MvDK 2 you’d have to swipe them to move, flick up to jump, and tap on them to make them stop. Now you can count on them to perform these actions themselves, and it makes a big difference in how much more in control you feel. Another great move is the switch to stretchy steel girders, allowing you to effortlessly draw lines between platforms instead of tapping an unreliable grid. This also allows for better boss battles against DK in which you build platforms to get minis up to the mischievous gorilla so they can electrocute or drop bombs on him. It’s nice to play battles with the main mechanics rather than a weird cannon minigame like in MvDK 2 (though the cannon does return briefly). The main career mode isn’t all that difficult. I never found myself racking my brains for a puzzle solution. Getting from point A to B is quite straightforward, but figuring out how to quickly grab every pickup scattered throughout the board can be tricky. I guess it’s good that a casual player can get through easily while the puzzle expert can try to ace everything and, in turn, unlock the many bonus stages. Fortunately, there is a plus mode for puzzle pros that allows you to go through all the stages over again with the added difficulty of getting minis through the door in a specific order.

Level creation and sharing returns, improving on the advancements made in Minis March Again on DSi. You can store up to 160 levels that you or other creators have made (including plenty from Nintendo itself). Scanning through stages is easy, and you can download one in seconds and start playing it. After completing the stage you can rate or even decide to “follow” the creator to keep track of his or her future levels. There’s also a weekly challenge from Nintendo in which players are given a template of limited objects to create something unique. This endless stream of player levels mixed with plenty of unlockable stages will keep MvDK fans busy for quite a while.

8.25
About Game Informer's review system
Concept
Streamline the puzzle mechanics from MvDK 2 and build upon some concepts from last year’s DSi-only entry Minis March Again
Graphics
The wind-up minifigures are as cute as ever. Look out for the new Mini Pauline
Sound
A great mix of new songs and remixes of old Mario tunes
Playability
The focus on manipulating the environment rather than controlling every mini action is quite welcome
Entertainment
While this leans a little towards the easy side, constantly changing gimmicks keep it interesting
Replay
Moderately High 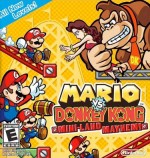