Mario Tennis Gets Back to Basics, Goes Online
by Matt Helgeson on May 16, 2012 at 11:30 AM
Publisher: Nintendo
Developer: Camelot Software
Release: May 20, 2012
Rating: Everyone
Reviewed on: 3DS It’s been a long time since we saw a new Mario Tennis game. The series’ last release was Mario Power Tennis: New Play Control in 2009, a Wii re-release of the GameCube game featuring enhanced graphics and new motion controls. I enjoyed Power Tennis (both times), but the balance-breaking power shots were far too vital to winning. In response, Camelot has scaled back the wackiness with Open, which translates to a casual tennis game that plays it fairly straight.

While the courts are still themed after past Mario games, they are free of any gimmicks or moving parts, so winning or losing is based on skill alone. Though the gonzo power shots of Power Tennis are gone, special shots are implemented by placing colored markers on court when your opponent hits a weak return shot. Each color corresponds to a different shot, which varies from wildly arcing returns to drop shots that die upon bouncing. While they are certainly important to master, they don’t overtake the flow of the game. First, they are positional, so you have to be able to get to the spot to use them. Second, you’re definitely able to return them if you play them correctly – much more so than the power shots in Power Tennis.

This 3DS game doesn’t make too much of the system’s capabilities. It supports StreetPass (is anyone still using that?) and Miis (which you can customize with a variety of unlockable gear that adds to your stats). However, Camelot mishandled the 3D effects. You can access a zoomed in, behind the player view by holding the unit upright, which automatically disables the 3D. If you hold it flat, you get a traditional isometric view that technically displays in 3D, but adds little depth or impact. After experimenting with the options, I played with the 3D slider turned off.

The expected minigames return, though there are not as many as in Power Tennis. Galaxy Rally (where you must rally with your opponent to hit a certain number of returns), Ink Showdown (where the giant squid ball machines will obscure your view with ink blobs), and Ring Shot are fairly standard stuff. However, the Super Mario Tennis mode is ingenious. The original Super Mario Bros. is displayed on the backboard, and it scrolls as you hit coins, blocks, and enemies with the ball. You can even hit warp pipes to travel up and down to hidden areas and aim at the flagpole to end the level. It’s just another example of Nintendo’s endlessly inventive method of recycling its past.

For the first time in series history, Mario Tennis Open offers full online multiplayer – both singles and (impressively) doubles. It also has local wireless multiplayer. Based on my experience, both modes work smoothly. This isn’t the tennis revolution that some might have hoped for, but it’s a solid new feature in a franchise that’s built its popularity on slow, incremental improvement. 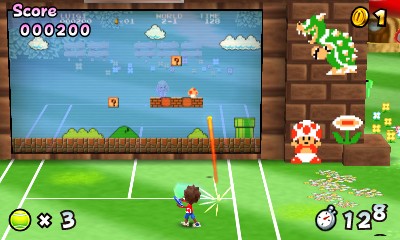 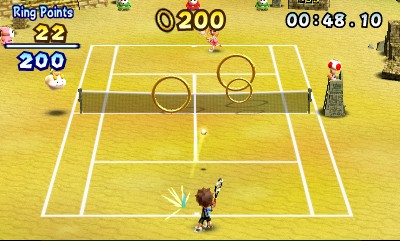 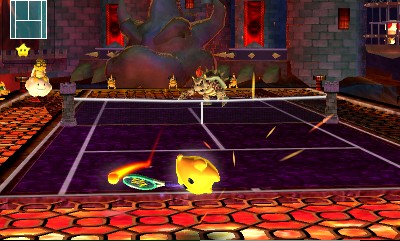 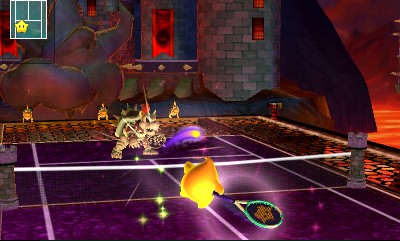 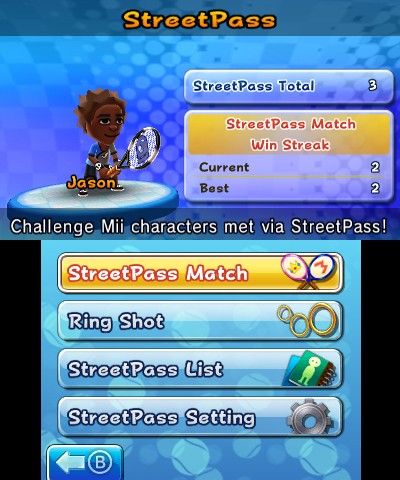 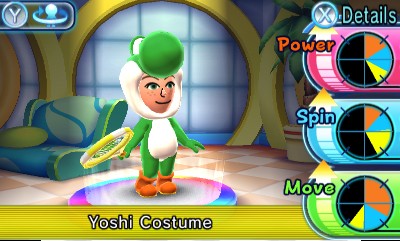 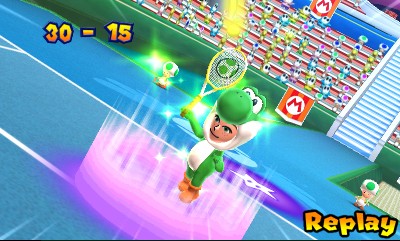 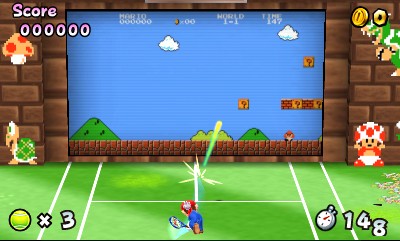 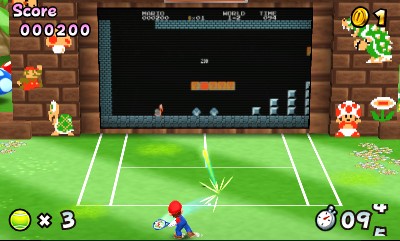 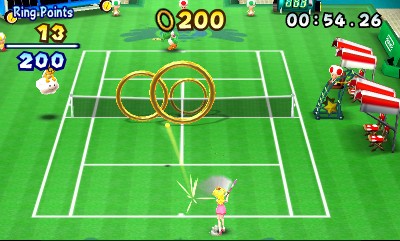 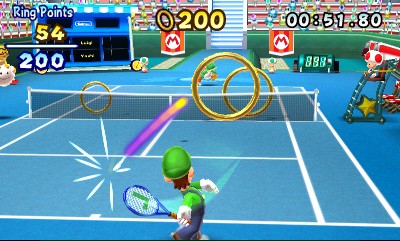 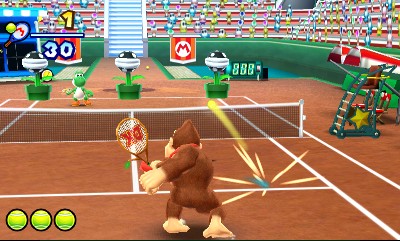 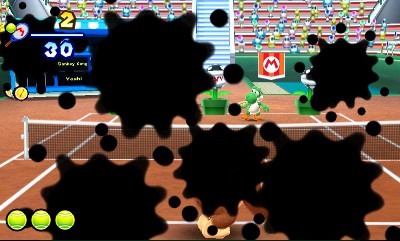 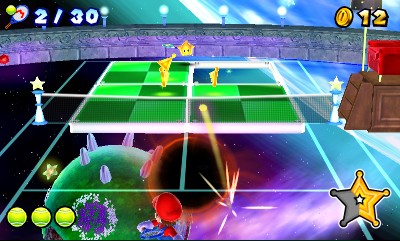 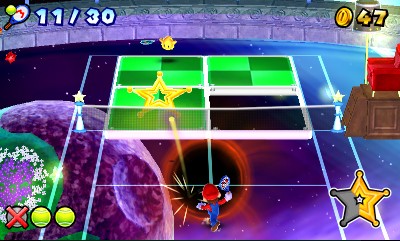 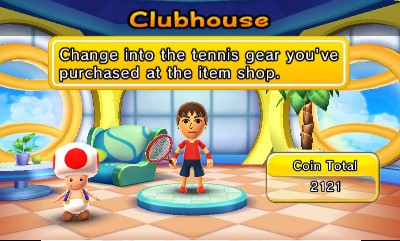 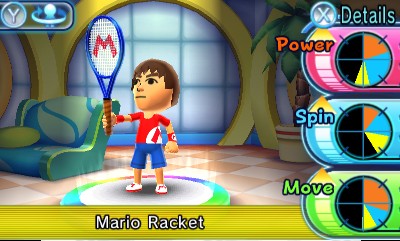 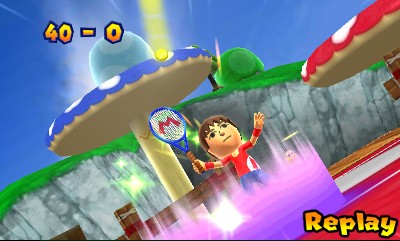 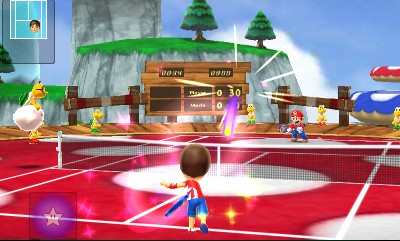 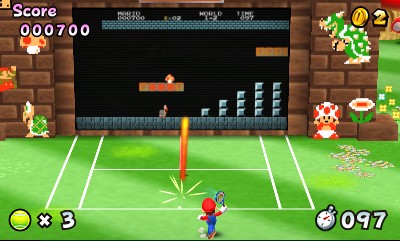 Mario Tennis Open scales back the gimmicks and adds online multiplayer to the series' already-sound foundation.

8
i
Game Informer's Review System
Concept Mario scales back the more gimmicky aspects in favor of responsive, arcade-style tennis
Graphics The game makes the most of the hardware with crisp visuals
Sound The sound effects and music are what you’d expect: forgettable
Playability With the focus off of unbalanced power shots, the action feels more realistic and fluid
Entertainment It’s a quality game, though I wonder how much more Nintendo can do with a simple game like tennis
Replay Moderate