If you've followed Mario's career, you know he and his friends are multi-talented. Aside from their world-saving skills, Nintendo's cast of characters set aside time for friendly competition in things like life-size board games, go-karting, and sports. With Mario Sports Superstars, Nintendo lumps five activities together into one package. Unfortunately, while they are all fun to play, none of them offer depth or compelling reasons to continue playing after the whistle sounds.

The game bundles soccer, baseball, tennis, golf, and horse racing together. They all provide pick-up-and-play gameplay that makes them accessible to players of any skill level. I enjoyed how quickly I was able to jump into a game and play competently against the beginner-level A.I. opponents, even pulling off special shots in my first soccer match. However, the novelty wears off fast, as you can only play essentially the same match so many times before craving more.

Each sport features solid mechanics that makes competing initially exciting. Golf and soccer are great to jump into, but my favorite sports were tennis and baseball. Those two sports not only feature the soundest mechanics, but they easily lend themselves to arcade-style action. Sadly, even those sports end up being little more than diversions. After just a few matches, the addictive loop of improvement slows dramatically as your skills plateau.

With minimal stat-tracking, a lack of a progression system, and no long-term play options like seasons or tours, I don't feel compelled to return to any of the modes outside of the allure of the simplistic gameplay and working to find the best characters for my playstyle. Luckily, that aspect does add some interesting wrinkles into the mix.

When selecting your characters, you must take into account their individual attributes. A balanced character like Yoshi might be a good foundation for your team, but you probably want to include a power hitter like Donkey Kong in your batting order in baseball, or a speed-demon like Baby Luigi as a forward in soccer. For baseball and soccer, you fill in the rest of your team with generic characters including Toads, Shy Guys, or Magikoopas. I enjoyed being able to draft a baseball team full of characters, each with different strengths to craft the perfect lineup. I wish that the other sports supported a similar layer of strategy, but they don't.

Horse racing stands out as the oddball of the group. With double jumps, boost pads, and obstacle-laden courses, horse racing is by far the most arcade-focused of an already loose and casual collection. Despite its wacky approach and dissonance with the other sports, I was surprised by how much I like horse racing thanks to its fast-paced loop of avoiding trees and hedges while collecting stars and carrots for energy. There is even an offshoot Stable mode where you can bond with your horse. I wasn't particularly drawn to Stable, but between caring for your horse, customizing it, and searching for items on walks, it's strange that this sub-mode of horse racing has more layers to it than any one sport included in Mario Sports Superstars.

You can play each of the five sports in exhibition or tournament. Exhibition allows you to customize your experience by tweaking some of the rules to your liking for one-off matches, while tournament lines you up against three consecutive opponents in a bracket-style tournament with standardized rules. You can also take the competition online, which works well if you can find players - splitting the player-base between five modes with custom search parameters seems to have hindered the pool of competitors in matchmaking.

As you play though the different modes in Mario Sports Superstars, you earn coins, which are used to purchase packs of cards. These cards unlock hidden characters and courses, but they mostly serve to fill out your fairly inconsequential collection.

Also hidden beneath the menus is a Breakout-clone that uses Amiibo cards called Road to Superstar. In this mode, you lay out up to three paddles spawned from Amiibo cards - regular Amiibos do not work - that return balls to destroy bricks and take out enemies. The mode is surprisingly challenging, but if you've played the classic Breakout game, it's nothing new.

Mario Sports Superstars delivers five fun, surface-level sports experiences in one package. Individually, these sports would be unable to stand on their own. However, as a compilation, the variety helps compensate for the lack of depth. Still, the more I played, the more this package felt like a collection of minigames than a value-packed compilation. 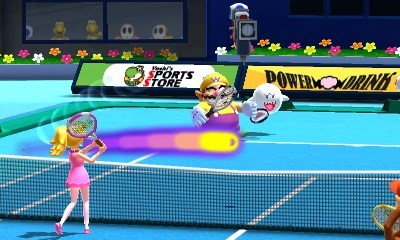 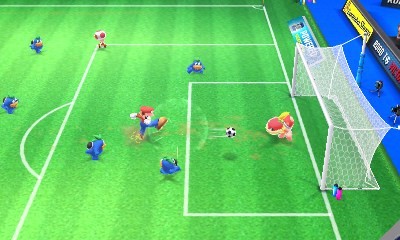 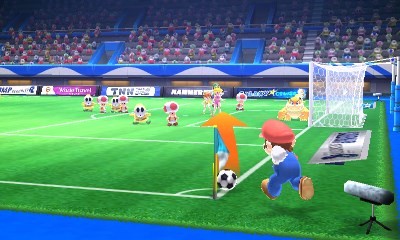 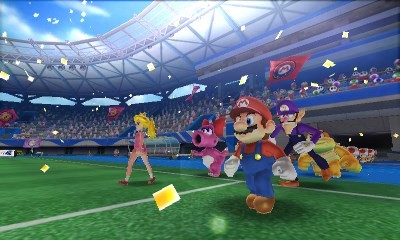 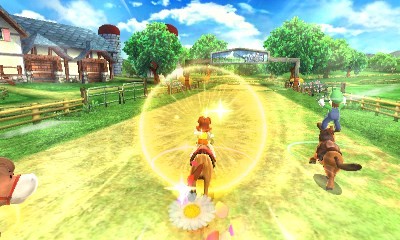 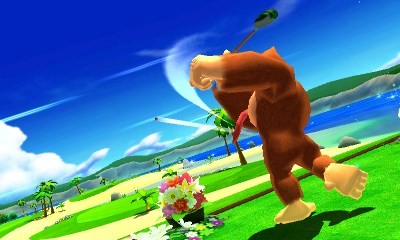 6.5
About Game Informer's review system
Concept
Compete in five different sports as various characters from the Mario series
Graphics
Characters and environments look good in motion, but repeated animations are immediately noticeable. Seeing Wario on a horse never gets old
Sound
Upbeat music sells the arcade experience, and the recognizable character voices give the action more personality
Playability
After a quick tutorial, each sport is easy to pick up and play with little difficulty curve
Entertainment
Despite the package including five sports, their shallow nature means the novelty wears off fast
Replay
Moderately low 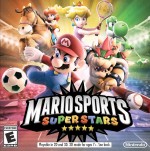