Mario Party has always been about players taking turns to roll dice and traveling across a game board, with a smattering of minigames to break up the monotony. Star Rush, the latest entry in the series, takes some big liberties with that core concept, ditching the turn-based approach of its predecessors in favor of simultaneous play. The linear board-game levels are gone, and in their place are a variety of completely open maps that scatter rewards and objectives throughout. The result is an experience that delivers a markedly different experience and shakes up the formula, for both better and worse.

Rather than focusing on one main mode with accompanying peripheral modes pushed off to the side, Star Rush presents each mode as equal, with the only distinction being how long it takes to unlock each mode. From the frantic Toad Scramble and Balloon Burst (which have four characters moving simultaneously through an open, non-linear board) to the beat-match mode Rhythm Recital, Mario Party: Star Rush presents myriad modes to play either solo or with friends.

My favorite mode is Balloon Burst, which comes closest to a traditional Mario Party experience. Though I prefer the linearity of past Mario Party games to the structure of Star Rush, I enjoyed the mad rush that occurred every time a new ally character popped up, as each one you collect rewards you with bonuses like modified dice and bonus abilities.

I was pleasantly surprised by the strange Mario Shuffle, a 1v1 mode that gives both players three cardboard cutouts and two dice. Each team rolls its dice, then decides which piece uses each roll in an effort to get to the opponent’s side of the board. The strategy of deciding which piece to apply the rolls to makes you factor in the spaces that can either send you forward or push you backwards, and that jumping an opposing piece stuns them for a turn, while landing on them sends them all the way back to start. My most thrilling moment with Star Rush came from this mode, as my opponent and I struggled to get our final pieces to the end – but with them both in the same lane, we kept impeding on each other’s progress.

Unfortunately, the remaining modes fall short. Rhythm Recital challenges you to play along to several iconic songs spanning Mario’s three decades. I loved that I could select songs ranging from the Overworld Theme from the original Super Mario Bros. to the Super Bell Hill theme from Super Mario 3D World, but the instrument parts feel only vaguely related to the music being played. Rather than playing the actual music from the games, you’re relegated to adding small flourishes and additions to the songs as they play automatically. Coinathlon is a repetitive mess of a mode where you play the same three coin-collection minigames on repeat. Each coin you collect moves your character a space forward; the first to complete a set number of laps wins.

Most of these modes are anchored by the minigame collection, which features a diverse array of hit-or-miss offerings. I liked minigames like one where you shoot balls of paint at a picture to try and cover more space than your opponent, and another where characters ride Wigglers around and smash into each other. For every good minigame, however, there is another I hated to see pop up. One made me blow into my 3DS’s microphone until I was blue in the face to move sailboats down a course, while another does nothing more than deliver a subpar match-three puzzle experience. Even the special boss battles, which are among the strongest minigames available, only offer a handful to cycle through.

Mario Party: Star Rush feels more like a collection of modes than a fun next step for the series. The simultaneous gameplay left me feeling less invested in the actions of my opponents, minimizing the desire to be strategic, while the minigames were more hit or miss than ever before. Though the Mario Party series has experimented with the formula more and more in recent years, Star Rush feels less like a Mario Party game than any of its predecessors. 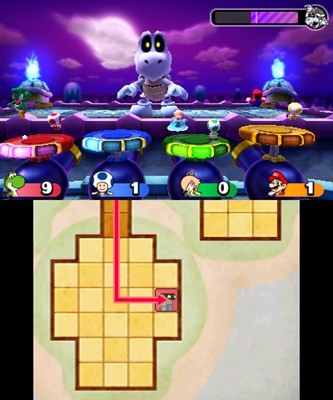 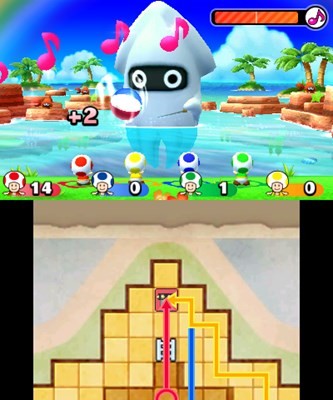 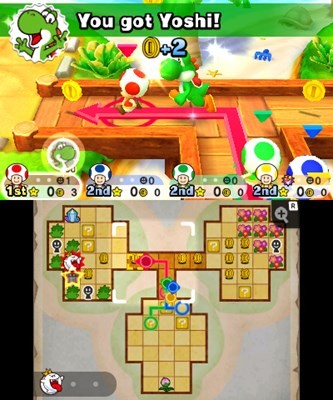 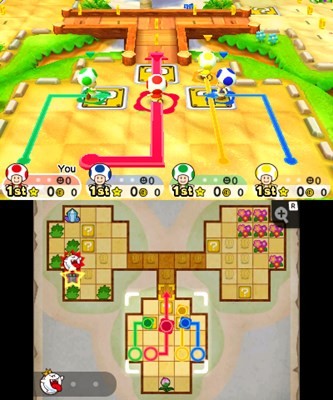 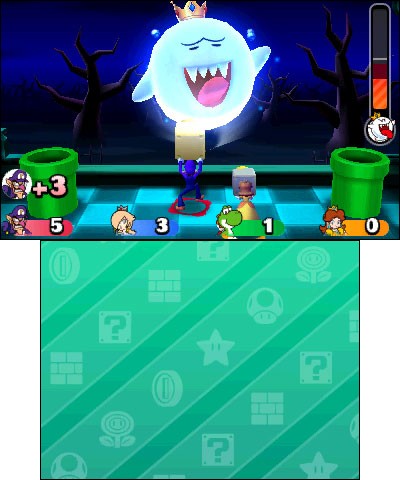 6.5
About Game Informer's review system
Concept
Turn the concept of Mario Party on its head by delivering simultaneous gameplay and non-linear boards
Graphics
The cartoony graphics and bright colors of the franchise are present throughout
Sound
The characters chirp when they’re in action, but the bulk of the sound is music typical of a Mario Party game
Playability
For longtime Mario Party players, the formula takes some getting used to, but once you get a few games under your belt, the redeeming qualities are more apparent
Entertainment
The minigames range from frantic and fun to repetitious and uneventful
Replay
Moderate 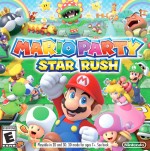