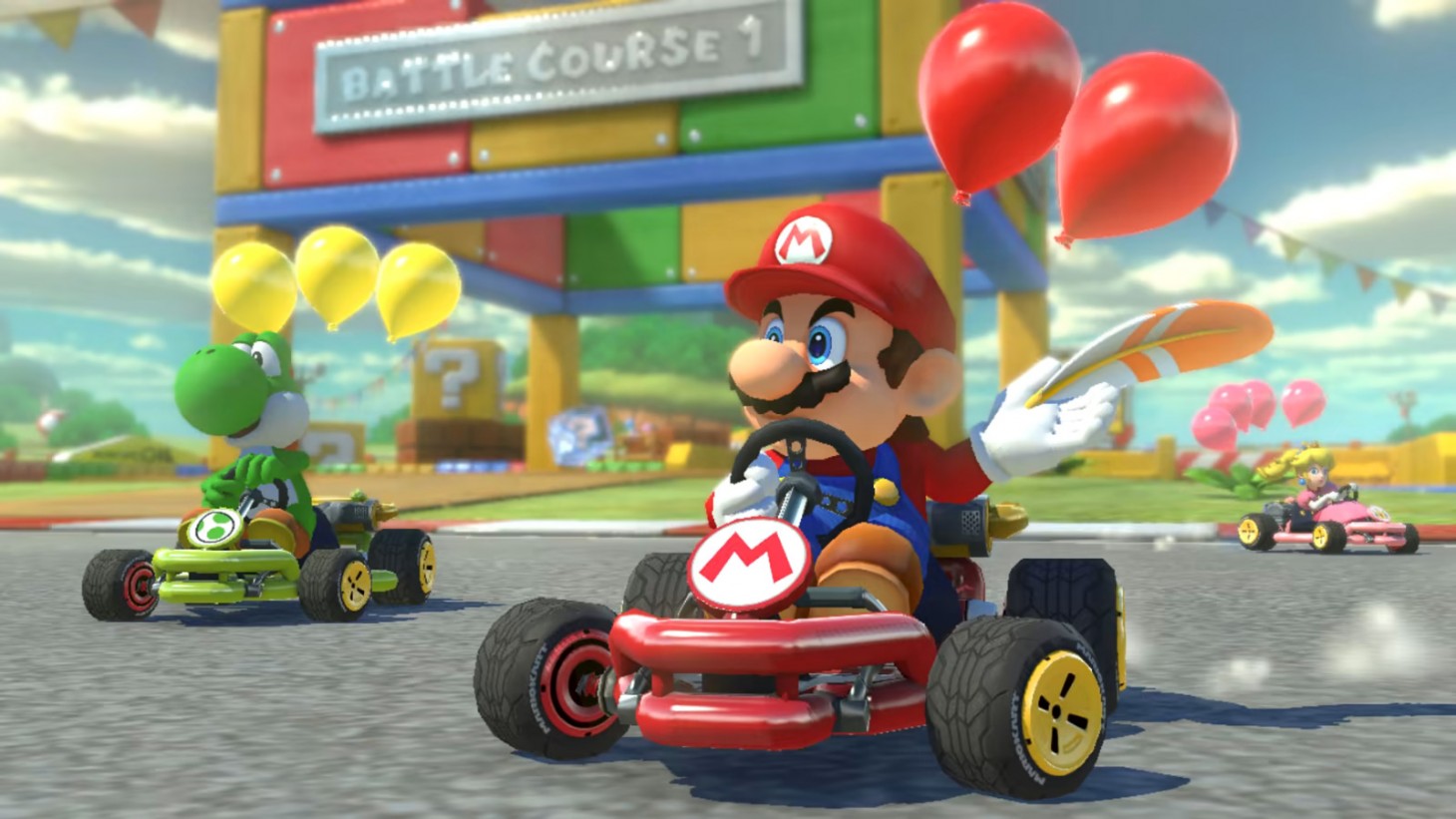 Following Breath of the Wild, Nintendo's nascent system is lacking in exclusives two months into its lifecycle. Mario Kart 8 was a big hit for Wii U when it released in 2014, and now the acclaimed title makes the leap to Switch. While remastered games are rarely the most anticipated releases on any system, Mario Kart 8 Deluxe includes myriad important improvements and adds portability to create the definitive version of an already great game.

At its core, Deluxe is the same great title from Wii U. Racing up a wall is still disorienting fun, and taking the perfect shot with your green shell is satisfying as ever. Even with all the hours I poured into the original Wii U release, I still love the thrill of coming from behind in the final lap to win the race. Of course, some of that is thanks to the questionable rubber-band A.I. that has always been a sticking point of the series, but fans accepted that pitfall as a series mainstay long ago.

In addition to the core game, Mario Kart 8 Deluxe includes all of the downloadable content released for the Wii U version. This means you can tackle the Animal Crossing track as Link on the Master Cycle, or unlock Mercedes-Benz kart components for Dry Bowser and race on the simple-but-awesome Excitebike course. With 48 race tracks, 8 battle arenas, 5 difficulty settings (including mirror and the furious 200cc), and 42 characters to choose from, Mario Kart 8 Deluxe is a behemoth package.

Not all of the content is familiar. All-new characters like the Inklings from Splatoon, Dry Bones, and Bowser Jr. join the pool of playable racers. Players can also hold two items now (like in Double Dash), adding an extra layer of strategy. However, the biggest addition to Mario Kart 8 Deluxe is the complete overhaul of Battle mode.

In the original release of Mario Kart 8, battle mode was the major sore spot, since it made players duke it out on race tracks rather than dedicated battle arenas. With Deluxe, Nintendo has more than remedied that problem. In addition to adding new and reimagined classic battle arenas, Deluxe expands on the basic battle concept. The classic Balloon Battle, where you try and pop the balloons of other players while protecting your own, is joined by the all-new Renegade Roundup, as well as modes from past games like Bob-omb Blast, Coin Runners, and Shine Thief.

Renegade Roundup is a cops-and-robbers mode where one team tries to capture runaways before the time limit. Shine Thief is a free-for-all first where players try to possess a Shine Sprite for a set time while every other player tries to jar it loose and steal it. Coin Runners provides a fun mad-dash for gold coins. The action is fast-paced and surprisingly tense in these modes, but my favorite variant battle mode is Bob-omb Blast, a chaotic take on Balloon Battle where every item is replaced with explosive Bob-ombs. With customizable rulesets and several exciting takes on the mainstay mode, this is the battle mode fans craved.

To round out the new features, Nintendo included a couple of new accessibility options that make it easier for anyone to jump into a race. Options like smart-steer, which helps less experienced players stay on the track, and auto-accelerate, which is helpful for those unable to hold a button down for an extended period of time, combine with the optional motion controls to make this easily the most approachable entry in the franchise.

Adding to the accessibility is what the Switch brings to the table. This is a beautiful game full of vibrant colors, fast-paced action, and gorgeous visuals. Being able to not only play it on the go, but also experience no loss of performance in the process is fantastic. I loved taking it with me as I sat in a waiting room for an appointment, then sliding it back into the dock to continue my Grand Prix run on the big screen.

Multiplayer is a major part of the Mario Kart experience, and Deluxe makes it easier than ever to jump in with friends or matchmaking. I played both online and local multiplayer through wireless with no noticeable latency or framerate drops. Dumping four players onto a single Switch for splitscreen action also keeps the framerate smooth, and it's great to to simply hand off individual Joy-Con controllers and get into a race or battle.

Mario Kart 8 Deluxe is primarily a re-release of an acclaimed game from three years ago, but by adding new content and addressing the biggest complaint of the original, this version is unquestionably the best way to experience Nintendo's great racer. Battle mode is back to its original glory, and when combined with the rest of the robust Mario Kart 8 package, it creates a great addition to the fledgling Switch library. 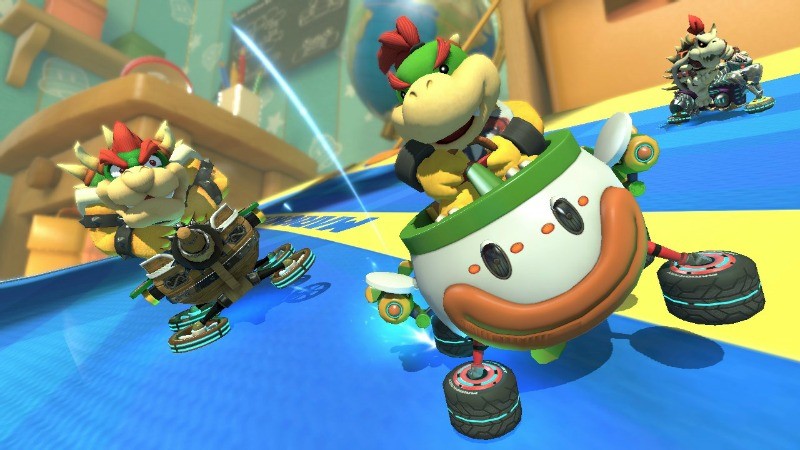 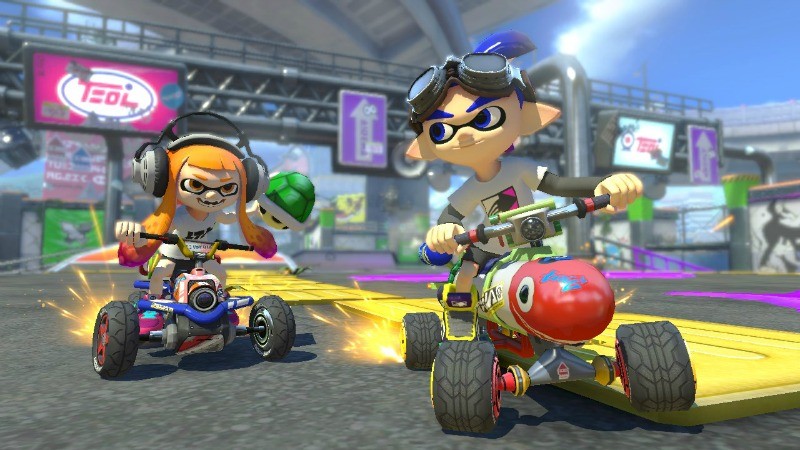 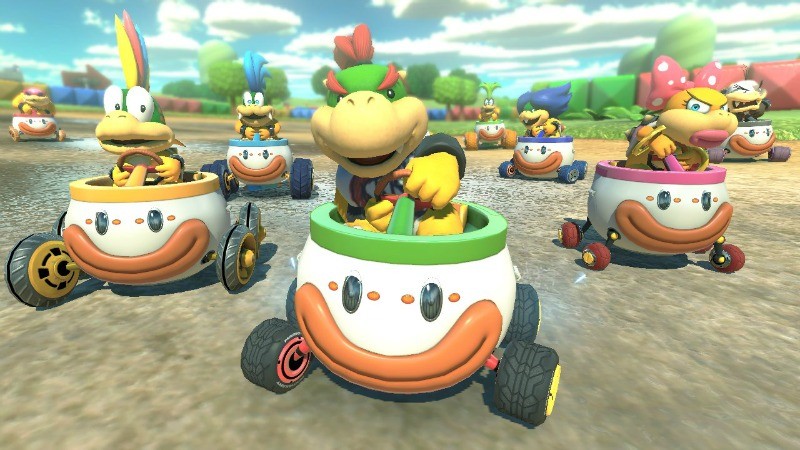 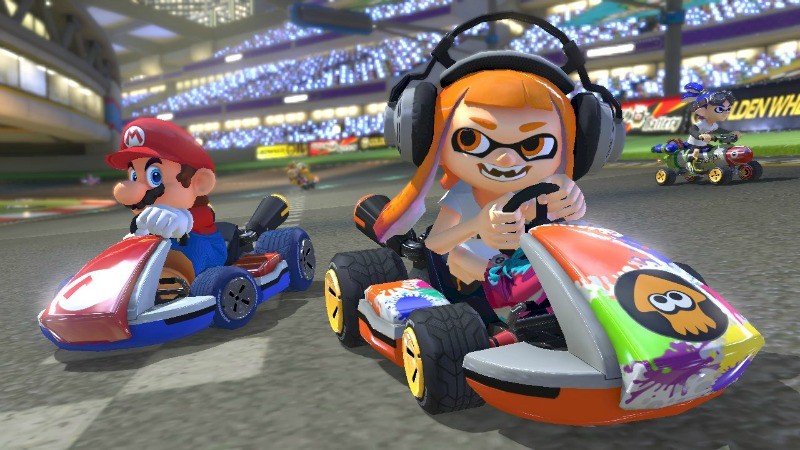 9.25
About Game Informer's review system
Concept
Add new characters, a revamped battle mode, and the new capabilities of the Switch to Mario Kart 8's already great base
Graphics
Whether playing in TV mode or handheld mode, online or local, the fast-paced action is smooth and crisp
Sound
Listening to the catchy soundtrack while you race around the track never gets old
Playability
Controlling Mario and his friends is easier than ever due to new accessibility options like smart steering and auto-accelerate
Entertainment
With multiple new additions and important improvements, Mario Kart 8 Deluxe is the definitive version of one of the Wii U's best games
Replay
High