It’s no secret that Wii U owners have had slim pickings in recent months, but one of Nintendo’s most consistent franchises is back to give you a reason to dust off that GamePad. Mario Kart 8 is filled with the traditional upgrades: new tracks, new weapons, and new characters. Mario and friends can also drive on walls and ceilings now. All of those elements are fantastic, but the overall polish, gorgeous visuals, and entertaining replay system make this a bigger step up than we’re used to in the series.

Upon hitting the track for the first time, there’s no way to ignore the visual leap Mario Kart 8 has made thanks to its HD visuals. The vivid colors and cartoon-like Mushroom Kingdom environments have never looked better, even surpassing the beautiful Super Mario 3D World. I had several co-workers watch the game over my shoulder, and “Wow, this looks great” was the most frequent comment by far.

Once you’re done ogling the visuals, you quickly realize that the game’s polish isn’t purely cosmetic. Courses are finely tuned, with tracks like Mount Wario, Shy Guy Falls, Twisted Mansion, and Cloudtop Cruise in the spotlight as standouts. Mario Kart 8 is also host to the best version of Bowser’s Castle, featuring a gigantic stone version of the villain punching away at the track and causing ripples. Course design even shines in tracks that are over 15 years old; Toad’s Turnpike was one of my least favorite tracks on Mario Kart 64, but its inclusion in Mario Kart 8’s retro cups is fantastic thanks to the ability to drive onto walls and soar above traffic.

Defying the laws of gravity is simple. Many walls feature blue curves that will shift your tires sideways when crossed. Keeping your cart or bike in the hover position isn’t limited in any way, so large portions of some tracks are spent in topsy-turvy conditions that remain somehow coherent. Gravity transitions are never jarring, and they don’t feel overused.

Like Super Mario 3D World, Mario Kart 8 features several controller options. While the GamePad and Wii remote/nunchuk schemes get the job done just fine, I preferred the Wii U’s Pro controller. Regardless of what you choose, the controls are pitch perfect and you can never blame them for your own poor performance. This being Mario Kart, you can blame the barrage of blue shells and lightning strikes for sending you from first to ninth at the last second.

That infamous blue shell isn’t as unstoppable as it has traditionally been. A new boombox item comes in handy when you’re in first and you hear the ominous sounds of the flying projectile approaching. Directly before it strikes, activating the boombox shatters the shell and renders it useless. Another great new item is the piranha plant, which serves a variety of purposes. When active, it chomps away at anything in front of it, including opposing racers, obstacles on the track, and coins. If there’s nothing for it to eat, it snaps at the air and gives you occasional speed bursts. The new boomerang flower allows you several chances of hitting an enemy, as you’re able to throw it up to three times and it has a chance to hit as it goes forward and backward.

Grabbing the gold in every cup should keep you busy for a while, but the franchise’s classic multiplayer is what keeps you coming back. For the first time, up to four players can participate in grand prix competitions. With four human players and eight CPU racers, seeing where you stand in the rankings at the end of each track proves to be a lot of fun. Playing single-player or with one friend runs at a smooth 60 frames per second, but adding more players makes a noticeable difference. It may run a little slower, but no other areas suffer. If you’re looking to take the action online, setting up matches with friends or random players is a straightforward and simple process. The only thing that falls on the disappointing side is battle mode, which eschews the unique arena areas from the past in favor of duking it out on standard courses.

The addition that surprised me the most is the new highlight reel system. At the end of each race, you’re given the option to watch a customizable recap of its events. Replay length, featured characters, and highlighted moments (big hits, drifts, etc.) can all be adjusted, and it’s easy to fast-forward, rewind, and go into slow motion. Watching the characters’ facial expressions slowly change when they’re passed or hit with an item is an unexpected joy of this new entry.

Every Mario Kart title has been at least “good,” but there are some clear standouts. Mario Kart 64 hits the right nostalgic notes for fans of local multiplayer, and Double Dash shined with unique gameplay elements and great courses. Mario Kart 8 should certainly be added to the list of top-tier entries, and none of the previous titles can boast the rock-solid total package that this one offers. Say what you will about Nintendo sticking with the tried and true, but I have no problem with that as long as it stays this fun.

9.25
About Game Informer's review system
Concept
Drive the long-running series forward, sideways, and upside-down
Graphics
The franchise’s HD debut is visually stunning, and the Mushroom Kingdom never looked better
Sound
The audio presentation is on par with the visuals, with great orchestrated tracks that are among the best in the series
Playability
Numerous control options are available, but the Wii U Pro controller is the way to go unless you desperately want to honk a horn with your GamePad
Entertainment
Mario Kart remains pure fun, and it’s never been better
Replay
High 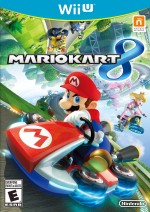