If you’ve played one Mario Kart, you haven’t played them all – but you could go directly from the SNES original to this brand-new 3DS version without missing a beat. The mechanics are almost identical, though the formula benefits from a few decades of balance tweaks and subtle improvements. The hatin’ half of the game-playing population can make as much fun of me as they want, but I can’t help but fall in love all over again with Mario Kart when Nintendo executes the classic gameplay this well.

As always, players are encouraged to find a rally-like rhythm of powerslides through the zaniest courses Nintendo could dream up while dodging gonzo power-ups and environmental hazards. Races naturally stay close as players in worse positions get better items. The occasional total screw job (for example, getting blue shelled, then lightning bolted during a jump right before the end of the race) is frustrating, but skill wins 90 percent of the races. I rarely placed poorly because of random chance rather than driver error – tough though that may be to admit.

Mario Kart is almost exactly how you remember it, but what tweaks have been made are generally positive. Powerslide-boosting (blue sparking, in the vernacular) is now dependent on the degree of the slide instead of d-pad gymnastics, meaning that boosting down straightaways is a thing of the past. Heavy characters no longer steer like drunken camels, so you can play as DK or Bowser without unintentionally activating hard mode. The much-hyped glider and underwater segments are minimal and kind of neat, and it’s cool that they adapted the retro stages to fit MK 7’s gameplay systems. I’m less convinced that the return of coins has much effect on gameplay; I think they make you go faster? If nothing else, I dig having something else to aim for during the race.

The new tracks range from good to excellent. Including races that consist of three unique sections instead of three laps is a wonderful choice that adds much-needed variety﻿. New hazards like airships firing oversized Bullet Bills regularly show up, and alternate paths abound. As much as I adore the Double Dash tracks, this set is the new high water mark for the series. The retro tracks don’t have the same wall-to-wall quality, but I appreciate that they have a few new tricks dropped in as well as glider sections.

First-person mode surprised me. I was prepared to hate on the new perspective and its gyroscopic driving controls, just like I despise Mario Kart Wii’s motion controls, but it works well enough to win 150cc races. I’ll be sticking to the traditional method, but I can honestly recommend this to people who like first-person views or motion control.

Battle Mode is, of course, still stupid and boring. I have never understood why anyone would voluntarily spend any time in this poorly balanced, luck-of-the-draw mode that may as well assign a winner by a random die roll. I guess it’s amusing to nail a well-placed green shell shot, but you can do that and have an otherwise fun experience in a proper race.

Nintendo’s other big push for Mario Kart 7 is in online play. It seems to work as advertised, but I’m hardly inspired by racing against strangers with no persistent leagues or overall ranking structure to validate my progress. The ability to create communities of users with custom rules (no blue shells, for example) is neat, but the functionality is limited enough that I would rather just race with the default rule set. I see MK 7’s online as much more of a distraction than a destination.

Mario Kart 7 isn’t 100 percent golden, nor is it going to make believers out of anyone who wrote off the series years ago. Taken on the whole, though, this is one of the best entries in the series. As a fan, I’m thoroughly pleased. 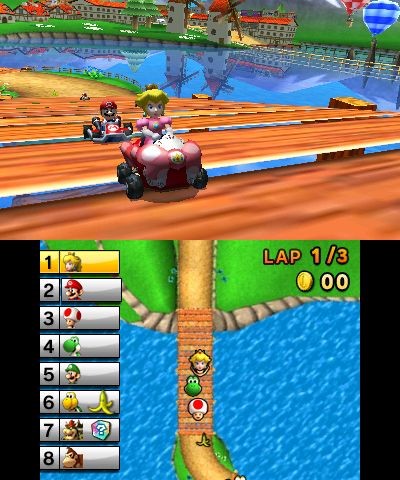 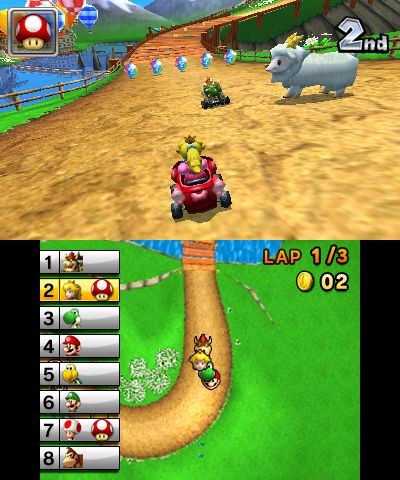 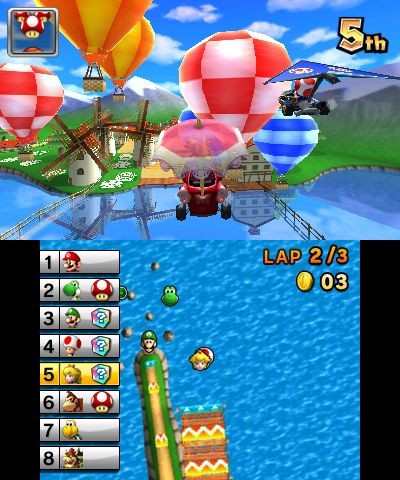 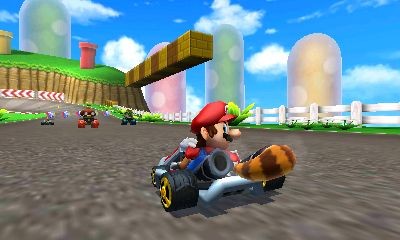 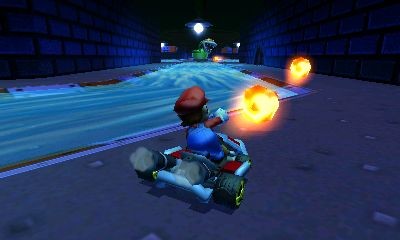 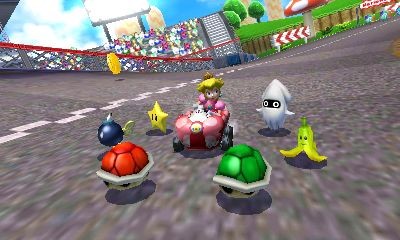 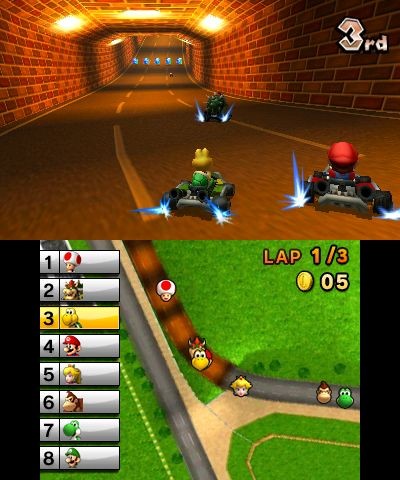 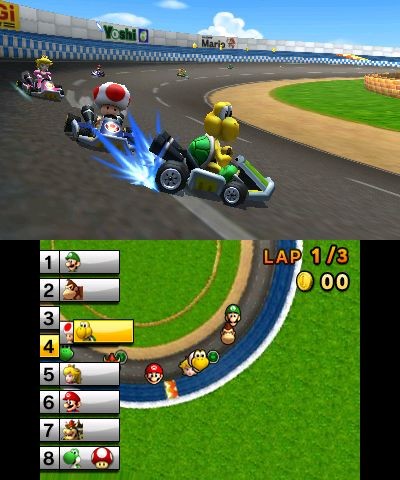 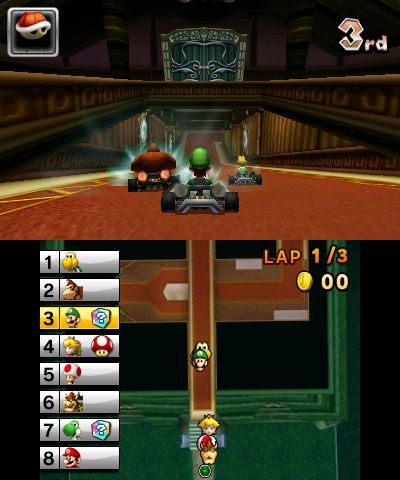 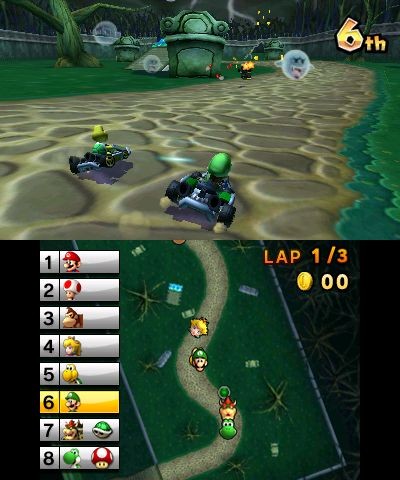 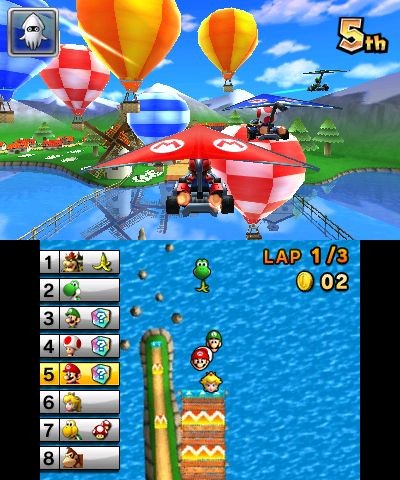 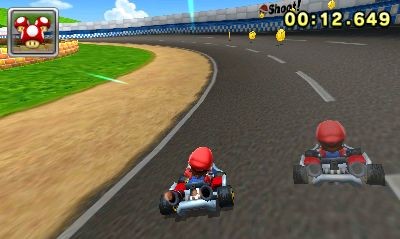 The mechanics are almost identical, though the formula benefits from a few decades of tweaks and improvements.

Purchase More Info
8.5
i
Game Informer's Review System
Concept Mario leads his pack of friends back to the track to prove they still have the knack
Graphics The rock-solid framerate is worth a thousand shaders, and Nintendo is still world-class at building colorful settings
Sound The audio cues for incoming projectiles are convenient. Donkey Kong’s new voice is just awful
Playability Yup, it’s still Mario Kart. The slide-boost mechanic is better balanced this time around, as are the weight classes of racers
Entertainment This is a fantastic portable edition of the franchise, but there’s very little here we haven’t seen before
Replay High