Ubisoft surprised gamers when it announced not only was it working on a Mario title for the Nintendo Switch, but that it would be transporting the mustachioed plumber and friends to the turn-based battlegrounds of the tactical strategy genre. While that may sound like an ill fit for gaming’s biggest kid-friendly mascot, Kingdom Battle succeeds by not only what it cribs from the genre’s leaders, but also by what it adds to the mix.

Kingdom Battle mashes up the Mario and Rabbids universes with the flimsiest of storylines. A material-merging VR headset falls into the hands of the time-traveling rabbids, who waste no time in accidentally transporting themselves to the Mushroom Kingdom, jumbling up the two worlds in the process. The onus falls on Mario to clean up the mess, along with some of his old friends, a few helpful rabbids, and a Roomba-esque robot named Beep-0, which you use to plot your moves during battle.

The madcap adventure plays out across four uniquely themed worlds, each of which offers 15-plus tactical battles against “corrupted” rabbid forces. Kingdom Battle draws no shortage of inspiration from the genre-leading XCOM series, from the navigational aids and overlays that make planning your moves a breeze to some character abilities like Hero Sight, which allows Mario to snipe a moving enemy on their turn (why they didn’t call it Marioverwatch is beyond me).

But Kingdom Battle is more than a kid-friendly XCOM clone. Your squad of heroes is more mobile than in most tactics games, and can perform dash attacks and head stomps while on the move to supplement their weapon attacks. Characters also have their own special abilities (including the aforementioned Hero Sight or enemy-attracting Magnet Dance), giving each of your three characters a trio of maneuvers to perform every turn. As such, each battle plays out like an intriguing optimization puzzle, as you swap back and forth between characters’ movements, weapon attacks, and abilities to set up the best team combos and maximize the damage you inflict on enemies. Additional Mario-themed elements like sewer pipes that transport you around the battlefield and chain chomps that take a bite out of the nearest character offer more wrinkles to the gameplay, and reinforce Kingdom Battle’s unique identity. Kingdom Battle offers strategy fans another attribute that XCOM can’t match: a wacky and light-hearted tone that eschews the genre’s penchant for gut-wrenching decisions, oppressive tones, and squad-wiping permadeath. This opens the door to more experimentation and risk-taking. If one of your characters gets knocked out (say, from having their butt lit on fire), you can restart the battle with no long-term repercussions. There’s plenty to experiment with – each character has a long list of weapons to unlock, as well as skill trees that you can (and will) respec before any battle.

Ubisoft breaks up the endless series of tactical skirmishes with some light exploration and environmental puzzle-solving. While I enjoyed the world themes and silly predicaments you find the rabbids in, the Sokoban-style block-pushing puzzles go from too simple to simply tedious. Collecting a big string of coins and snagging a new weapon or pile of ability orbs (i.e. skill points) from a treasure chest is satisfying, but concept art, music tracks, and 3D models make up the bulk of the underwhelming rewards. While I appreciate the brief respite from combat, Kingdom Battle’s puzzles feel like filler, as does the need to backtrack through the lengthy worlds to complete the unlockable bonus missions. Kingdom Battle’s entertaining and demanding tactical combat more than makes up for the downtime. I found myself frequently switching up my party and trying new character builds, and I relished the added challenge of the numerous boss battles, from the banana-chucking Rabbid Kong to the aria-crooning Phantom. The gradual build-up in difficulty only hits a few minor bumps along the way, culminating in a satisfying final showdown and some post-game ultimate challenges that prove just how fun and flexible the combat system is. A two-player co-op mode rounds out the impressive package, offering up an enjoyable but minor diversion from the main campaign.

I was as skeptical as anyone when I heard the words “Mario” and “XCOM” uttered in the same sentence, but Kingdom Battle didn’t just prove me wrong – it ended up being my favorite Mario game in recent years. Nintendo and Ubisoft took a big risk working together outside their comfort zones, and that risk paid off. 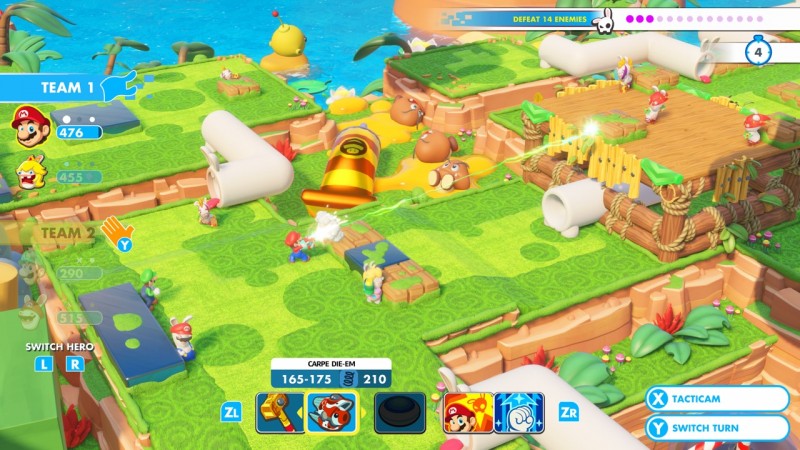 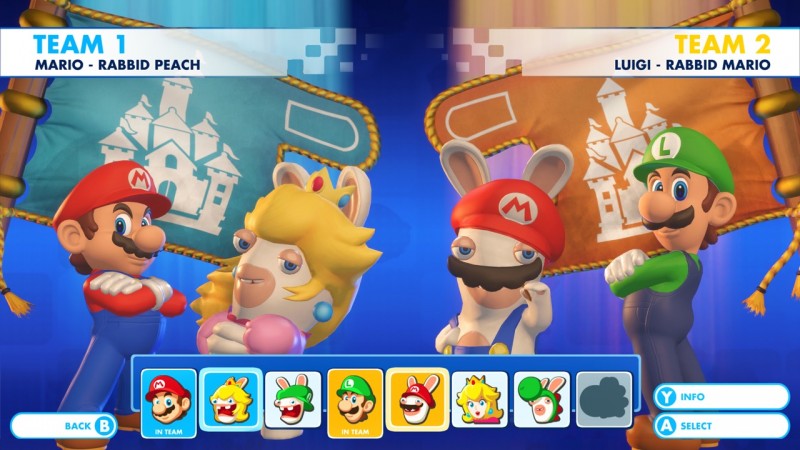 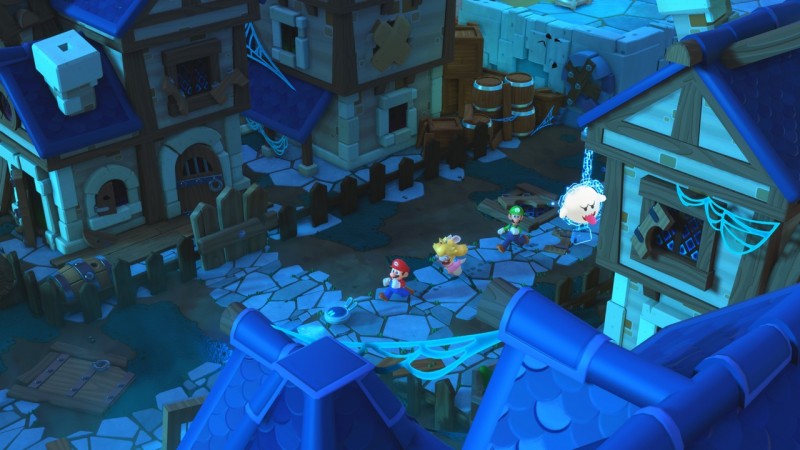 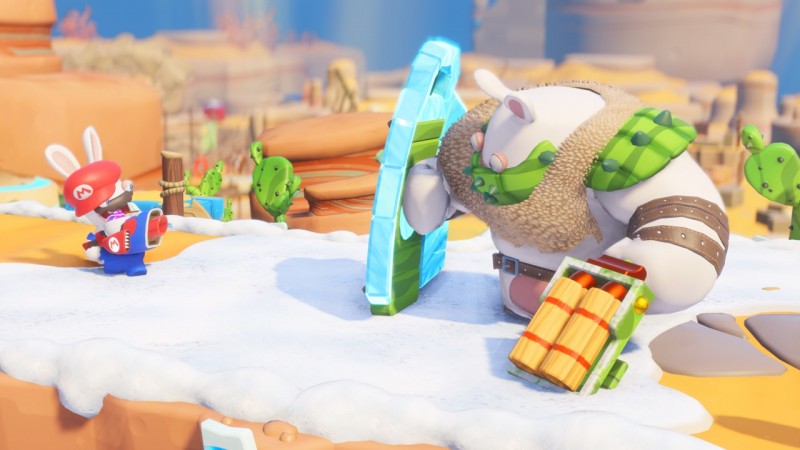 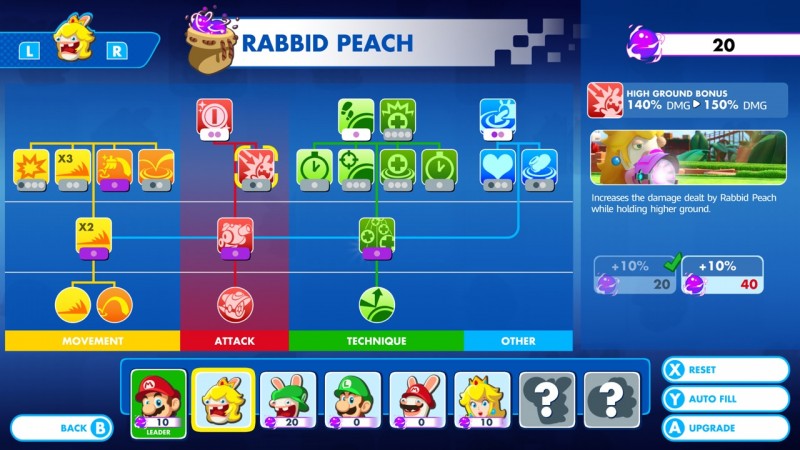 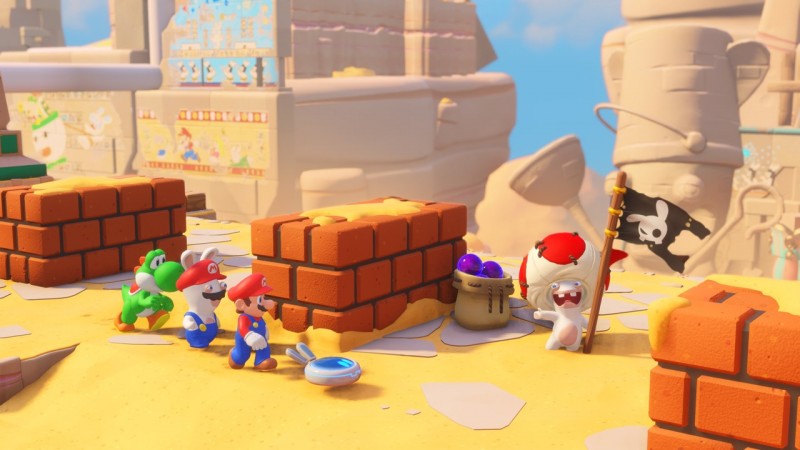 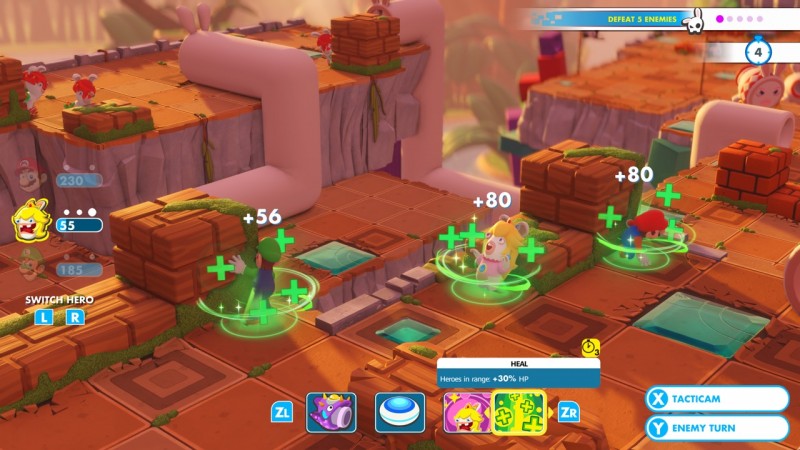 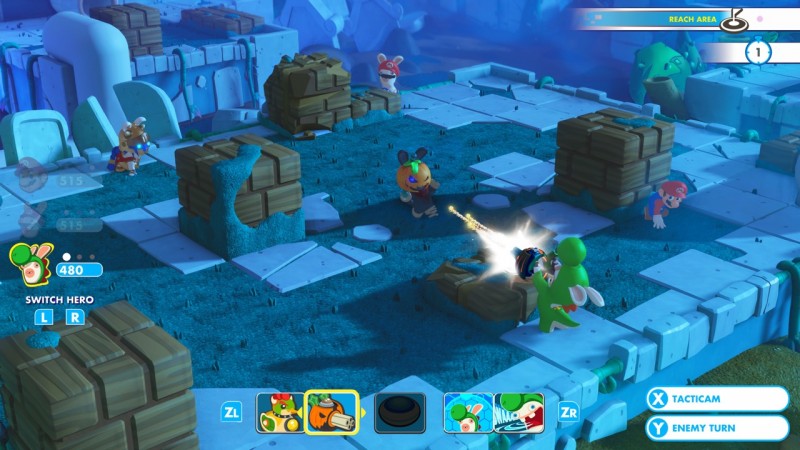 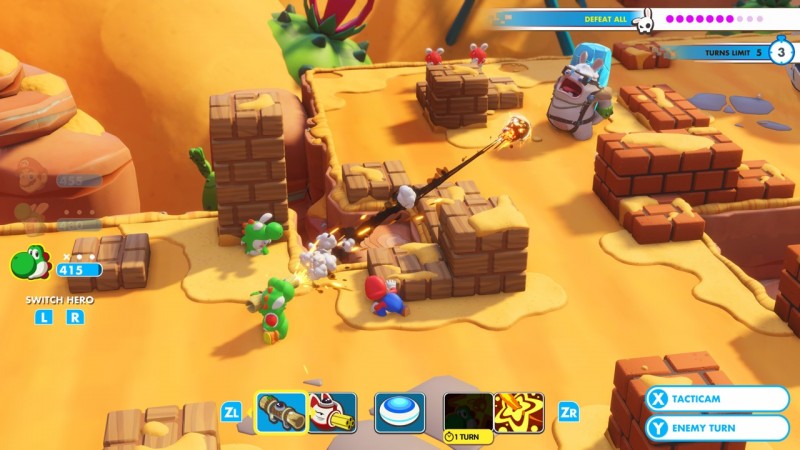 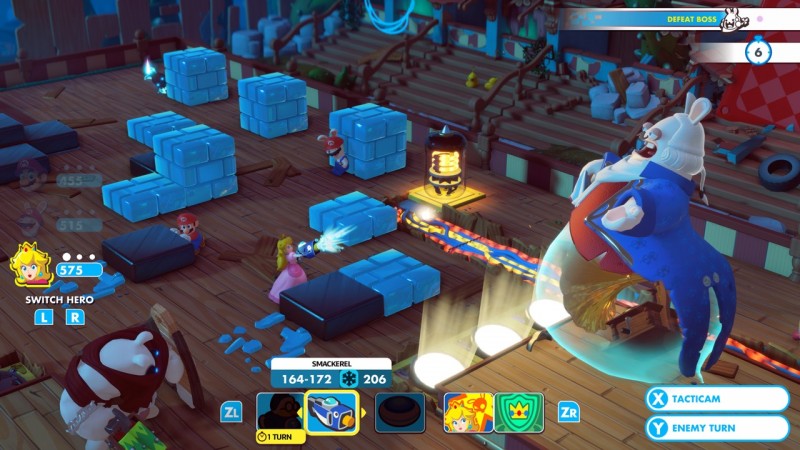 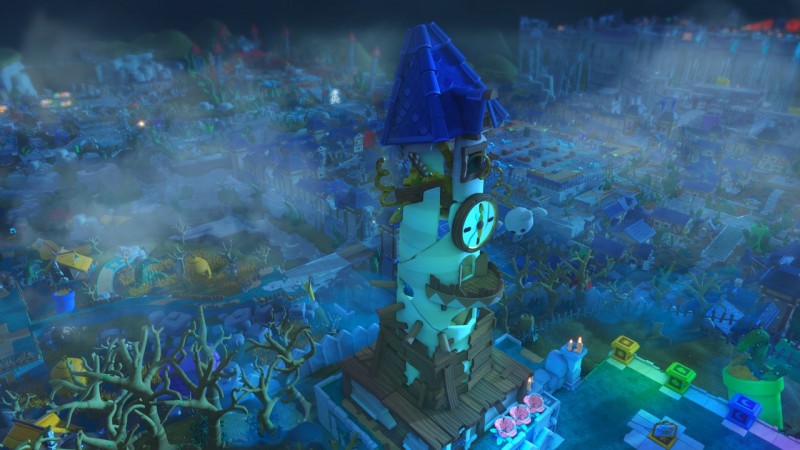 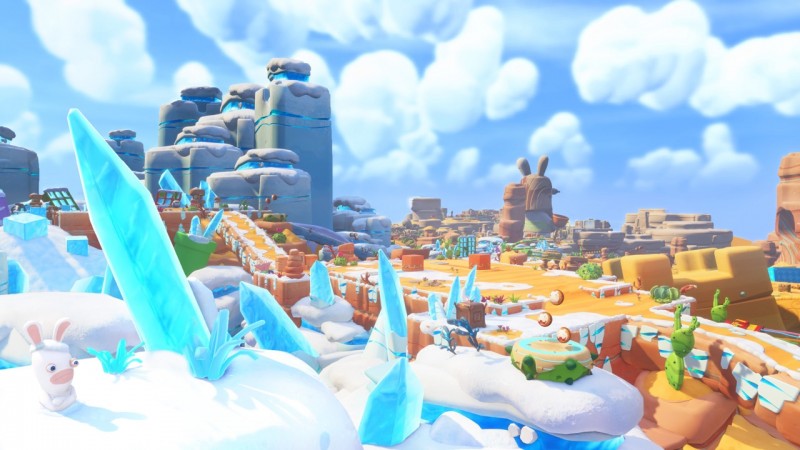 8.5
About Game Informer's review system
Concept
Combine Team Mario with Ubisoft’s own demented Rabbids for a lighthearted but challenging take on the turn-based tactical strategy genre
Graphics
Ubisoft adopts Nintendo’s style of crisp, cartoony visuals while throwing in its own underpants-laden twists to the world design
Sound
The mash-up cast offers up all the grunts and exclamations you’d expect. Grant Kirkhope’s musical score perfectly punctuates the action
Playability
The controls can be finicky during some timed block-pushing puzzles, but mapping out your strategic offense maneuvers works great
Entertainment
While Kingdom Battle’s puzzles won’t win any awards, the robust selection of challenging tactical battles entertains from beginning to end
Replay
Moderate 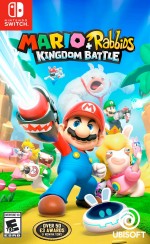