MLB 2K13 is a great simulation of Little League-level baseball. A hard-hit line drive can smack a player in the face. Don’t be surprised if you see a fielder grab a ball and stand there dazed for a few seconds, almost as if he’s waiting for his father to yell “throw it!” from the stands. I even netted an inside-the-park home run because a left fielder didn’t attempt to catch a towering fly ball. It rolled into the corner and the center fielder had to grab it.

All it takes is one glitch to alter the course of a game. An intense pitching duel taken into the ninth inning can transform into a Harlem Globetrotters-like farcical beatdown when one well-struck ball is mishandled because of an AI glitch. Visual Concepts’ MLB series has had its ups and downs, but this year’s game is the lowest point for this series. Bugs like those listed above occur in almost every game. I wouldn’t want to be one of those people striving to win cash prizes in MLB 2K13’s Perfect Game Challenge; pitching nine perfect innings is tough enough already. I don’t want to see the temper tantrum that erupts from someone who had his or her dreams dashed by an unexpected fielding bug.

Visual Concepts didn’t just ship a buggy game with roster updates – it made some noticeable improvements in other areas. Managerial AI is much better this season, intelligently swapping relievers for righty/lefty matchups, and allowing starters to go the appropriate number of innings based on pitch counts and the opposing team’s production at the plate. Ball physics show more weight. This is most apparent in balls that bounce off fences or are bobbled by infielders.

Most of the time, however, the game looks like it’s about to break. Transitional animations are suspect, frequently lagging to load the next animation. On a bunt attempt, a catcher grabbed the ball two feet in front of the plate, yet oddly kept running until he reached the pitcher’s mound before throwing the ball. The base runner was safe at first.

The hitting and pitching mechanics feel like duplicates from last year’s game, which isn’t a bad thing. These mechanics work well and do a respectable job of simulating a realistic game of baseball. Base running is broken beyond belief, however. If you think you're going to get thrown out at second on a steal attempt, retreat back to first. The shortstop or second baseman usually hangs onto the ball, even if they could gun you down by a good 15 feet. Base runners also double as fielder magnets. I witnessed numerous pathing issues where the base runner would pass right through the fielder.

Off of the field, MLB 2K13 is less of a game than it was last year. Online leagues are no longer available, and they haven’t been replaced with a new mode or avenue of play. Franchise mode should probably get the boot as well given how poor the AI-assisted farm system management is. In a simulated season, the AI decided that a no-name minor league first baseman should join the Chicago Cubs, replace Anthony Rizzo, and bat third. He put up a .163 batting average with 12 home runs. Rookie of the Year and Cy Young awards are routinely handed out to players with dreadful “you should be sent down to the minors for extensive work” numbers.

MLB 2K13 is one of the most embarrassing whiffs I’ve seen. Whether I was playing CPU or human opponents, games frequently hinged on something that shouldn’t have happened on the diamond. Only play it if you have a YouTube account dedicated to archiving video game glitches.

I ran into 15 different glitches playing MLB 2K13 in one day. You can watch them here. 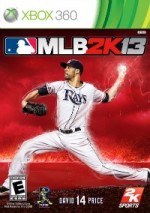 MLB 2K13 is one of the most embarrassing whiffs I’ve seen.

4
i
Game Informer's Review System
Concept After a respectable outing last season, MLB 2K13 forgot how to play baseball. Glitches run rampant
Graphics Keep the camera as far away from the players as possible. These old models aged poorly. Transitional animations lag for far too long
Sound The commentary is once again fantastic
Playability All of the gameplay mechanics are functional and fun. The outcome of plays, not so much
Entertainment A glitch-filled folly of a game
Replay Moderately Low