Major League Baseball 2K11 plays like a blooper reel from This Week in Baseball. Unintentional hilarity is tied to broken player logic, missing transitional animations, magical ball physics, umpire pathing issues, and my favorite: terrified base coaches hitting the dirt for no reason other than to make you think they just died from an aneurysm. Every game plays out like a year in Milton Bradley’s life – you know something horrible is going to happen, you just don’t know when it will be.

The lack of polish affects the visuals and gameplay, and can even cripple an entire season should you choose not to turn off your system after a catastrophic glitch occurs mid-game. I lost my starting catcher (Geovany Soto of the Cubs) to a 15-day wrist injury after he blindly crashed into the backstop chasing a ball that was clearly heading for the upper deck. In the bottom half of the same inning, St. Louis Cardinals slugger Albert Pujols was pulled from the game after diving for a slow foul ball that bounced off of the dugout fence and trickled upfield along the bleacher wall.

In addition to awarding Player of the Game honors, Major League Baseball 2K11 should hand out a post-game Darwin Award for the player who sustained an injury in the most hilarious way. Injuries even baffle the game code. Blake Dewitt twisted his ankle sliding into second base after smacking a two-ball, one-strike fastball into the right field corner. I was prompted to remove him from the game, and brought in Jeff Baker as pinch runner. Baker never made it to second. He was instead placed in the batter’s box with the same 2-1 count.

Managerial AI is equally flawed. Starters are pulled early in games if they give up a couple of runs yet have only thrown 50 pitches by the fifth inning. Closers are asked to hit the showers mid-inning before blowing a save, and pitchers are left in the lineup to knock in the tying run in a ninth-inning nail biter.

Although glitches and an overall lack of understanding how to play the sport reared their ugly heads in most games, Major League Baseball 2K11 does showcase a number of improvements over last year, notably in its batting system. The point of contact is clearly illustrated, and the new post-hit transitional camera, which views the ball from the hitter’s eye line, adds realism to the mix and removes the jarring perspective switch that has been present in almost every baseball game to date. This camera system allows players to gauge if they should turn on the afterburners for extra bases or hold their runners on the base paths. Fly balls drilled toward an outfielder can be hard to read, however, as the fielding animations don’t always correlate with the player’s intent. Again, this problem comes from faulty AI. If a player is jogging nonchalantly toward a ball, you’d think he would catch it. Instead, it bounces three feet to his left and rolls to the wall.

When fielders pursue a ball the way you expect them to, you’ll see a number of new reactions and outcomes. Hard hit balls can now result in bobbles and desperate barehanded scoops and tosses. The animations for these moments are spot on; fielders often look confused after a ball jumps out of their glove, and if they can locate it, hastily scramble to recover it. User-controlled fielding fares better this year thanks to the new ball tracking system, but a circus catch can still occur if your player is mid-stride.

Pitching is a little tougher this year, and cannot be gamed like in years past. If a pitch is overthrown or its spin is off, its trajectory is adjusted accordingly. I threw more balls out of the zone this year, and had to make perfect or near-perfect pitches to paint the corners.

I spent a few days playing games online on the public servers, and didn’t run into too much lag. Most of the games were played without any framerate glitches or slowdown. I noticed a few hiccups in outfielder animations as they tracked down fly balls, but nothing I would consider game breaking outside of an array of bugs and glitches that affect every aspect of play. Once again, no in-game presentation is available. This means you won’t get any stat updates or any indication as to who is stepping into the batter’s box. Although I haven’t dived deeply into online leagues, they seem to offer the same experience as last year’s game.

The same can be said for My Player. Even the small glitches persist like playing a first baseman and being pulled into repeated non-plays on foul grounders hit toward you. Franchise mode hasn’t changed, either. The new player fatigue system is unreliable, broken, and a roster managing nightmare. When Geovany Soto recovered from the injury I noted above, I wasn’t allowed to activate him due to a recurring bug that said that players on rehab stints cannot be inserted into a lineup.

Last year’s game showed promise and a commitment to getting this series back on track. This year’s installment is a disaster. There’s a decent game of baseball to be played here, but you are more likely to pitch a complete game than play through nine innings without a bug or glitch. 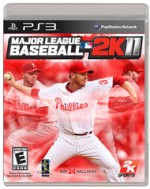 Last year’s game showed promise and a commitment to getting this series back on track. This year’s installment is a disaster.

Purchase More Info
6
i
Game Informer's Review System
Concept Fail to capitalize on last year’s promising foundation by adding more bugs than anything else
Graphics Transitional animations across the board are still a mess, though fielders move better than they have in the past
Sound The commentary team does an outstanding job of contextualizing play and providing a smattering of talk from around the league
Playability The batter/pitcher duel is solid as usual, but MLB 2K11’s gameplay often breaks down outside of that matchup
Entertainment Bugs and rough edges keep this series a distant second behind Sony’s MLB: The Show
Replay Moderate