Cook up a death ray, blow up a swarm of fire-wielding goblins, then quickly prepare a shield and an area-of-effect earth blast to knock down another horde of oncoming aggressors. During the few moments your friend’s errant fireball singes you to a crisp while another ally electrocutes themselves in a panicked retreat. It’s okay, your pals will have you back on your feet in no time, and during the next encounter you can return the favor as everything goes terribly wrong as beams fly everywhere except where they’re supposed to.

Pieces Interactive’s follow up to the original chaotic co-op wizard wunderkind is a worthy sequel if you can handle plenty of spell-fumbling fun as you and your friends push through a fantasy roster of assailants – and each other. The concept is simple: prepare spells on the fly using a variety of elements and unleash them as beams, bursts, sword enchantments, and shields. You have to craft these spells quickly and under assault, and paying attention to your environment is essential. For example, if you are doused with water, you have to knock it off with a flame spell before trying any lightning blasts, or else your results may be… unsatisfactory.

You also have to keep a close eye on all the explosions you are triggering and the areas you are engulfing, as friendly-fire is always on, and often just as dangerous as the foes coming after you. This sort of gameplay feels fun and original for the most part, but make sure your teammates understand that getting fried, zapped, and blown apart often is part of the package.

While Magicka 2 can be experienced solo, I highly recommend playing the game with a few other friends. It’s probably possible to try and tackle things solo, but it will be challenging and require lots of rather uninspired repetitive play involving running and trial and error. Magicka 2 seems to be designed around the assumption that you have at least one other hooded hooligan to share your adventure. It’s also the most fun way to play, as the unfortunate and hilarious mishaps of botched spells under duress make up the bulk of enjoyable water-cooler wizard tales you can share around the cauldron.

Magicka 2’s spell system feels more streamlined than the complex concoctions you could bring to bear in the original game, which is both good and bad. While experienced magi may want some extra options to bring into the battle, beginners will have an easier time acclimating to what can be a challenging system to learn. While it’s a fun little romp, it is a short one – you and a few of your buddies should have no problem knocking it out in a few gameplay sessions, assuming you’re actually trying to win and not just blowing each other up (not that there’s anything wrong with that!). That said, there are some other challenges, unlocks, and other content to explore if you’re still hungry for magic after the main adventure is complete. These offerings are more of the same, but a nice option if that’s what you are looking for.

Magicka 2 delivers more of the magi-mayhem that the series has become known for, but doesn’t really take things in any new or particularly interesting directions. If you enjoyed the first game you will probably enjoy this new journey. If it’s your first outing, it’s a unique gameplay experience, but the mechanics and playstyle are not universally enchanting.

7.25
About Game Informer's review system
Concept
Mix and match the elements to create spells, then unleash them on your foes – and your friends
Graphics
Cute and cartoony visuals are nothing spectacular
Sound
Lots of explosions and garbled gibberish lend to the consistent nonsensical humor
Playability
Slightly easier to learn compared to the original. Highly recommended to play with friends, since the game is tuned for cooperative play
Entertainment
A smattering of levels and other interesting challenges provide the framework for a fun (if fleeting) multiplayer experience
Replay
Moderate 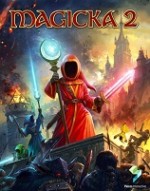