The Duels of the Planeswalkers series has seen many annual releases as the years have gone by – fun, single-serving Magic: The Gathering digital games that allow players to experiment with interesting subsets of cards from the classic card game. Over the years we’ve seen more freedom, more cards, and improvements – like getting to select your own land cards and full deck-building options. With Magic Duels, we keep all the best parts of the series, but the annual releases are no more.

Here’s the most important change with this iteration of the popular annual franchise: It’s a permanent, continually updated client now. Players keep their collections, the format is free-to-play (not a once-a-year purchase), and new card rollouts will eventually sync up with physical releases of new cards and sets. It’s a big deal for the franchise and the series, even if things aren’t quite exactly as they are on the tabletop. Magic Duels is now the definitive, intuitive way to learn to play Magic: The Gathering, better than any friend willing to teach you or starter deck with a lengthy list of instructions and rules. The Duels series is embracing its direction as a new game format for Magic. It follows the same rules as paper Magic, but because of unique rarity restrictions on cards in decks, it creates its own metagame and deck types. While purists may scoff at this unique environment, it offers an interesting new playing field that’s cool to dip into for veterans and definitely more friendly to those still learning. Players are given an impressive selection of cards to begin their rise to power and collect gold for winning battles in the campaign, against computer opponents, and online.

Gold is the in-game currency, and an important influx of it is tied to completing daily quests and large-scale community oriented tasks, encouraging players to try new decks or make goofy specialty decks that might fall outside their traditional wheelhouse. Gold is used to purchase packs, and all cards are obtainable for free, assuming you’re willing to put the time in. Alternatively, you can shell out some real money for gold to bolster your collection. Each card has a collection cap, so you won’t have to worry about acquiring a virtual shoebox of useless extras. The system is similar to other current digital card games, and it’s a great addition to this online Magic: The Gathering title. On release, players explore the first available Magic Duels content through both cards and a campaign that takes players through the origin stories of five of Magic’s most iconic characters. It’s a cool way to handle a single-player campaign that has players advance their decks as these legends advance their own lives, leading up to their transition to powerful planeswalkers. The game features campaign, solo-battle, multiplayer battle and leaderboards, and 2-Headed Giant play (2v2).

Magic Duels is the best implementation of the Duels of the Planeswalkers series yet, with great deckbuilding options that can pull together themed decks in mere moments and cool incentives to experiment outside your comfort zone. If you’re a new player looking to learn Magic: The Gathering, Magic Duels is the best place to start. If you’re a seasoned veteran, the way the game uses rarity restrictions to create a unique environment make it an attractive alternative for some duels.

This review pertains to the PC version of Magic Duels, coming to Steam on July 29. Magic Duels is also available on iOS and is coming to Xbox One and PS4. 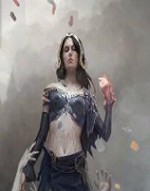 Magic Duels is the best implementation of the Duels of the Planeswalkers series yet.

Purchase More Info
8.75
i
Game Informer's Review System
Concept Transform the annual Duels of the Planeswalker series into a continually updated, free-to-play experience
Graphics One of the best looking digital card game tables out there
Sound Plenty of narrated story brings the campaign to life. In-game sound effects are passable but nothing special
Playability This is the best new-player experience available for Magic: The Gathering. New players learn through an intuitive UI and a series of tutorial quests
Entertainment All the great things about the Duels series with a new format that lets players keep their collections and build on them. Great options for both solo battlers that just want to experiment to serious online combatants
Replay High