Magic 2015: Duels of the Planeswalkers Review Even with many online card games entering the digital market, Magic: The Gathering still earns its place among the best. Magic 2015 Duels of the Planeswalkers takes the classic tabletop card game and packages it so it’s easy to learn and play. Though it is an annual series, this year’s installment finally makes a change that players have been begging for: the ability to build their own decks. New players can use an automated deck builder to make sure things come together nicely without moving into advanced customization, and a solid variety of starter decks to suit any playstyle are available right out the gate.

Players unlock packs and cards as they move through the planes and encounters. In addition, the title allows players to unlock collections and packs of cards at various price points. This progression loop is fun and effective for moving through the campaign and getting together a collection for online play, but players looking for specific cards to “complete” the perfect deck for online duels may feel obligated to purchase some digital boosters. If you’re on the iPad version, you can play through the tutorial and Innistrad for free before making a purchase to unlock the full game. I started with the black/red starter deck, which focuses on stealing opposing creatures and then sacrificing them. After a few matches I had some spiffy new cards to consider adding to my deck, including Magic 2015’s new Indulgent Tormentor. There’s a good variety of cards to be had from Magic 2015 and some of the most popular recent sets – including favorites from Theros, Ravnica, Innistrad, and Zendikar. Difficulty can be adjusted based on player preferences, so newcomers can jump right in against mild opponents and receive plenty of tips as they play cards. As with previous iterations of the series, the UI and gameplay feel excellent and intuitive.

While previous versions of Duels of the Planeswalkers often included an additional game mode – like sealed deck play or Planechase – deck customization is the only real extra here. It’s a huge jump for the series and a fantastic addition to the game, but having another one of the signature game modes would have been nice. As it stands, players are restricted to traditional campaign crawling, extra NPC duels, and standard multiplayer modes.

Magic 2015 – Duels of the Planeswalkers is possibly the best of the series, and an excellent option for gamers that might be interested in learning how to play Magic: The Gathering. Deckbuilding mode gives seasoned veterans an option to dive into the complexity immediately, and new players can become more comfortable exploring the customization that makes Magic great.

8.75
About Game Informer's review system
Concept
Travel through the planes while building up a deck and collecting cards
Graphics
Slick and stylized UI brings the card game to life on digital platforms
Sound
Nothing special here, but sounds are appropriate for alerting players to game actions
Playability
As with the rest of the series, if you are looking for an entry into the world of Magic: The Gathering, Duels of the Planeswalkers is the best way to learn
Entertainment
Deck customization has been something players have been asking for with this series, and it’s a wonderful inclusion here, with the card pool borrowing from some of Magic’s recent sets.
Replay
High 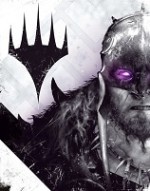 Magic 2015: Duels of the Planeswalkers