Bloody, Creative Combat Brings Mature Entertainment to the Wii
by Andrew Reiner on Sep 22, 2009 at 01:59 PM An Olympic-sized pool cannot contain the amount of blood spilled in MadWorld, a game that earns the right to be called the most violent ever made. It throws gratuitous violence into a meat grinder, telling players that murder with a chainsaw is fine and dandy for an amateur to become a talented executioner, you'll have to lash out creatively, prolonging your victim's death through multiple phases of pain.

MadWorld runs the gamut in violence, taking an encyclopedic approach to its variety in kills. Some of the bloodletting will make you squirm uncomfortably. Do we really need to learn how many times a person can be impaled on the same spike before drawing a last breath? Can a chainsaw cut through bone that quickly? While these moments recall memories of Manhunt, other deaths fall more into the Itchy & Scratchy universe of absurdity. Place a victim on a catapult, and they'll launch to the moon. Why play golf with tiny white balls, when you can use a human skull instead? This variety in tone leads to a grandly sinister experience that keeps you guessing what's coming next.

In many ways, MadWorld can be viewed as a spiritual successor to Midway's classic arcade game, Smash TV. Your avatar, Jack, is a contestant in a game show that is televised across the world. The game is simple: kill for the right to live longer. Jack enters the game at the lowly rank of 256. His mission is to kill his way up to the top seed.

Climbing the ranks isn't as simple as killing everyone you see. To earn the right to challenge a ranked opponent, Jack must first earn points by mowing down human fodder. Sure, a chainsaw strike can make a hell of a mess, but it doesn't offer much when it comes to points. Like many games, MadWorld embraces the concept of combos, only in a much more sadistic way. Before you toss someone into a burning trash can or kick them into a jet's afterburners, why not give them a little bling bling like a trumpet jammed into their skull?

If you play this game the way you should by slaughtering victims in the most foul of ways it ends up being a non-stop highlight reel. The ranked boss battles are especially entertaining think Mortal Kombat Fatalities with the budget of a Star Wars movie. All of the accelerometer-based shaking and slashing works without a hitch, but the enemy lock-on system is an uncooperative mess, and the grab mechanic, which is used for almost every action, is unreliable, often making the simple action of picking up a club seem like you are attempting it blindfolded with oven mitts on.

If you have a stomach for gore and extreme violence, MadWorld is video game popcorn. It pops and sizzles in ways you wouldn't expect, and ends up being a unique treat.

9
About Game Informer's review system
Concept
Everyone must bleed. This game turns the most gut-wrenching kills into ?modest routines
Graphics
A black and white comic book soaked in blood red
Sound
The announcers add hilarious color to each massacre. Beneath their rambling, the game offers a long-winded but original hip-hop score
Playability
The camera coupled with a wayward grasp mechanic makes for some frustrating moments, but the top-notch motion-based functionality is the driving force behind this bloody show
Entertainment
Roughly six to seven hours of manic mayhem, plus the ability to replay Blood Bath challenges with a friend
Replay
Moderately High 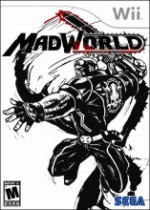