The year-after-year sports game structure should be additive, with success achieved by building on previous efforts. Madden, however, seems to be in a cycle – and this year it’s on a downturn. Not since the beginning of this console generation has the series been so out of sync. Like a desperate team that has stocked up on high-profile free agents thinking it’s on the cusp of a championship, Madden NFL 12 looks good in practice, but where it counts it’s a jumbled mess of frustration, unmet expectations, and sloppy play.

Madden NFL 12 doesn’t fully execute on its ideas. The series neglected the franchise mode last year, and although developer EA Tiburon made big changes, this mode will have to be reworked again in order for it to be fun. The goal of the new scouting system is to build info on players through multiple regular season and off-season scouting stages. You have to pinpoint your priorities and accept that you’ll know more about some players than others by draft day. I love this concept, but you can’t find out enough info on players even if you scout them multiple times. Worse yet, you don’t even have the combine numbers for the players you don’t scout. You can’t tell me an NFL scouting staff wouldn’t know a player’s 40 time or other basics about even obscure players. As a fan I can get that stuff just by watching the NFL Network. Ultimately, on draft day you have to resort to taking shots in the dark or reaching for players; the best-player-available strategy is impossible to implement.

The other linchpin of franchise mode, free agency, also has good intentions but is unfulfilling. The new timer-based bidding system is cool, but it could help you out with more menu tools, and the period still has no restricted free agency or flexible contract options for players on your roster you resign before they enter free agency. Your roster is larger, but it still doesn’t contain a practice squad and the CPU automatically signs undrafted free agents for you.

The franchise mode isn’t the only area in need of reworking. Adding more options to last year’s GameFlow playcalling system has made what was once a simple feature confusing. Why do plays disappear in the GameFlow menu when I cycle through them, and why can’t I see the formations these plays are run from? Superstar mode’s new experience system gives you points for activities you didn’t do (tackling points for a QB?) and doesn’t have nearly enough depth to make you feel like a superstar. The presentation, with its cool NFL Films-like shaky cams, can’t correctly name the Gatorade Impact Player of the Game. I once saw it call out a QB with a rating of 13.9! Finally, more legacy gameplay problems must be cleared up. Linebackers still jump obnoxiously high to block passes on the higher difficulties, players can be unaware of the ball, secondaries drop many gimme INTs, WRs lack any aggression going after the ball, true gang tackles are missing, and punt and kickoff blocking is still horrible.

It’s disappointing that many of the new features fail to bring value to the table, but elements like last year’s excellent motion system are at least in place to make the game exciting from moment to moment. Although I wasn’t in awe of the new player hot/cold streaks, I liked the player roles and how they changed from year to year and gave your players a career progression arc. Other bright spots are the online communities that help weed out the riff-raff from your online multiplayer (thanks to stronger griefing rules), and the accompanying leaderboards also offer a larger structure to the experience. This is especially useful since the online franchise feature is still a bust.

Past Maddens either delivered new features or fixed old problems, but this year you get neither. In too many instances Madden 12 takes you down promising paths that only lead to dead ends. Commenting on the obvious disappointments that crop up in the experience, Bertz once asked me incredulously, “Didn’t they play their own game?” I can’t remember a time when the series was this lost. I’d say that it has nowhere to go but up, but as this year shows, progress can be elusive and nothing can be counted as certain.

7.5
About Game Informer's review system
Concept
Piecemeal additions to many of the game modes don't add up to any significant progress. If anything, the franchise has taken a step back
Graphics
Players' uniform details look nice and crisp. It's cool that you can often see chunks of grass and turf fly up
Sound
The commentary is often behind the action, and it's the conspicuous weak link in a presentation package that has many improvements
Playability
o
Entertainment
Despite a number of promising features, Madden fails to deliver a compelling experience
Replay
Moderately High 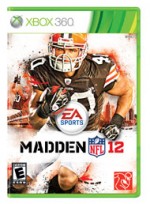