Football fans often debate about the relative importance of the positions on a team. Can a great QB make the receivers around him better? Can marquee receivers make a mediocre QB look good? Does an ineffective pass rush doom even the most skilled corners? Madden NFL 11 spurs a similar kind of discussion based on the features it has chosen to address for this latest iteration versus those that have remained unchanged. Does the inclusion of online co-op play trump a bare-bones online franchise mode? Is making a stud running back like Chris Johnson feel like a world-beater more important than not cleaning up past AI issues? The answers to these kinds of questions are up to you as a Madden player. I like a lot of the new additions to this year’s game, but the lack of progress in some areas is unfortunate.

Madden NFL 11 features a new motion engine that makes running with the ball a dream. Subtle cuts, bursts of speed (without the turbo button), sheer physical power, and other characteristics are layered on and make NFL players come alive and showcase the abilities that make some of them stand out from the crowd. The game makes you feel like you’ve got unprecedented control over the runner, and every run feels a little different – particularly in the tackles or the lack thereof. Because of all the different factors that go into a player’s running and tackling, you’ve got to watch that your defenders wrap up the ball carrier, otherwise it’s common for a guy to get loose after a couple of sloppy tackles.

I love the varied outcomes in tackling and animations, but inconsistency elsewhere in the gameplay is maddening (no pun intended). Running with the ball is one of the highlights of the game, but the passing game shows some flaws. Players can be shockingly unaware of the ball as it sails by within their grasp. You also see players standing around without a clue of who to block or tackle. This is conspicuous when such great work has been done to highlight receivers’ tracking of the ball for sideline catches and grabs in the back of the endzone. For every cool catch you see, you’ll also see the ball suction into a receiver’s hands or vice versa (where it looks like a player shoots forward suddenly to catch a ball otherwise out of their reach), as well as old staples like dropped gimme interceptions and auto-INTs.

Will it be the T.O. Show in Cinncy?

Similar to last year, not every area of the game has been improved. What we gain in the new locomotion the game loses in yet another stalled year for Franchise mode. The worst part is that some of the mistakes remain, like the broken logic behind staff contracts. Online Team Play (OTP), the new three-vs.-three co-op feature that lets each of your team members control a specific unit like linebackers or wide receivers, is fun, but the fact that this new feature lacks any overall structure like persistent teams means that the games you play in this mode are more or less one-offs. OTP doesn’t fill the void of the gimped Online Franchise mode, which still lacks free agency. Finally, I love the concept of the card-based Ultimate Team mode, even if your starting team is so bad – and no, I don’t feel I should have to spend real money to get good card packs.

I enjoy a lot of the new features in Madden NFL 11. Things like game planning in conjunction with the automated GameFlow play-calling feature (which works a lot better for offense than defense) have changed the way that I play the game. I don’t want to sound greedy or ungrateful, but I feel like adding new features isn’t the only job of the development team when there are other areas that need to be addressed. Madden NFL 11 is a clear step forward for the franchise, but as fun as the additions are, the fact that some of its glaring mistakes remain is like getting a new stud quarterback even though the offensive line still needs an upgrade. You’re going to score, but you’re still a team with weaknesses. 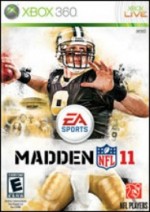 Read all about what Madden NFL 11 gets right and what it gets wrong this year.

Purchase More Info
8.75
i
Game Informer's Review System
Concept Madden NFL 11 takes some great strides forward at the expense of other areas
Graphics The players look sharp, with great lighting work, helmet reflections, and personal equipment touches
Sound New play-by-play announcer Gus Johnson brings emotion, but it’s often behind the action and can be disjointed. The licensed stadium songs/chants are cool, however
Playability Running with the ball (without turbo) feels great and Gameflow improves offensive playcalling, but you’ll spot plenty of legacy issues in the gameplay
Entertainment Controlling the ball carrier never felt this good. This year’s Madden isn’t perfect, but it has its improvements
Replay Moderately High