I have no trouble telling you that this is the best Madden in this generation of consoles. It’s not the most feature-rich title in the series, and not all of its previous problems have been fixed. But the game makes up for its deficiencies by offering a gameplay balance that delivers  NFL-caliber football moments without sacrificing how the game plays or feels. Add in the debut of online franchises, and the development team’s energy has gone in the right directions.

Madden 10’s inclusion of online franchises is long overdue, and it mostly performs up to expectations. True free agency is missing, and the CPU drafting leaves a skewed player pool to pick from, but real-time drafting is a blast. Just don’t let the timer run down on your pick, because you ain’t getting it back. This mode needs improvements, no doubt about it, but it’s a workable first step. As for the other new online feature: online co-op, don’t get too excited. The camera is in tight like in Superstar mode, and only the player who is the online host can call plays.

Online franchises may be the big feature, but the gameplay has not been neglected. Sure, there still is some suction. You’ll see it along sidelines and in some catches and tackles. At the same time, this Madden – without some of the more obnoxious hit stick moments – makes me feel more in control than in recent titles, whether that’s throwing the ball as a QB with a defender draped on me, better handoff transitions, navigating traffic on a kick return, or the subtler juke moves.

A real standout is the game’s gang tackles, which allow some control in moving the pile, but at the same time is not too powerful. I’m a big fan of the optional minigame to recover fumbles, as well as the controller rumble alerting QBs in the pocket and the effectiveness of cornerbacks’ tight coverage – complete with hand fighting. I don’t think the game hits on all the gameplay improvements that the developer touted in its pre-release blogs, but it feels good to be playing Madden again.

The time spent on the gameplay is not without its sacrifices, but if the dev team had to forfeit the player training feature to devote more time to give gamers presentation that is the best in the franchise and close to the revered NFL 2K5, then I’m glad. I’d rather see the referees discussing potential TDs, post-whistle pileups, injury carts, first-down ­measurements, and coach meltdowns, thank you very much. I’m still looking for the whole enchilada of a rich feature set and perfect gameplay, but I don’t think anyone wants Jostens rings just to say that they’re in there. At this point, the series might as well drop the Superstar mode if it’s going to continue to be as bare bones as it is in favor of time spent elsewhere.

That being said, it is absolutely necessary for the Franchise mode to be improved if this series is ever to take a bigger step forward. Practice squads, RFAs, and two free agency periods are just the start. Madden 10’s salary negotiations still offer no flexibility, the coach contracts are broken, the draft scouting info is boring, and this game doesn’t come close in this department to the advancements of EA Tiburon’s own Head Coach 09. The only things I like of the offseason options are the new player potential ratings and revamped player ratings and progressions. I expect much more progress for Franchise mode in the future.

It may only be August, but with Madden this good, football is back. Finally. 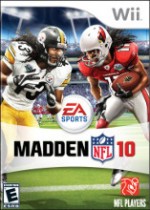 Madden NFL 10
Purchase More Info
8.75
i
Game Informer's Review System
Concept EA Tiburon produces its most playable and exciting version of Madden in years
Graphics The animations are impressive and plentiful, but at times there are jerky transitions between them
Sound Player sounds from the field are just one part of a greatly improved ­presentation ­package
Playability The new optional fumble minigame is a lot of fun. And fair – or as fair as it can get when someone’s gouging you in the eye to get the ball at the bottom of a pile
Entertainment Between the presentation, on-the-field gameplay, and online franchises, this is easily the best Madden of ­this ­generation
Replay High