World War II was the golden age for aerial warfare. Fighter jets, aircraft carriers, and anti-aircraft guns evolved rapidly, and victory in the sky became as crucial as conquering land and sea. Flying aces emerged from their respective nations, single-handedly gunning down hundreds of enemy planes. Luftrausers is a frantic, sepia-toned 2D shooter by developer Vlambeer (the studio behind the mobile hit Ridiculous Fishing). It places you in the cockpit and makes you feel like one of history’s soaring champions.

Flying your speedy, maneuverable jet feels like Asteroids with gravity. Simply managing to stay out of the water is a challenge at first, but you are dive-bombing battleships and dogfighting enemy planes soon enough. Becoming an expert takes time, especially while evading the dense tapestry of gunfire woven by enemy air and sea units. Your health only regenerates when you lay off the fire button, creating an exciting risk/reward factor when deciding whether to finish off a foe or flee. Degrading health is cleverly indicated by a subtle circle that constricts around your ship – the smaller it is the closer you are to going down in a blaze of glory. Bullet hell becomes even more hellish when fighting against the laws of gravity, but constantly compensating for the Earth’s pull makes flight feel satisfying and genuine.

Players rack up points and level up by chaining together kills and taking down high-profile opposition. Completing challenges (like “kill X boats without dying” and “kill X enemies while falling”) also aids progression. Leveling up unlocks new weapon, armor, and engine parts for your customizable craft. Vlambeer has taken fun creative liberties with these outlandish technological upgrades. Combine a beefy engine and heavy armor for a fast bruiser with a slow turn radius. Apply a laser beam and hover engine to become a floating UFO of death. Each aircraft piece comes with its own set of challenges, and they combine to form over 125 combinations. Tinkering with builds and finding what best fits your playstyle is a big part of the fun. Unfortunately, a large selection of these creations end up being duds.

Designing an aircraft that suits your playstyle is important not only for earning points, but also taking down the huge, weaponized dirigible that descends from the clouds. Last long enough in a round and the big blimp will rain down heavy fire into the already chaotic skies. Deflating this intimidating, screen-filling menace seems impossible at first, but persistence pays off. Causing the huge airship go down in flames not only nets pilots a huge score bonus, but instills a potent “I can’t believe I finally pulled it off” sense of satisfaction. The fallen zeppelin comes with a brief cutscene of a WWII-era world leader lookalike meeting his untimely end.

This assassination accentuates that fact that Luftrauser draws its conceptual inspiration from Germany’s devastatingly advanced WWII-era Luftwaffe air force. While no Nazi iconography is present, the uniforms and attitudes of the stylized militants evoke a pulpy, cartoonish, yet vaguely sinister vibe. Vlambeer does a good job of toeing the line throughout the majority of the experience, but parents (this is rated “E for Everyone) should know that the characters helping the player look and feel like Nazis. I personally feel this edgy, stylized faux-Nazi aesthetic helps sell the experience, but it might not jive with everyone. Outside of the brief cutscenes and handful of characters, the look of the core gameplay is innocuous.

The airborne chaos doesn’t end when you demolish the opposition’s tremendous battle zeppelin; online leaderboards and an insanely difficult bonus mode keep the action fresh. Luftrausers is one of the most satisfying, enthralling arcade shooters to hit the market in recent memory.

Vlambeer previously released Luftrauser as a free Flash game. Give it a shot to see if you like the core concept. 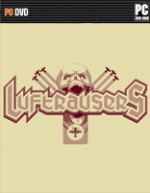 Vlambeer's latest offering places you in the cockpit and makes you feel like one of history’s soaring champions.