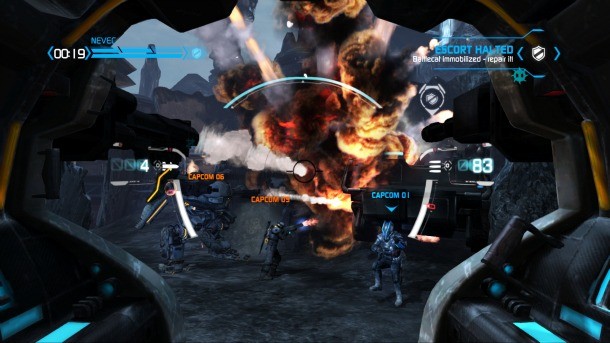 Capcom is letting NEVEC forces and the Snow Pirates go at it in Lost Planet 3's four multiplayer modes.

The game also features six maps where combatants on either side will have to battle each other as well as the hostile elements of the planet E.D.N. III (although by the looks of the trailer below, it's not so cold that you need a hat).

Today Capcom is talking about two particular modes: Scenario and Akrid Survival. The former mixes up offensive and defensive challenges for each team, while the latter has the two sides (of three players each) competing against each other independently to see who can beat back waves and waves of Akrid before the NEVEC and pirates face off in a PvP elimination round. Multiplayer also includes customizable loadouts, vital suits, and ziplines.

At the end of the trailer, you can also get some info on the game's pre-order bonuses, which include five multiplayer characters (including Hunk from Resident Evil), and two rig weapons.

Lost Planet 3 comes out on August 27 for PC, PlayStation 3, and Xbox 360. Click here for our hands-on impressions of the game.