Thanks to Nintendo’s stable of time-tested mascots, there is no shortage of excellent platformers on the Wii. With Lost In Shadow, Hudson Entertainment aims to deliver a more mature adventure to gamers, trading in kid-friendly humor for an introspective storyline and action-heavy platforming for challenging puzzles. Lost In Shadow delivers on the latter, but even with some clever, continually-evolving game mechanics, the entertainment is dragged down by painfully unresponsive controls.

Like the main protagonist, Lost In Shadow’s storyline doesn’t have a lot of weight. You play as the shadow of a boy that has been separated from his body and cast off of a giant tower. In order to reunite with your body, you must make your way back up the structure one level at a time, solving puzzles and collecting gems to unlock each new floor. The only other story elements are delivered in the form of signposts that contain short musings on your predicament, but they don’t really go anywhere. Instead, the game focuses on your long climb back to the top.

Lost In Shadow starts out slow, and the lethargic gameplay will likely scare off many players before the game gets good. Your character controls similarly to the prince from the old 2D Prince of Persia titles, with a hefty delay every time you change directions, jump, or climb ladders. The combat is more affected by these poor controls than the platforming is, as you move too slowly to effectively dodge the attacks of your enemies. This becomes less of a problem as your health bar increases (via reading the aforementioned messages), but only in the sense that it allows you to absorb more cheap shots. The biggest issue, however, is the lack of save points. Dying on a floor requires you to completely restart it, which can easily negate 15-30 minutes of gameplay. You can force a save by returning down a level, but the amount of backtracking required makes it more trouble than it’s worth.

Luckily, Lost In Shadow’s puzzles largely overcome these considerable flaws. The game throws a number of mechanics at you, such as shifting light sources, rotating viewpoints, and moving foreground objects, all of which transform the shadow landscape you traverse. A new mechanic is introduced halfway through the game that introduces some light three- dimensional gameplay and creates more compelling puzzles. As I closed in on the final floors of the tower, I had a hard time putting down the controller. A late twist introduces a bit of unnecessary backtracking, and some floors feel excessively labyrinthine, but neither of these issues drag the overall gameplay too far down.

Ultimately I can’t recommend Lost In Shadow to everyone. The puzzles and combat are too difficult for children (even on easy mode), and platforming fans will be put off by the unresponsive controls. Lost In Shadow can’t compete with Nintendo’s first-party offerings, but if you can accept its flaws, the mind-bending puzzles will keep you entertained to the end. 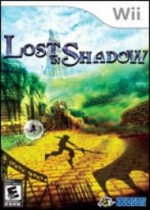 Lost In Shadow delivers a mature adventure to gamers, but even with some clever,
continually-evolving game mechanics, the entertainment is dragged down
by painfully unresponsive controls.

Purchase More Info
7.5
i
Game Informer's Review System
Concept Make a platformer/puzzle game in the vein of Ico and Limbo
Graphics The visual filters make it look better than most Wii titles, but they’re sometimes overdone
Sound Ambient noise and a few enemy squeaks are about all you’ll hear
Playability The sluggish controls and frustrating combat are the game’s biggest drawback
Entertainment Lost In Shadow can be tedious, but those who stick with it will be rewarded
Replay Moderately Low