Lord of the Rings: Conquest Review

When Electronic Arts announced that Pandemic Studios, the developer behind the Star Wars: Battlefront series, was working on a game based on The Lord of the Rings, I rubbed my hands together greedily and whispered ''my precious'' from a dark corner of my office. On paper, this seems like the perfect pairing of a franchise and developer. From Helm's Deep to the assault on Osgiliath, most of Middle-earth's battles are large-scale skirmishes, the very foundation that turned the Battlefront series into a runaway success. Aragon replaces Luke Skywalker. Slow-moving oliphaunts take the place of lumbering AT-ATs. Orcs step into the ''we're just fodder'' boots of stormtroopers.

Envisioning a re-skinned Battlefront is easy, but executing on this concept is a different story. Conquest retains the Battlefront identity of large-scale conflicts that can be played from the either side. All of the major battles depicted in The Lord of the Rings have been recreated, many placing the player at the pivotal turning points. In these epic wars, players can choose from four different classes: a warrior who charges headfirst into the fray, a mage who can heal troops and cast fire and lightning, a scout who can perform stealth kills, and a fleet archer who can down three foes with a spread shot. When a player performs well, they are granted access to a hero like Gandalf or a balrog.

The pieces are all in place, but none of these aspects play out like I had hoped they would. If anything, the turmoil on the battlefield made me want to flee Middle-earth faster than the elves that sailed for the undying lands. Engaging a large group of enemies is similar to playing Russian roulette, in that one out of every six encounters is bound to leave you dead. The reaper visit can occur when your character is yanked off of a ledge by a mysterious force, when the game fails to recognize your move inputs and leaves your character motionless in a sea of hostiles, and when hordes of enemies don't let you get up after being knocked down. As this is happening, your AI teammates do nothing to help, and often seem like they are tripping on acid as they stare blankly at walls and sunsets.

These gameplay issues corrupt the entire game, be it single-player, the four-player split-screen, or the 16-player online bouts. Had this functionality been stable, would it even have mattered? Not really. None of the objectives offer any excitement. Most of the game forces players to stand in a circle until a timer ticks down. When it reaches zero, whether the battle is over or not, the stage is complete.

Outside of clips stolen from the motion picture, you won't find any kind of story here, either. Pandemic worked wonders with Star Wars, but couldn't grasp the One Ring. Conquest is a joyless trip through familiar territories, and sadly, nothing more than that.

4.75
About Game Informer's review system
Concept
Star Wars: Battlefront meets The Lord of the Rings, only to show us that ewoks and hobbits shouldn't wear the same cloaks
Graphics
The dreary, foreboding look of Peter Jackson's films is captured within the environments. The characters, however, tap into flashy moves that seem more appropriate for Dynasty Warriors
Sound
An ESPN-like personality commentates over the battles, delivering the sensation that you watching football, and not saving the world
Playability
Let's just say that spending a few hours on the battlefield will leave your hair thinner than Gollum's
Entertainment
Both online and off, this game brings nothing but frustration
Replay
Moderately High 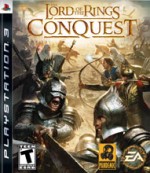 Lord of the Rings: Conquest