An SUV speeds ahead, packed with machine gun-firing goons. Your friend is with you, but he isn’t making any sense. You shred the vehicle apart with your own guns and hit the turbo and speed under the flaming wreck – you need to get to Scottsburg, Indiana soon if you want to make the freedom rally in time. Then you start thinking aloud about Weekend at Bernie’s 2, and how it wasn’t as good as the first one. The voodoo curse was pretty cool, though. Welcome to Lococycle, the best game about a sentient motorcycle dragging a guy around that has ever been made.

As I.R.I.S. the motorcycle, you were built by defense contractor Big Arms for combat. After being struck by lightning, you gain sentience a la Johnny Five from Short Circuit. While your mechanic, Pablo, attempts to undo the damage, you spy a commercial for the freedom rally. Freedom sounds good, so off you go. Unfortunately for Pablo, his leg gets snagged on I.R.I.S., so he becomes an unwitting participant in the field trip. Much of the game’s abundant humor comes from I.R.I.S.’ keen interest in bad movies and her inability to understand her friend’s desperate pleas for help (her Spanish-language translator was damaged in the accident).

Big Arms is understandably upset that one of their flagship weapons has taken off, so it sends out an army of private contractors and robotic minions to stop her. As I.R.I.S., you usually begin each section talking about the freedom rally (she really is obsessed) or reflecting back on films like Ski School and the aforementioned Weekend at Bernie's 2. All the while, Pablo screams for help, often yelling at the Big Arms employees and asking why they don't recognize him. Then the fighting begins.

Combat starts simple, and doesn’t rise much above that. I.R.I.S. is a capable brawler, knocking enemies around with her wheels, and doing the motorcycle equivalent of punching and kicking – all at high speeds. After a few levels, you settle into the basic groove. You’re usually fighting several enemies at once, and you can temporarily detach Pablo and throw him at other bad guys like a boomerang. It’s mindless fun, but fun nonetheless. Building combos is simple; you just jam on the attack buttons as quickly as you can until your opponent is down, then repeat.

Some enemies do sneaky things, like zip ahead of I.R.I.S. and fire off lasers, so you have to turbo up to them while avoiding their attacks. Once you get close enough, however, it’s the same button-mashing song and dance. Occasionally, you can counter enemy attacks, but even that doesn't require much skill beyond pressing a button when a giant crosshair appears on them. Your combat prowess earns you points, which you can use to upgrade I.R.I.S.' attacks, speed, and more. Don't worry about being frugal or careful, since you can easily upgrade everything before you cross the Indiana border. Fortunately, boss battles and minigame-like diversions pop up at regular intervals. I enjoyed one section in particular, where I played as Pablo and blasted a hulking robot apart in several extended shooting sequences.

I.R.I.S.' navigation chip must have also been destroyed in the lightning strike as well, considering the circuitous path she takes to Indiana. You travel from desert environments through beaches and frigid arctic zones. It's all cosmetic, however. There's not really any difference between a canyon or a beach, other than the scenery. You don’t crash when you hit the rails on the sides of the road, either, leaving the impression that you’re just rolling along on a treadmill.

Lococycle is an Xbox One launch game, and as such is going to undergo plenty of scrutiny. The million-dollar question of course being, "Does it look like a next-gen game?" It certainly looks nice, but it's not an immediate knock-your-socks-off improvement; after all, the game is eventually coming to Xbox 360, too. Players who look closely will appreciate its impressive draw distance (you can see objects on the horizon when they're tiny specks), but you do have to look for it.

Lococycle isn’t complex, but I was easily sucked into its silliness. I wanted to see where this intentionally stupid story was headed, and it was worth the trip – even if the game itself isn't very deep. 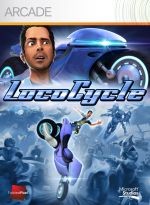 The best game about a sentient motorcycle dragging a guy around that has ever been made.

Purchase More Info
7
i
Game Informer's Review System
Concept Steer a sentient motorcycle toward freedom, dragging your hapless mechanic along the way
Graphics Lococycle looks good, but it's not breaking new ground
Sound I.R.I.S. makes the game with her stream of references and obliviousness to the danger she's constantly facing
Playability The difficulty is forgiving – almost to a fault. You can't crash, and the combat often feels like it's on autopilot
Entertainment You can tell that Twisted Pixel had a great time making Lococycle. It's a fun, quick experience, but not one you're likely to repeat
Replay Moderately Low