The most important thing to understand about LittleBigPlanet Karting is that it feels like a LittleBigPlanet game. This is much more than a karting game with a LittleBigPlanet coat of paint. Everything you know about the franchise is here: customization, excellent soundtrack, creative visuals, collectibles, Stephen Fry’s dulcet tones, that adorable sackperson, and more creation tools than any reasonable person could ever figure out how to use (somebody will, though). This is more than just a LittleBigPlanet off-shoot. It’s a full entry into the LittleBigPlanet franchise that just so happens to place Sackboy into a vehicle.

The layout and menu system is immediately familiar to anyone who has ever dabbled in the planet of oxymoronic size. You have your cardboard hub where you can customize your character and his or her vehicle. Hanging from strings in the background are a series of planets housing your created levels, everyone else’s created levels, and the campaign levels included on the disc. Everything, planets included, can be stamped and customized to your own bidding.

The campaign offers a story about nearly nothing. The assorted tracks have very little to tie one another together, but there are some humorous quips here and there from the characters you meet. The evil Hoard is messing up everyone’s daily routine, and it’s up to you and your kart (which is emblazoned with cat stickers if you’re anything like me) to stop them.

The racing is simple and doesn’t offer a lot of opportunity for crafty tactics. With the exception of a few little tricks, much of your success comes down to luck and avoiding death. You can drift around corners, and if you are able to maintain your slide long enough, you can activate a boost. Outside of that lone tactic, your best bet is to think carefully about when to fire your weapons, avoid obstacles, and hit every boost possible.

Control feels loose, but not to the point of frustration. Much like Sackboy’s platforming antics, it takes a little bit of getting used to, but it feels right once you find your stride. You will need to play a few tracks before fully grasping the controls, which may turn away impatient players.

All of the available weapons serve both offensive and defensive functions. A handy alert pops up whenever missiles and other explosives are sneaking up behind you, calling out the exact moment where you can fire your weapons backwards to avoid a crash. Expertly thwarting incoming attacks from behind feels great and the alert helps new players from feeling like they are victims of explosive circumstance.

Track creation starts out simple, blending aspects of LittleBigPlanet’s past and ModNation Racers. Laying out a track and test-racing on it is easy. After that, things can get as complicated as you want them to. Everything from what’s going on in the background to how players interact with the road is under your control. It’s intimidating, but LittleBigPlanet Karting offers you every tool you need to make the course you’ve always dreamed of with a little imagination and patience.

The PlayStation Move Racing Wheel
If you want to play with the Move, you need to purchase the PlayStation Move Racing Wheel, a new $40 peripheral. The game won’t work with just the standalone Move wand. I can’t in good conscience recommend playing this game with the Move controller and its peripheral. During my first playtest with the PlayStation Move Racing Wheel, I was careening left and right all over the track. I eventually got my bearings, but still struggled to ever drive in a straight line. It’s unwieldy and the slight delay means you will be hitting a lot of obstacles as you corkscrew your arms in attempt to simply turn left. Perhaps the biggest problem with the wheel though, is that it doesn’t feel like a steering wheel. Without any kind of anchor, it’s just an awkward contraption that you rotate in your hands. On the plus side, the wheel does have a d-pad, which isn’t disabled for racing. If you get tired of using the wheel, but don’t feel like going through the process of turning off the Move controller and tracking down your Sixaxis or DualShock 3 controller, you can just hold your hands still and use the directional buttons.
Off
On
Off 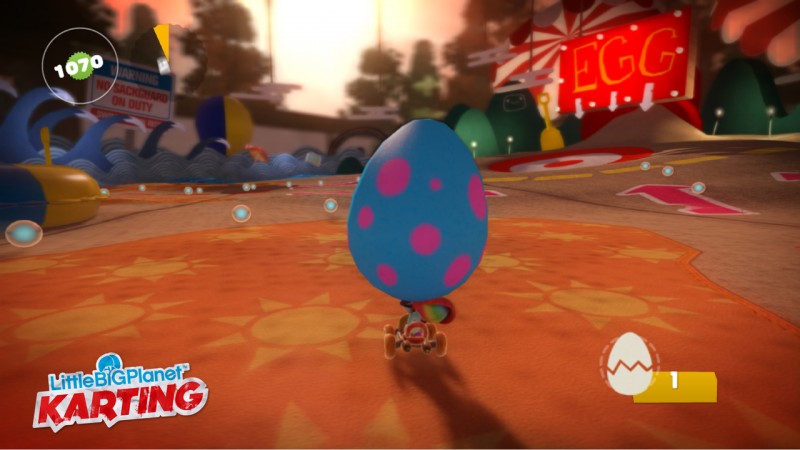 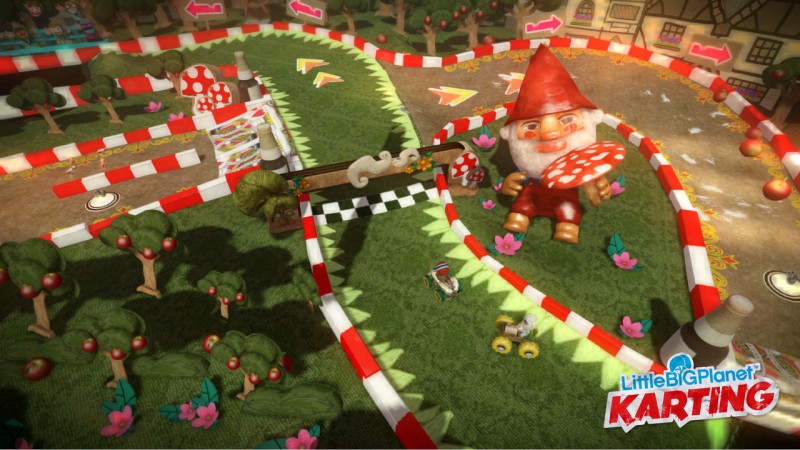 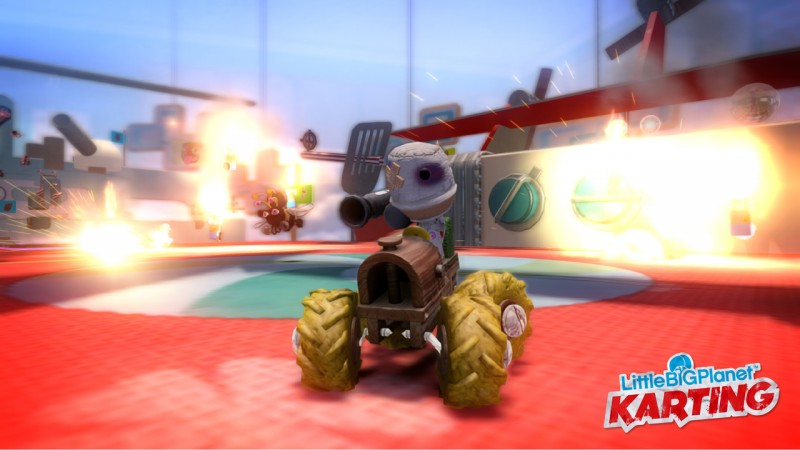 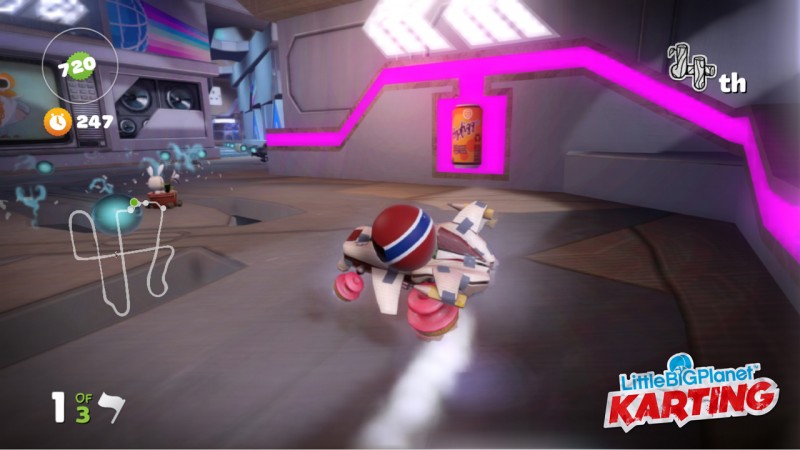 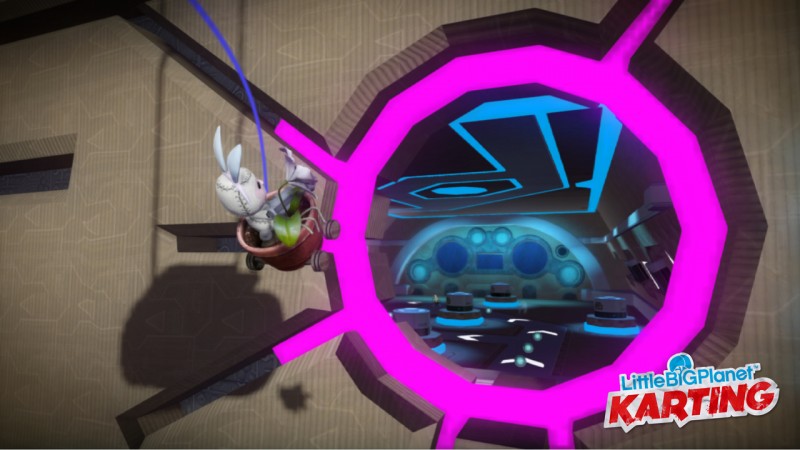 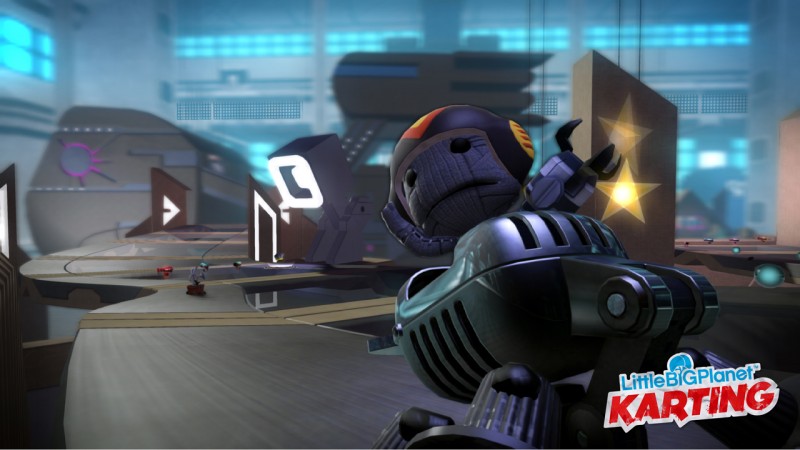 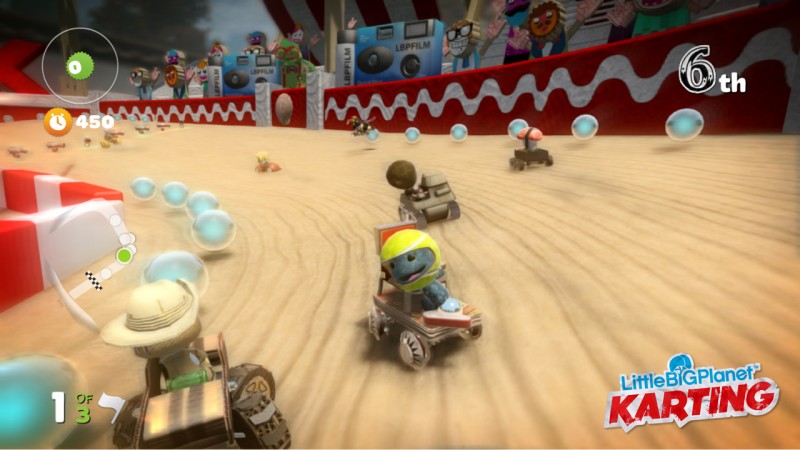 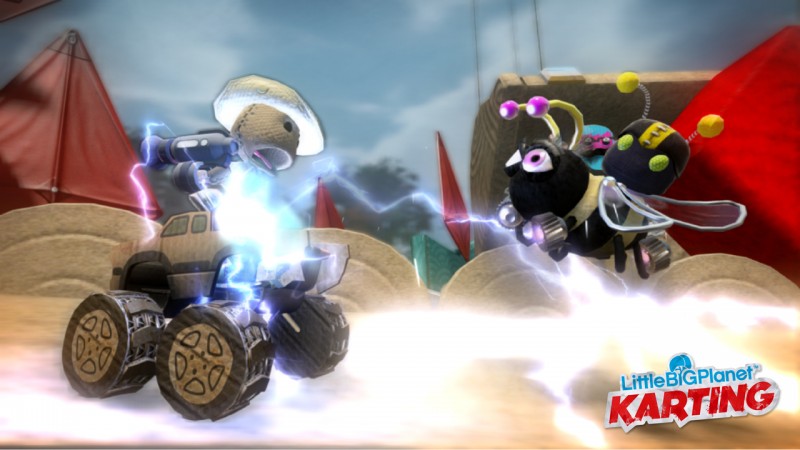 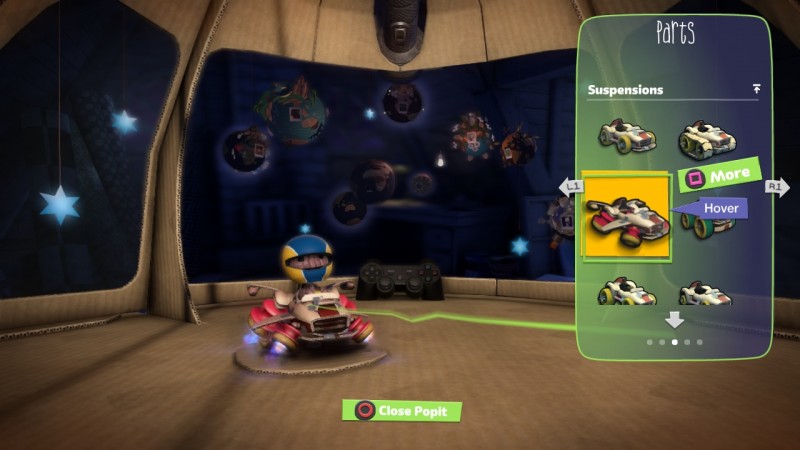 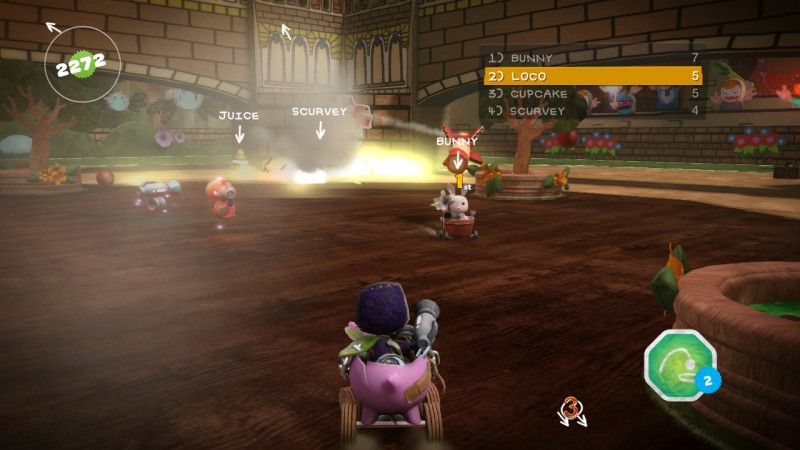 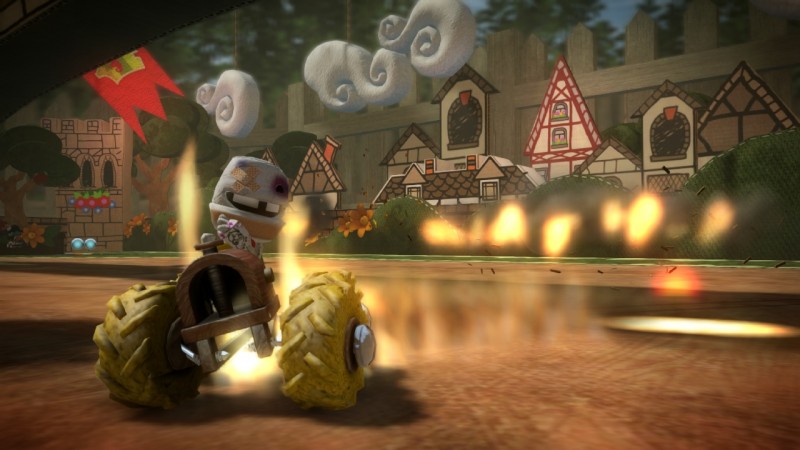 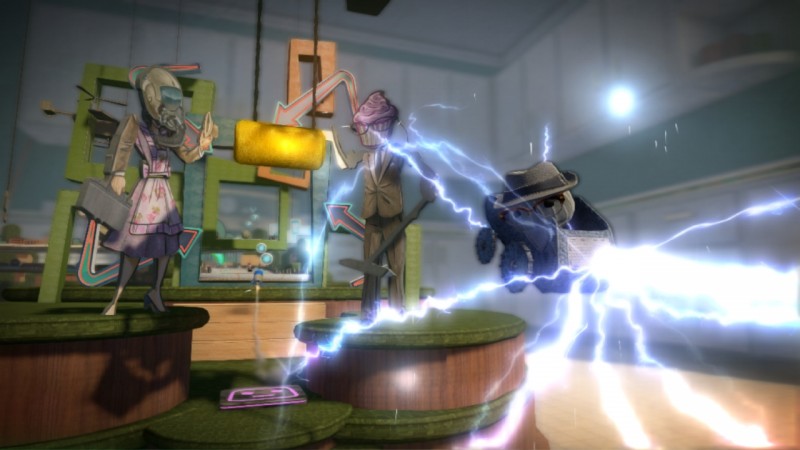 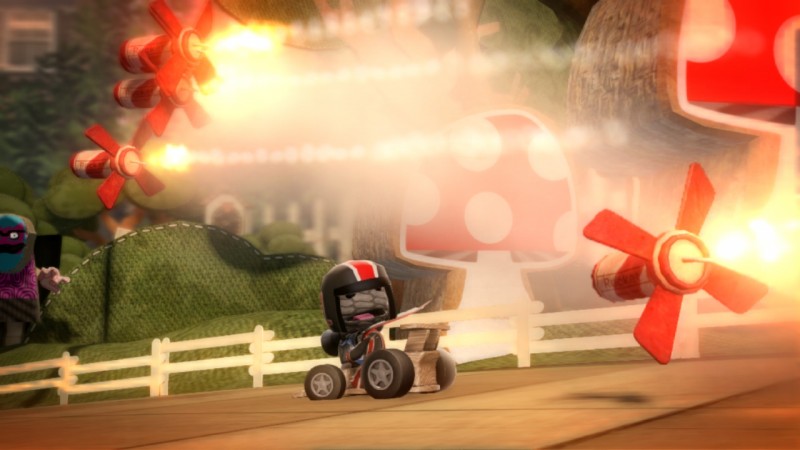 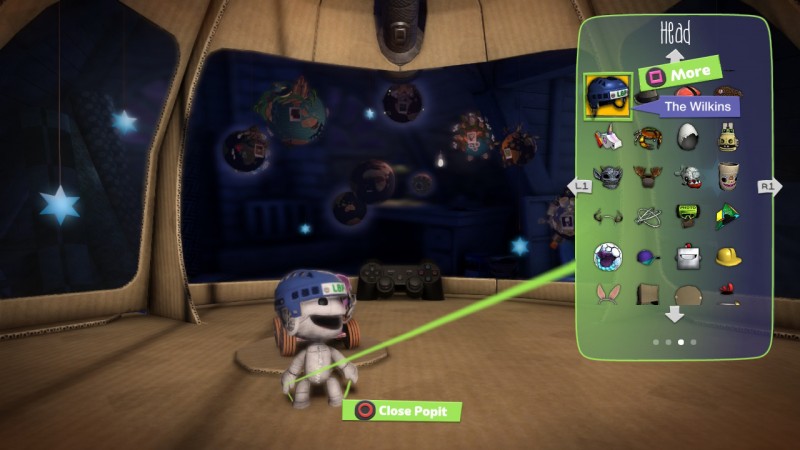 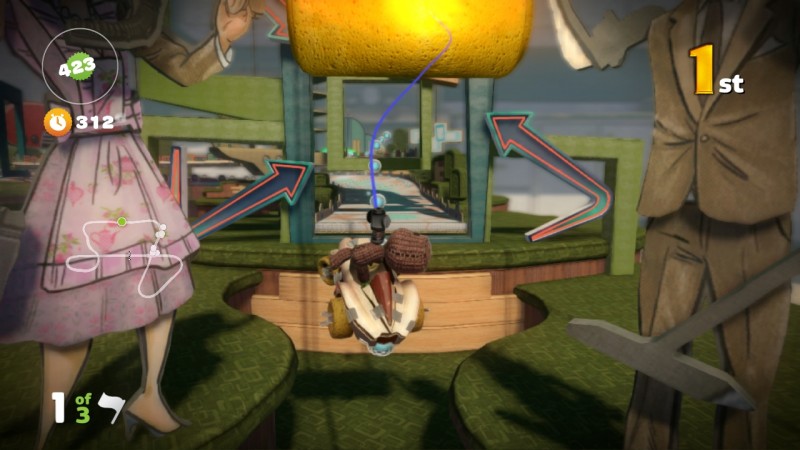 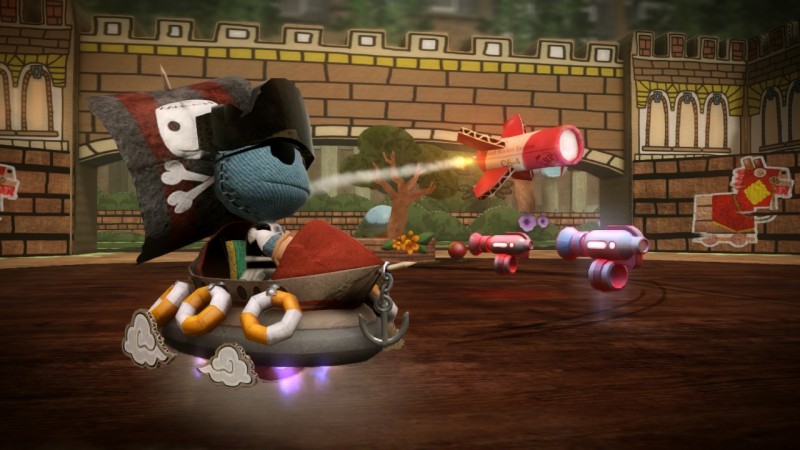 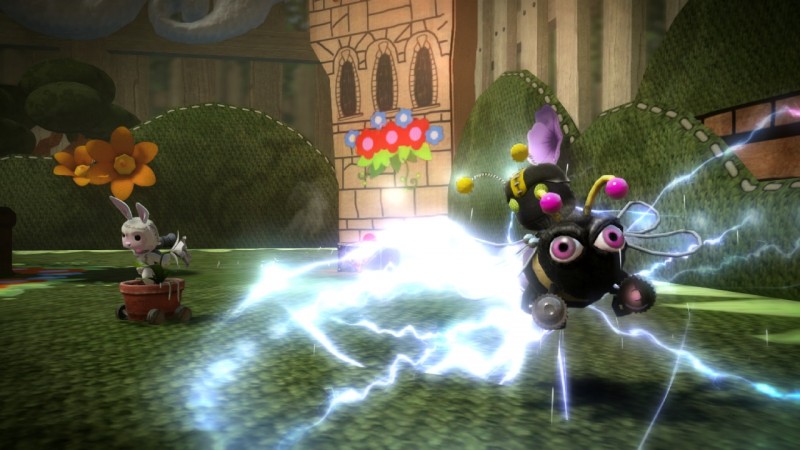 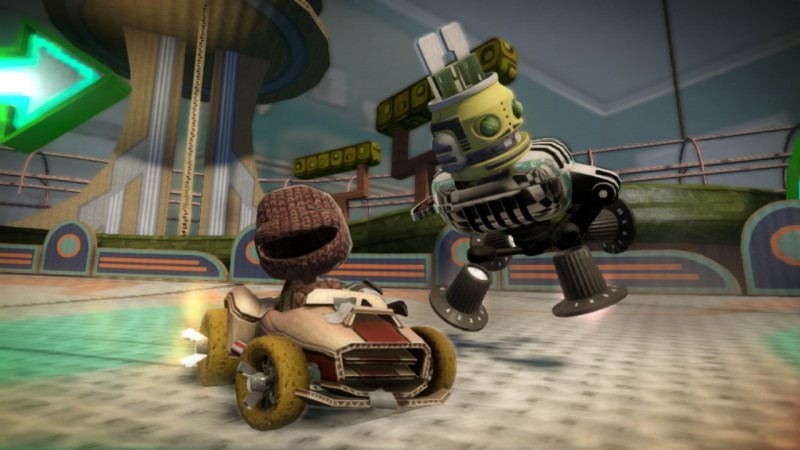 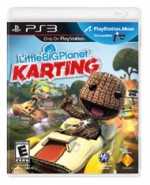 This is more than just a vehicle for Sackboy’s mascot potential. It’s a new LittleBigPlanet game.

Purchase More Info
8
i
Game Informer's Review System
Concept Take Sackboy out of his platforming world, and put him behind the wheel in a proper kart racer
Graphics The adorable aesthetic of the LittleBigPlanet world is a joy to look at, regardless of whether you are in a kart or on foot
Sound The licensed music pairs with the racing action perfectly. Every track invades your subconscious mind, and you will be more than happy to hear it all reverberate between your ears
Playability LittleBigPlanet’s platforming is a little floaty, and its racing is a little loose. It’s rarely a problem, but it does take some getting used to
Entertainment Sackboy’s transition from platformer to kart racer succeeds and offers a fun experience surprisingly similar to the previous games
Replay High