LittleBigPlanet is a gaming epiphany -- one of the rare titles that opens new horizons on the landscape and changes the way you think about interactive entertainment. It blurs the lines that have traditionally separated single-player, multiplayer, creation, and community in a brilliant and refreshing twist on the familiar 2D platformer. Using this classic genre as a vehicle, Media Molecule has developed a charming adventure that mines the past to give gamers a glimpse of the future.

No matter what aspect of the LittleBigPlanet appeals to you, it all starts with the game's infectiously adorable mascot, Sackboy. He doesn't talk, but you can add tons of personality through customization, emotes, and hilarious arm-flailing (which is especially fun in co-op). He is easily one of the most likeable characters I've ever controlled -- but even with this precious little hero, it would be a mistake to say LittleBigPlanet is aimed at a younger audience. Underneath the cute aesthetic is a wildly inventive and challenging game that requires genuine skill.

As in every platformer, your goal is to move from point A to B and overcome obstacles along the way. In LittleBigPlanet, the distance between those points is full of unique gameplay that goes beyond simple ''jump over the pit'' solutions. Every rope, lever, and crazy contraption relies on a realistic physics engine; get suspended platforms swinging to reach hidden items, pilot a dirigible through the sky, or grab a spinning wheel and let go to propel Sackboy upwards. Those are just a few examples of the great moments scattered throughout the game, and the stages become progressively more amazing and imaginative. What begins as simple grab-and-pull puzzles culminates in some of the best platforming to date, with whirling cages of death and awe-inspiring boss battles.

Unfortunately, the same physics engine that allows for so many great interactions is also the source of the game's only glaring problem: short jumps. Precise landings are frustratingly difficult to negotiate -- a flaw that will force you to replay a handful of levels multiple times. It's even worse when you're playing co-op with a group of varying skill levels. However, the number of spots where this is an issue is astronomically small when compared to the number of times you'll say ''Wow, that's awesome.''

After you've admired Media Molecule's work, it's time to start doing your own. The creation tools included with the game allow you to make anything you see in the single-player story, plus just about anything else you can conceive. Spend your time creating whole levels, focus on bizarre vehicles, or give rise to deadly enemies - the whole process is remarkably easy thanks to the intuitive interface. The tools are complicated enough to perform complex tasks, but simple enough to be accessible to any motivated gamer.

Uploading your creations or checking out what other users have made (the community has already generated some astounding stuff) is as simple as a few button presses in the main menu. You can enjoy other users' content without making anything yourself, but you should at least play through the creation tutorials for yourself. By peeking behind the curtain and understanding how all the parts interact, the elaborate and mind-bending contraptions you encounter later become even more inspiring.

LittleBigPlanet's design is so clever that even if it were just the single-player story mode, I'd still recommend it to anyone. But the game's greatest achievement is how its multiple layers feed into each other. It's easy for co-op buddies to jump in and out of your single-player game, and all the while you're unlocking objects you can use in the creation mode. The whole experience is seamless, and it sets a new standard for how different modes can come together. In fact, I think LittleBigPlanet sets a lot of new standards that other titles will be striving to emulate in the coming years. 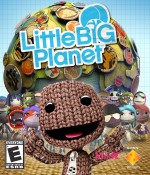 LBP Leads the Way to a Bright User-Created Future

Purchase More Info
9.5
i
Game Informer's Review System
Concept Redefine the 2D platformer, then give players the tools to do the same
Graphics A deliberate and gorgeous mixture of realistic and cartoonish design
Sound Whether you're swinging in the trees or deep in a fiery cave, the music selection matches the situation perfectly
Playability Excellent physics makes the world easy to grab, drag, and blow up. Precise jumps are harder to land than they should be, though
Entertainment Whether it's the gameplay, humor, or sheer cleverness, this game will keep you smiling
Replay High