Let's Tap represents gaming legend Yuji Naka's return to hands-on game design after climbing the corporate ladder at Sega and leaving to start his own company, Prope. The simple idea of laying a Wii remote facedown on a box, tapping on said box, and creating minigames based on these vibration inputs is certainly clever, but Prope shouldn't have put all of its eggs in one basket...er, box.

The first of five minigames, Tap Runner, sounds great on paper. Players drum lightly to make a little man run through an obstacle course and hit harder to jump. Easy enough for everyone to play, right? I had to go through at least two dozen configurations tweaking the in-game sensitivity, swapping out different boxes, yanking the rubber remote jacket off, and even trying out some drum sticks. Eventually, I settled on a serviceable configuration, but even then it felt like I had only about 85 percent control of the proceedings.

Rhythm Tap is almost an exact copy of Donkey Konga, as players drum along to gems scrolling from right to left. All 16 infectious electro tracks are fun to play, but the experience is easy to blast through in less than an hour. Thankfully you can ignore the tap strength directions on the notes, otherwise this game would be ruined, too.

Silent Blocks focuses around a tower of multicolored hexagon pancakes. The first game has players pass around a single remote as they carefully tap out blocks without knocking over the entire tower. The other variant, Alchemist, involves tapping out blocks in order to match and clear at least three blocks of the same color. Earning combos can be satisfying, but the lack of depth prevents Alchemist from gaining any traction.

Bubble Voyager looks like a side-scrolling shooter, but is best compared to the swimming levels in Super Mario Bros. You tap lightly to float upwards and dodge hazards and hit harder to shoot projectiles. This has the same spotty control issues as Tap Runner except it's not separated into discrete levels so you have to start over from the beginning every time. Also, it's absolutely no fun.

The strangest thing of all on Let's Tap is the Visualizer. This is essentially a glorified screensaver that lets you launch fireworks, splash some water around, bounce balls, or splatter paint and ink on a canvas. That's it. I simply can't imagine anyone trying this mode for more than five minutes unless they were on illicit drugs. Perhaps you could say the same for the entirety of Let's Tap. 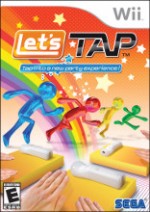 Purchase More Info
5.5
i
Game Informer's Review System
Concept Finally deliver box slapping gameplay to the Wii
Graphics Sleek, simple, neon
Sound Catchy electro music is great, but all of that hand drumming drives innocent bystanders absolutely nuts
Playability Some minigames work, others take a lot of work to get functioning
Entertainment Might be a decent choice if you're into experimental gameplay or Donkey Konga
Replay Moderate