Traveller’s Tales Casts Another Charming Spell Over Old Mechanics
by Bryan Vore on Jun 29, 2010 at 10:00 AM Traveller’s Tales tried to break out of its LEGO formula with Indiana Jones 2, and the results weren’t that great. The studio has returned to the classic structure for LEGO Harry Potter. For the most part, it works.

Wizard powers are quite similar to the Force, so you’ll float pieces into place without stretching the fiction too far. The game leans on this mechanic frequently, so prepare yourself for plenty of exploration and “puzzle solving.” The reason for those sassy quotation marks? Outside of a few challenging rooms, most puzzles consist of breaking everything, holding down a button, watching a structure build itself, and then using said structure to jump to a higher platform. I turned my brain on autopilot for most of the game. Harry doesn’t spend a lot of time battling minions in the books. It’s more about discovering the wonder of Hogwarts and maybe taking on a school rival or evil wizard. To stay true to the material, combat is scaled back considerably from previous LEGO titles. The only real battles in the entirety of the Year 1 section are against the bathroom troll, Professor Quirrell, and some wasps in the forest. Combat picks up later on, but if your favorite part of LEGO games is cutting down an endless flow of stormtroopers with a lightsaber, this may not be the one for you.

Despite these setbacks, it’s hard to not be charmed by LEGO Harry Potter. Traveller’s Tales maintains its reputation for amusingly silly interpretations of characters and story points, and I found myself constantly looking forward to how the team would handle the next thing around the corner. The constant flow of unlocks in Gringotts Bank and shopping along Daigon Alley stirred up old feelings of addiction I had playing the Star Wars titles. While Harry Potter doesn’t offer much innovation for the LEGO franchise, it at least puts it back on track.

7.25
About Game Informer's review system
Concept
Paste the LEGO skin over another beloved franchise
Graphics
Ninety-five percent of all the characters look alike except for their tie colors
Sound
It’s always fun to hear mumbled versions of the characters’ voices
Playability
Spell targeting is iffy at times
Entertainment
Co-op fans will have to keep it local until a free patch opens up online play shortly after release
Replay
Moderate 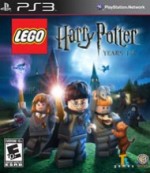