Whenever a gaming company launches new technology, some titles will fail to take advantage of the new hardware. To put Kung Fu Rider in this category would be exceedingly generous. This is a game about riding office chairs, and through some reverse miracle, the developers actually managed to make the game stupider than it sounds.

When I first started the game up, I actually thought Kung Fu Rider might offer greater character depth than the racial stereotypes that compilation games like Sports Champions and Racquet Sports have offered to Move owners. Man, was I wrong. The entirety of Kung Fu Rider's "story" unfolds on the menu screen. A private detective named Toby and his vapid assistant Karin are being chased by the Yakuza for unknown reasons (Karin even laughs at Toby when he asks why the mob is after them, as if desiring any sort of back story is absurd). To ditch the criminals, the pair decides to split up and ride office chairs down the streets of Megalopolis to a van that will drive them to safety. That's it. The end.

The gameplay consists of short races down six city streets, during which you avoid (or crash into) objects, cars, and civilians. The aforementioned Yakuza members spring easily avoided environmental traps on you to impede your progress. Kung Fu Rider is vaguely reminiscent of Tony Hawk Ride in its poor implementation of motion controls, and for the fact that neither game should have made it out of the first brainstorming session. The developers managed to pack quite a few moves into the game's control scheme, but none of them work well. Jumping on your chair (performed by jerking the controller up in the air) is laggy and only registers half of the time. Leaning back to go underneath obstacles (tilt the controller up and hold the trigger) makes it impossible to steer. However, the worst design of all is making players shake the controller up and down to go faster. You will be doing this the entire time you're playing thanks to an annoyingly slow top speed and the fact that running into objects usually leaves you at a standstill.

Each course has four or five variations, requiring you to replay each area with slight route changes and increased difficulty. Greater difficulty comes in the form of more objects between you and your goal, to the point where the hardest levels have piles of junk around every corner, waiting to knock you off of your chair. On the off chance that you actually want to progress to the next course, you will eventually have to make it to the end of the level, which can be annoyingly difficult when you're getting dethroned every five seconds through no fault of your own. Whenever you crash, the game takes a grainy picture of your face with the PlayStation Eye. I didn't realize how much I wasn't enjoying Kung Fu Rider until I saw these candid glimpses of my misery. In fact, even after I had unlocked all the courses, I still couldn't understand what the appeal of the game was - until I switched to Toby's buxom assistant (the second playable character). Her seductive poses and excessive jiggling will surely entertain anyone with a sufficient lack of taste to purchase this game in the first place. The only thing that managed to bring a smile to my face, however, was purposely steering Karin into traffic during the game's free roam mode.

The game's multiplayer mode (one player controls the racer while the other moves a magical floating hand around the screen to pick up money and objects), nicely sums up the product as a whole: an insultingly shallow cash-grab. The only saving grace to Kung Fu Rider was that I had unlocked and played through all of the game's courses in less than an hour. How Sony thinks Kung Fu Rider justifies being a full retail release (even with the reduced $40 price tag) is beyond me. 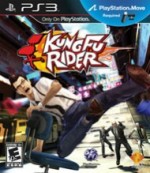 e, the developers actually
managed to make the game stupider than it sounds.

Purchase More Info
3.5
i
Game Informer's Review System
Concept Try to make a game about riding office chairs not suck
Graphics There’s a lot of action taking place on screen, but not a lot of detail
Sound The eccentric soundtrack is one of the few decent things about this game
Playability True to racing an office chair in real life, Kung Fu Rider controls like pure crap
Entertainment Watching your player get run over by cars in slow-motion is all the amusement you’re going to get out of this dud
Replay Low