When developer Ice-Pick Lodge first proposed Knock-Knock on Kickstarter, it offered an enticing vision of unique gameplay mechanics, randomized environments, and a mysterious story, all wrapped in a gorgeous visual package. After a year of development, the indie game's release leaves much of the promising pitch on the cutting-room floor. While the art style lives up to expectations and the narrative contains plenty of mystery (too much, actually), playing Knock-Knock simply isn't much fun.

In the same way that B-movie horror films try to mask their low production values with tongue-in-cheek campiness, Ice-Pick Lodge explains away Knock-Knock's half-baked game design and barebones narrative with a bizarre bit of meta-game fiction. An opening message warns players that Knock-Knock isn't a "game" per se, but rather an "interactive meditation" that the developer pieced together based on instructions from an anonymous benefactor. The message also warns that the game's "many strange things and unclear moments" are (conveniently) due to those mysterious design requirements. While Ice-Pick Lodge's explanation of the game's flaws and limitations is certainly novel, it doesn't earn the developer a pass for failing to balance the gameplay, flesh out the mechanics with some much-needed variety, or craft a meaningful narrative. Knock-Knock's gameplay is dreadfully simple. As the pajama-clad protagonist, your task is to shuffle around an increasingly complex series of randomly generated houses, opening doors and flipping on and off light switches to check for monsters as you wait for dawn to arrive. Monsters spawn randomly in certain rooms during the night, requiring you to either hide behind furniture or move to other areas of the house. If one catches you, more time is added to the countdown, taking you further away from dawn. Get caught too many times, and you'll have to replay the level.

If Knock-Knock sounds like an interesting twist on the tower-defense genre, it isn't. While you spend your nights patrolling the house, you aren't actually increasing your defenses, as your actions have no discernible or repeatable effect on where or when monsters spawn. You also don't have any offensive or defensive capabilities, so there's not much you can do other than continue creeping through rooms and hoping that a shadowy specter doesn't spawn nearby (or directly on top of you, as is sometimes the case).

It doesn't take long for more flaws in the formula to emerge. Waiting ends up being the main mechanic, and although you can find clocks that speed up time by scanning rooms, they often lead to running into more monsters, limiting their usefulness. Most of the levels aren't big enough to offer alternate routes for avoiding enemies, which often pop up so quickly that your sluggish protagonist doesn't have time to hide or escape anyway. Some monsters can spot you even when you're hiding, leaving you with no other option but to run away – usually right into a dead end. The futility of your actions is underscored by a smattering of infuriating outdoor sequences, which task you with wandering through the woods until you meet whatever random (and unexplained, naturally) criteria is required for progressing to the next level. Maybe the player is meant to use these segments as an opportunity to meditate on the purposefully obscure story that the game barfs at you via note scraps and the garbled gibberish of the protagonist, but I didn't find them challenging, engaging, or remotely frightening.

That's true of the main levels as well; aside from a few jumps caused by loud noises and flashes of lightning, Knock-Knock is rarely scary. Some of the monster designs are creepy looking, but they disappear as soon as they touch you – half the time I never even saw what attacked me. Without any kind of meaningful setup or room for strategy, Knock-Knock's horror elements fall flat. I just found myself hoping the level would randomly spawn more clocks than monsters, and frustrated when it didn't.

Knock-Knock offers players two different endings based on how quickly they finish the game, neither of which provides any kind of satisfying conclusion or explanation as to what the heck is going on in the game. Ultimately, Ice-Pick Lodge is right; Knock-Knock isn't much of a game – or a story, for that matter – which makes it hard to recommend. 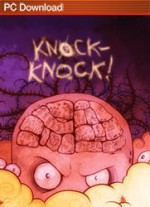 While the art style lives up to expectations and the narrative contains plenty of mystery (too much, actually), playing Knock-Knock simply isn't much fun.

Purchase More Info
5
i
Game Informer's Review System
Concept Turn on lights and hide from ghosts while enduring a hopelessly cryptic narrative
Graphics The stylized, hand-drawn visuals are by far the best part of the game
Sound The protagonist's Jawa-like chattering sounds like it was recorded with a webcam. The rest of the sound effects are adequate but forgettable
Playability The minimal control scheme works as intended, but the underlying game design is simplistic and flawed
Entertainment Knock-Knock's novel premise quickly gives way to repetition, boredom, and confusion
Replay Moderate