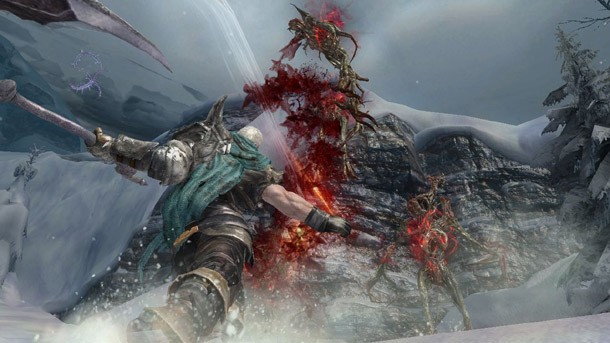 Knights Contract’s Heinrich is the antithesis of your typical video game protagonist. He’s old, arthritic, and scarred from head-to-toe. He walks with a limp, and every word he utters carries the sorrow of a lifetime of depression. He’s unlikable – intentionally so, perhaps – but the reasoning behind his state of mind and the means to cure it drives his story forward.

Heinrich once served as an executioner that specialized in beheading witches. Through periodic flashback sequences we see Heinrich carrying out the orders of Faust, a power-hungry dictator hell bent on purifying the land. One of the witches touched by Heinrich’s scythe, named Gretchen, showed no fear. With her head resting gently on a wooden stump, she casts a curse on Heinrich before he can lop off her head. Heinrich became immortal. This may seem like a blessing, but when we control Heinrich for the first time, he’s lived enough.

When I stepped into his tattered garb, my first instinct was to gift him with the death he sought. I lowered my guard and let a pack of monsters tear the flesh off of his hulking frame. They left nothing but his two legs – cut off just below the knees. The disturbing spectacle didn’t last long, however. By jamming on a button I reunited flesh with bone and brought him back to fighting form. Death cannot stop him.

His scythe strikes are slow and sloppy, an appropriate fit for his appearance. His foes, which range from armor-clad knights to skyscraper-sized snakes, could make short work of him, but he doesn’t fight alone. Gretchen is resurrected, and as fate would have it, she is forced to work with her killer.

The duo works well together, each offering strengths where the other has weaknesses. Gretchen is a powerful witch who can entangle foes in a magical briar, summon meteor showers, and make razor-sharp blades appear from the earth. When she’s had enough (as dictated by a power meter), she can grow to giant’s size and crush a foe in her hands or between her thighs. The spells she casts are satisfying, violent, and just a hair shy from being as outrageous as those unleashed in Sega’s beloved witch simulator, Bayonetta.

The player controls only Heinrich’s physical movements, yet handles the attacks for both characters. Heinrich’s abilities are mapped on the face buttons; holding down the right trigger transforms the buttons to Gretchen’s attacks. The battles are fast paced, and even the smallest of encounters can be a heart-pounding challenge. Heinrich's sword slashes can be chained together easily enough with timed button presses and an occasional analog tap. His attacks always landed where I wanted them to, and his movements telegraphed nicely to combo timing. Even though Gretchen's mechanics are mapped closely to Heinrich's, making her spells reach desired targets requires great effort, and a crab claw-like grip on the controller, as multiple shoulder buttons must be held prior casting a spell. 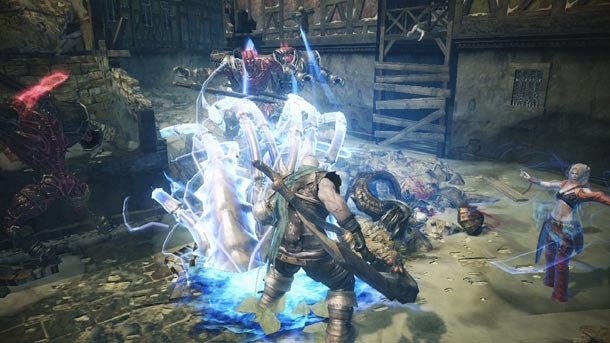 Heinrich’s melee attacks don’t deal nearly as much damage as Gretchen’s magic, but he has a deep list of combo chains at his disposal – very much in line with other genre heavyweights like God of War and Devil May Cry. Performing well in combat rewards the duo with valuable experience points that can be used to upgrade all of the spells. Game Republic did a great job of balancing the upgrade progression. Each step up delivers a significant boost.

No matter how powerful the duo becomes, the challenge revolves around keeping Gretchen alive thanks to her incompetent AI. She stands in fire, runs headlong into a boss’s grip, and performs so many ill-advised actions I’m convinced she could never cross a street on her own. If she perishes, it’s game over.

With her bumbling motions taking center stage, the game devolves into a ten-hour long escort mission. The only way to heal her is for Heinrich to pick her up and weave through hostile forces like an NFL running back until her health regenerates. Coming to her aid isn’t so easy, either. When Heinrich falls in battle, it takes time for him to reanimate; foes wisely use this lull to beat the snot out of the most defenseless witch to ever walk the earth. Equipment found in the world can make her more durable, but nothing improves her poor judgment.

Clashes with demons also run the risk of ending abruptly due to archaic design, such as an instant game over if Heinrich is knocked off of a ledge. This happens all too often, especially during boss fights. Worse yet, players must deliver the final blow to bosses via quick-time events. If you don’t nail all of the sequences correctly, the boss is rewarded one-third of its health back. Once depleted (again), you have to try the same quick time sequence over.

Heinrich and Gretchen’s journey is tiresome, but when the game works the way it should – with Gretchen being far removed from harm’s way, and Heinrich navigating ledge-free areas – the duo creates a wonderfully chaotic storm on the battlefield that empowers the player with the feeling of being unstoppable.

Even when the game seems to be working against me at every inopportune time, the drive to see the fate of Heinrich and Gretchen made me push forward. I’m glad I did. I didn’t see the ending coming. It's a satisfying reward at the end of a punishing journey. 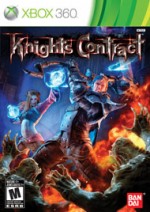 Heinrich and Gretchen’s journey is tiresome, but when the game works the
way it should, the duo creates a wonderfully
chaotic storm on the battlefield that empowers the player with the
feeling of being unstoppable.

Purchase More Info
7
i
Game Informer's Review System
Concept A witch and an immortal stir up trouble for demons and gamers alike
Graphics Vivid comic book colors and exotic creature designs blend to create a striking visual style. The cutscene animations are lifeless by comparison
Sound Heinrich reminds me too much of Frankenstein’s monster, whereas the voice actor for Gretchen is a perfect fit. The soundtrack complements the mood nicely
Playability The combat mechanics are similar to fellow games in the genre, but with an added weight to Heinrich’s attacks. Magic mixes up the combat chemistry
Entertainment Too much babysitting is required, but when you are not fishing Gretchen out of a lava pit, the unique gameplay shines and the story delivers in a big way
Replay Low