Console launches have a long and frustrating history of mediocre games. Knack is the prime example of a launch title that gave gamers a brief taste of what the PlayStation 4 could do before the adventure settled into a mundane rhythm of repetition. The showering of polygons ended up being the highlight in an adventure that rarely tapped into the potential of a size-changing hero. The idea was interesting enough to lure people in, but the execution didn’t quite hit the mark.

Enter Knack II. Iteration can go a long way in making a formula work, and that is crystal clear in this sequel, which clings to the core tenants of the inaugural release, yet finds ways to keep them exciting, fresh, and varied from start to finish. The changing scale of the character also grows in meaningful ways to deliver the sense of being incredibly powerful at 30 feet in height, and resourceful at just two.

Knack II clobbers the combat repetition that plagued the debut, and never falls into a rut. Instead, the action bounces from one challenge to the next. A typical level could begin with an average-sized Knack brawling against a handful of trolls, move on to tiny Knack using stealth to infiltrate a base, shift to a harrowing platforming sequence, and conclude with giant Knack laying waste to tanks and giants. Each level has a nice blend of action, along with well-placed secrets that require a keen eye to detect. I was impressed just how quickly it would move on from one challenge to the next. Combat is the most enhanced element, sewing in a variety of moves and powers that are fluid and fun to use. The feeling of being a force of pure destruction amplifies as Knack learns new abilities. These powers can also be upgraded by investing points in a skill tree that ups his speed, power and more. By the end of the game, even a smaller version of Knack can topple giants using a flurry of punches, roundhouse kicks, and aerial slams. He can even grab enemies and pull them in for a pummeling using an extendable arm, much like Mr. Fantastic. The enemy A.I. is quite resourceful, knowing when to rush if your health is low, and when to keep guard.

The first game pushed players to use the same attacks (sometimes modified by elements) against the same foes. As monotonous as it was, the combat was still surprisingly challenging. Knack II retains that difficultly, but it’s made less frustrating thanks to better checkpoints and less frustrating enemy designs. It also helps that, much like the first game, you can play this entire campaign with a friend via couch co-op. This is the optimal way to play, as new moves are unlocked when the two Knacks interact with one other. For instance, unleashing that flurry of punches into the back of your friend’s Knack will hurl relic pieces at your foe. The platforming sequences also require skill, but are rendered somewhat challenge-free given the lenient checkpoint system. Regardless of the challenge, the act of jumping feels great and is backed by harrowing designs filled with spinning gears, sliding platforms, and sections that require the player to switch between tall and tiny Knack in a flash. Again, variety is key to keeping the player off kilter. The puzzles littered between combat and platforming are perplexing, and do a great job changing up the flow of action.

SIE Japan Studio has created a game that I didn’t want to put down and enjoyed playing from start to finish, yet I never once felt a strong tie to the world or Knack as a protagonist. He’s as unlikable a character as I’ve seen in a game. He’s fun to control, and is somewhat cute in his tiniest form, but has the appeal of a heap of building blocks and a personality to match.

Given how uninteresting Knack and his companions are, the villains end up stealing the spotlight in this lengthy (and beautifully animated) story. The narrative’s introductory chapters are as predictable as can be, but things begin to unravel in interesting ways roughly halfway through the campaign. I like where the story goes, and it gets surprisingly dark in the final moments.

Knack II is the sequel no one expected to see, yet everyone should consider playing, especially if they are fond of Ratchet & Clank, Jak and Daxter, and Crash Bandicoot.

8.25
About Game Informer's review system
Concept
A sequel that finds success through variety and rapid changes in the gameplay script
Graphics
Knack is still a strange-looking character to behold, but the chaos he can unleash is impressively captured in explosions of polygons
Sound
I love how the orchestrated score changes tone to capture the scale of Knack and the flow of the narrative
Playability
Knack’s ability to change height is tapped frequently for combat and traversal needs, making for more interesting challenges – all of which are made better through co-op
Entertainment
Still the same Knack gameplay at its core, but now with greatly needed variety
Replay
Moderate 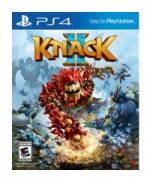