Kirby Divides And Conquers
by Dan Ryckert on Sep 19, 2011 at 09:09 AM
Publisher: Nintendo
Developer: Nintendo
Release: September 19, 2011
Rating: Everyone
Reviewed on: DS With Nintendo’s portable focus squarely set on 3DS recently, it’s easy to forget that a new Kirby adventure is on its way to the good old DS. In his latest entry on the system, Kirby Mass Attack puts gamers in control of up to 10 versions of the adorable pink puffball. Featuring stylus-only controls and some gameplay elements reminiscent of Pikmin, it beats Squeak Squad, Super Star Ultra, and Canvas Curse as the best franchise entry on DS.

Outside of a brief exposition explaining how the evil Necrodeus splits our hero into 10 pieces, the game wastes little time dropping you into the action. Each hub world starts you with only one Kirby, and you’re tasked with collecting fruit to add more to your count. Similar to the star doors in Mario 64, it takes a certain amount of Kirbys (up to 10) to enter each subsequent level.

Once inside a level, your crew is controlled by dragging a star to the group’s destination. A double-tap makes them run, a single tap allows for more precise positioning, and tapping an enemy causes the whole group to hop aboard and pummel them into oblivion. Some enemies won’t be vulnerable from the front, so you must flick Kirbys with the stylus for better positioning. Flinging your group onto the back of a baddie to take them down reminded me of Pikmin, and the flick mechanic offers a surprising amount of control.

Most stages simply require you to get to the exit with as many Kirbys as possible, but the game occasionally throws in one-off mechanics that do a great job of mixing up the experience. One places the group in a tank that shoots Kirbys out one-by-one, while others have you influencing the direction of a hot air balloon or a teetering tree by positioning your group accordingly.

Even if your attention is turned to the new generation of portable systems, it’s worth taking a step back to play Kirby Mass Attack. With solid touch-based control mechanics, a wealth of unlockables, and the classic Kirby charm, it’s another great first-party experience on a system full of them. 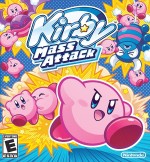 Purchase More Info
8.5
i
Game Informer's Review System
Concept A side-scrolling adventure that lets the player control up to 10 Kirbys with the DS stylus
Graphics Bright and cartoon-like, resembling old-school Kirby more than Wii’s Epic Yarn
Sound Classic Kirby tunes are always welcome, and the new ones fit right in
Playability Stylus-only controls worked great for the series in Canvas Curse, and they work just as well here
Entertainment The standard stages are great, and the wealth of unlockables will keep you coming back for more medals
Replay Moderately High