Kingsway presents a simple, effective loop of slaying monsters, completing quests, gaining experience, and finding new loot. You do all of this while avoiding permadeath on an island that’s different every time. What separates Kingsway from the rest of the role-playing pack is its adherence to an age-old Windows-based aesthetic, with the gimmick that you’re battling with your own window management and interactions fly across the screen demanding your immediate attention.

Gameplay is simple but satisfying: Pick a class and make your way across the island to the castle where the boss lies, leveling up and looting along the way. You select from classic RPG classes with special abilities, like rogues that can dodge and poison, or a beast that grows and can eat any trash you have laying around for hit points. Other classes are unlocked by fulfilling certain requirements, and they’re all sorts of fun to tinker with – but at the end of the day, Kingsway is about finding big weapons and armor and slamming the basic attack button.

Combat is the most interesting part of the experience, foisting enemies upon you that do things like close your open windows, have multiple buttons appear that need to be hit quickly, like falling icicles, arrows shooting across the screen, or even plants threatening to ensnare you.  Perhaps the jellyfish you slam with your club splits into two, or the cultist boss you’re battling summons up a throng of skeletons with their own windows, clogging up the screen and adding stress to a battle. This gimmick is initially quite clever and makes the journey a joy, but the conceit loses its flavor and falls off fast as you play through the same content multiple times, either because you died and have to punch through the same skeletons again or you complete the game and are on a quest to get a different ending. A playthrough done carefully to get stats, abilities, and gear in order to win won’t take more than a couple of hours, though you probably won’t be left very satisfied by the first ending. Essentially, following the rules leads to a rather lackluster conclusion, and if you’re curious you can start a new game and dig deeper to find more endings and secrets. The obvious path of taking down the purported final boss in the castle isn’t the only route to victory, and you may have to tinker with some items or discover some of the map’s mysteries to find others.

Running through the same dungeons, collecting the same golden power items, and finding out how to play new classes loses its luster for subsequent playthroughs. The amusing phantoms that close your windows when they hit you were cool the first time, but now you just wish they’d leave you alone and let you slog through a screen of goatmen and knights. For all its randomized properties, Kingsway feels incredibly predictable after just a few hours, and that damages its charm. The gimmick of Kingsway is rather glorious, but the grandeur fades quickly as you take up your sword and staff for the third or forth completion run. The novelty of Kingsway is quite potent, but it just doesn’t have any staying power. As something to hammer out in a day and put down never to play again, it’s a fun diversion – but don’t count on it to keep you exploring the ever-changing island for much longer than that. 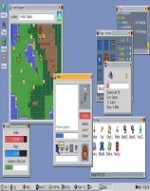 A blast from the past that's over too soon.

Purchase More Info
7.75
i
Game Informer's Review System
Concept Play through a roguelike RPG with windows from a forgotten era of computing
Graphics They’re really dated, but that’s intentional and it works out okay
Sound Ancient and archaic, but it fits the style and feel of the game
Playability Grasping the basic concepts is easy, and the learning curve is mild. You die a lot at first, but can reliably complete the game once you get the hang of it
Entertainment Your first completion is a lot of fun, and should only take a couple hours. After that, you can chase down the multitude of other endings and unlocks
Replay Moderate