King Graham has been through a lot. By the time the fifth episode starts, we’ve seen him avoid certain death from a dragon, claim a throne, and lose (then reunite with) a child – and those are just the highlights. These pivotal events have taken place in flashbacks, with Graham retelling the stories to his granddaughter, Gwendolyn. Along the way, we’ve witnessed the hero transform from a naïve youth to a middle-aged ruler. In the final chapter of his story, our hero has to reconcile his determination to go on one last adventure with his fading memory and aging body. It’s a bittersweet ending to the series that caps it off on a hopeful note.

We knew that King Graham’s tale was drawing to a close from the outset. He’s largely bedridden when we reunite with the character, and over the course of each chapter his health has waned further. However, his magic mirror has promised one final adventure, and Graham’s determined to see it through.

We’ve traveled throughout Daventry during the game, and the final chapter sticks close to Graham’s kingdom. The locations are familiar, but they’ve transformed over the years. I’ve grown fond of these places in the hours I’ve spent with the game, and the return trip was filled with little surprises. Graham has to navigate a tunnel that previously required a lantern; now it’s been overhauled with lights as part of a civic-improvement initiative. Old friends also return in various forms, and I was glad to see them again.

Graham’s always been one for embellishment, which has been one of the funniest parts of the games. Players who tried doing weird things were often rewarded with Christopher Lloyd’s stammering that, now that he thinks about it, that wasn’t how it happened. This time, his retelling is unreliable because of his memory loss. A few puzzles center on his inability to keep his facts straight, and even though these inconsistencies are played for laughs, it’s sad to see our once-proud hero in this state. Some areas are blanked out, as Graham can’t recall the details. And in one panic-stricken moment, he desperately tries to embellish moments from previous chapters so they’re more interesting. Gwendolyn does her best to calm Graham down and get him to tell the stories as they actually happen. The two characters have had great chemistry from the beginning, and their interactions are particularly sweet here. A storytelling handoff happens later that ties things together beautifully. The Odd Gentlemen have done a fine job with its storytelling, though the puzzles and the ways they’ve been incorporated in the tale have been inconsistent. I thought the previous chapter leaned too heavily on them, and while they’re still abundant in the conclusion, they fit well overall. Another fun escape-room style section requires careful observation and exploration. The final section is a puzzle-heavy showdown with the villain that is satisfying and interesting. The only real misstep is a retread of an earlier music-box puzzle that I had to brute force my way through, thanks to poor in-game lighting, my TV’s color calibration, or something else.

This marks the last full episode of the King’s Quest season, and I’m relieved that it ends on what actually feels like an ending. There have been some great treats for longtime fans throughout the previous chapters, but The Odd Gentlemen rewards that loyalty. Some players might find a couple of moments on the corny side, but without spoiling anything, I was absolutely delighted by it all.

I’m sad that this marks the end of this retelling of King Graham’s adventures, but I’m also excited about the seeds that have been planted. Graham and his successors will live on in our imaginations, and I think that’s the kind of legacy that he’d want.

A King's Quest Epilogue
Chapter 5 ends on a satisfying note, but Sierra has an epilogue in the works for those who bought the game’s Complete Edition. Sierra isn't sharing details on where the epilogue is set, how long of an experience it offers, or if it even includes playable content. In the meantime, The Good Knight feels like a conclusion.
Off
On
Off 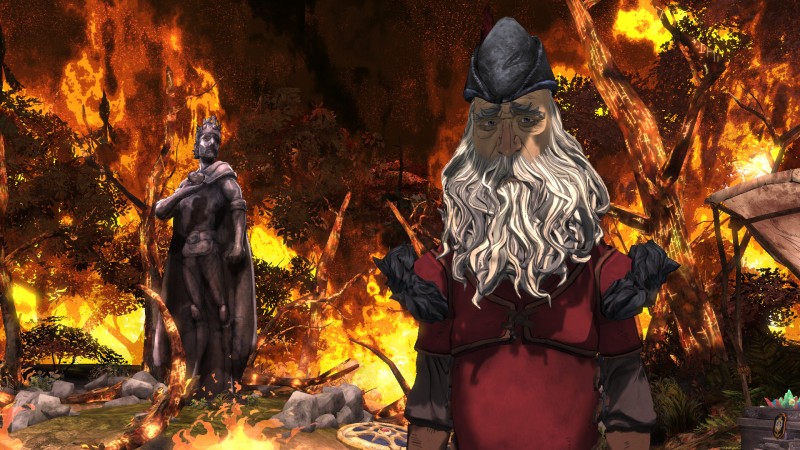 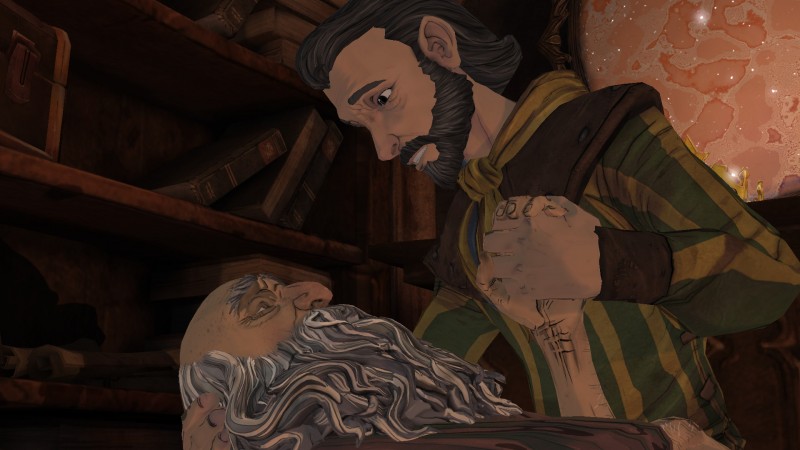 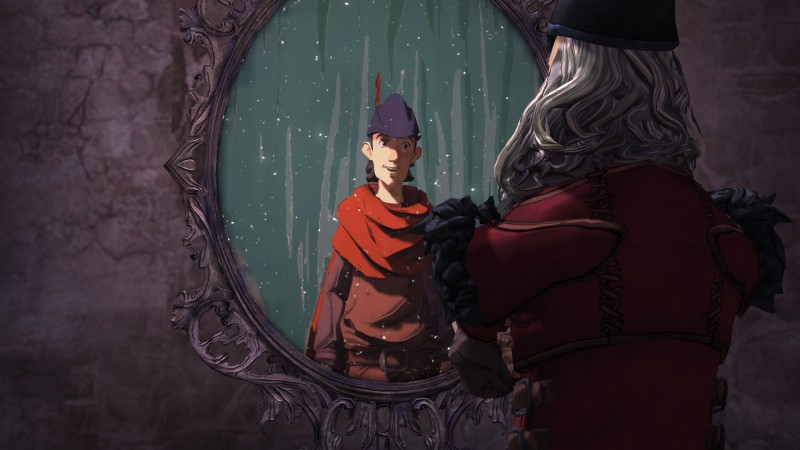 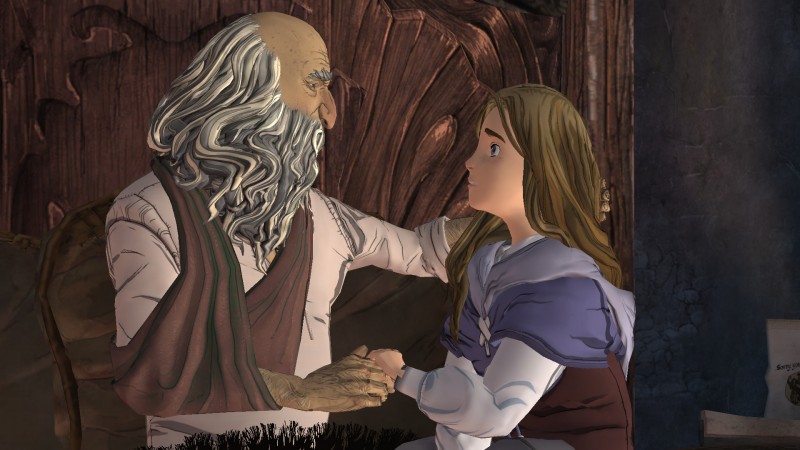 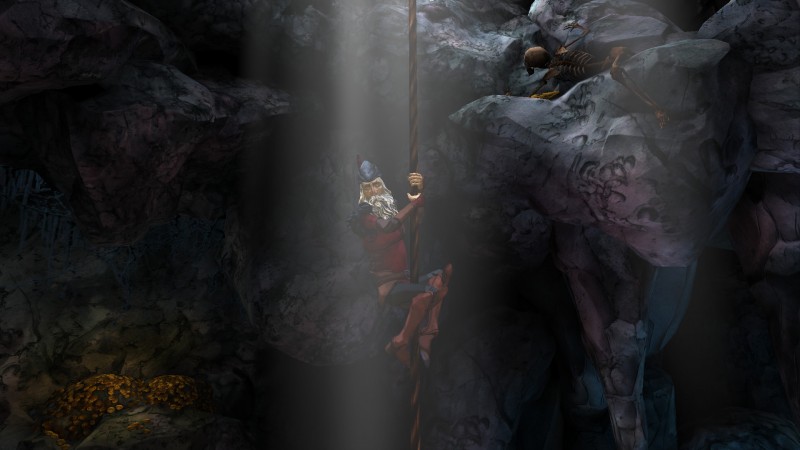 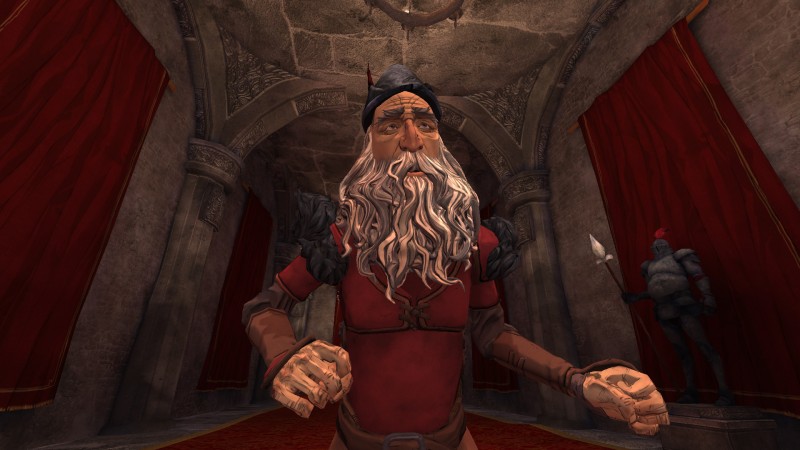 8
About Game Informer's review system
Concept
Wrap up the King’s Quest retelling with an emphasis on King’s Graham’s final adventures
Graphics
Familiar places have changed over time, breathing more life into well-trod locations
Sound
This chapter features some of the season’s most dramatic moments, and the actors deliver wonderfully
Playability
Puzzles are interesting and well designed, but one seems as though it was created with a vendetta against the color blind
Entertainment
This final chapter is bittersweet, wrapping up King Graham’s story while pointing toward something new
Replay
Moderately low