In recent years, a wellspring of modern adventure games have bubbled up attempting to recapture the magic of yesteryear's point-and-click titles. Modernizing a genre built upon abstract puzzle logic, trial and error, and frequent backtracking is a tall order, but The Odd Gentlemen have found a solid balance in the first chapter of its episodic return to the classic Sierra fantasy series. Save for a couple nuisances, this first chapter is a heartfelt and entertaining return for King Graham.

Part of King's Quest's charm lies in the narrative framework of an elderly King Graham recounting the stories of his youth to his granddaughter, Gwendolyn. Her effervescent attitude meshes well with the tired-yet-playful Graham (voiced by Back to the Future's Christopher Lloyd), giving off a fun, unmistakable The Princess Bride vibe. Speaking of The Princess Bride, much of the voice acting is spot-on, like the diminutive yet cunning knight-in-training Manny, voiced by the aforementioned film's Wallace Shawn ("inconceivable!"). Lloyd's performance as old Graham mostly works, though the 76-year-old actor occasionally sounds like he's either phoning it in or too tired. Regardless, I found Graham's storytelling with Gwendolyn sweet and refreshing.

Thankfully, the world opens up in a delightfully nostalgic way, embracing the design tenets of the genre's roots. A large portion of Daventry is open to explore, like the town square's shops, a dubiously advertised floating island, and spooky woods crawling with wolves. Players are left to ponder solutions for various conundrums. How could dipping all my objects into purple dye help me? Should I pilfer a big shield, wooden tabletop, or a huge circular loaf of bread to use as a wagon wheel? King's Quest nails that delightful adventure game sweet spot for me, where a sudden eureka moment triggers a domino effect of puzzle solutions. King's Quest does a great job of rewarding players for exploring every nook and cranny, no matter how deadly it seems. Like the Sierra games of old, Graham can venture into certain death. I watched the prospective knight get crushed by a dragon and turned into squirrel food. Thankfully, Gwendolyn calls out her obviously alive grandfather on the mistelling, allowing players to select a safer path. This clever mechanic, along with generous autosaving, prevents players from becoming too frustrated or falling into the infamous fail states of the old games.

Being free from severe punishment takes the edge off in a nice way, but King's Quest occasionally frustrates. The open design of Daventry is the biggest asset and most frequent hang up. Without any type of map, you can easily lose track of where the winding paths lead, even if you've traveled them several times. Adventure game purists might appreciate it, but even as someone who grew up playing many LucasArts and King's Quest I found it tedious. Another snag lies in the unskippable cutscenes and dialogue, which become even more annoying when you're trying to investigate an object and accidentally activate a scene you've seen too many times.

Visually, King's Quest is comparable to other modern episodic adventure games. The heavily stylized character design reminds me of Telltale's suite of games. However, The Odd Gentlemen's wonderful animation brings these characters to life. Little touches like young Graham's flowing scarf and flailing arms as he flees add a lot of personality to the cast. I noticed a couple woodland critters scampering along with jarringly minimal animations, but these flaws are infrequent. The expressive character movements and colorful art style goes a long way to cover up the fact that this game isn't a graphical powerhouse.

So far, King's Quest is remarkable in its ability to call back to the classic design of '90s point-and-click adventures without succumbing to as many pitfalls. The combination of wacky character interactions, goofy logic puzzles, and heartfelt story beats has me eager to see what's in store in Chapter II. The team at The Odd Gentlemen has created one of the most endearing, true-to-form adventure games I've played in recent years.

For more on King's Quest read our in-depth feature about The Odd Gentlemen taking on the challenge of making a new entry in the storied series. 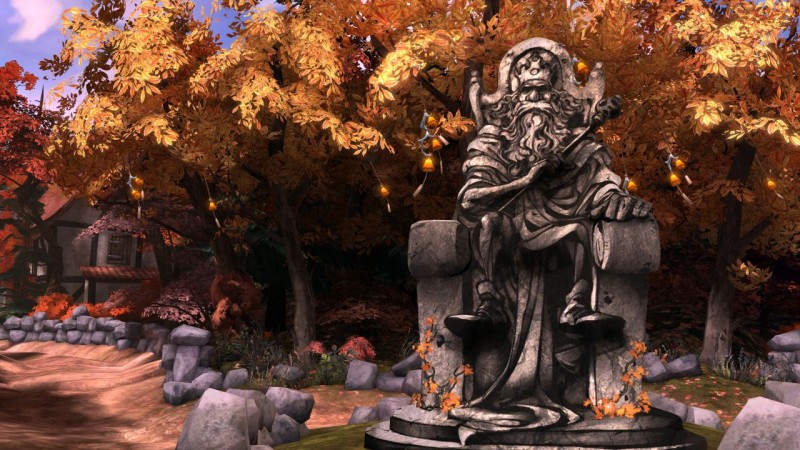 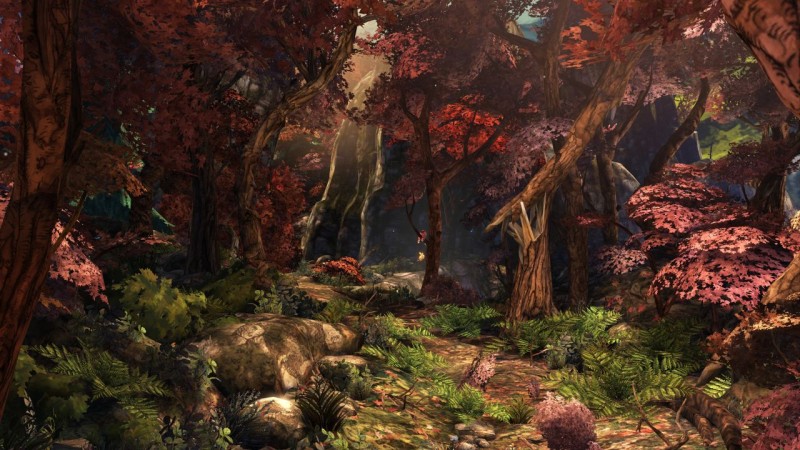 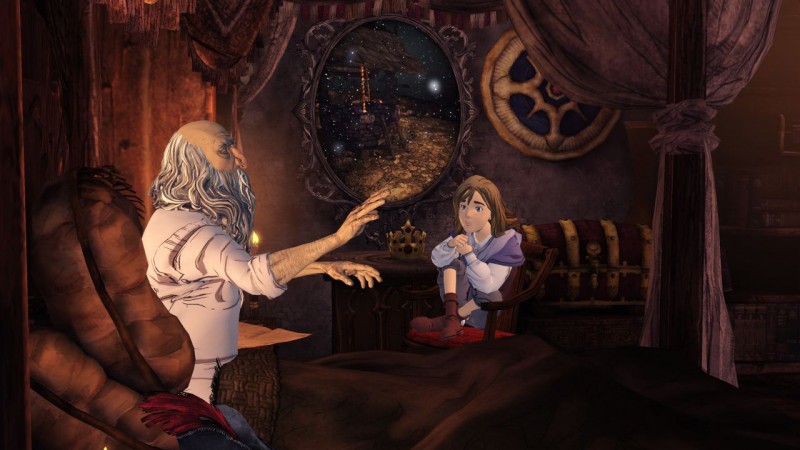 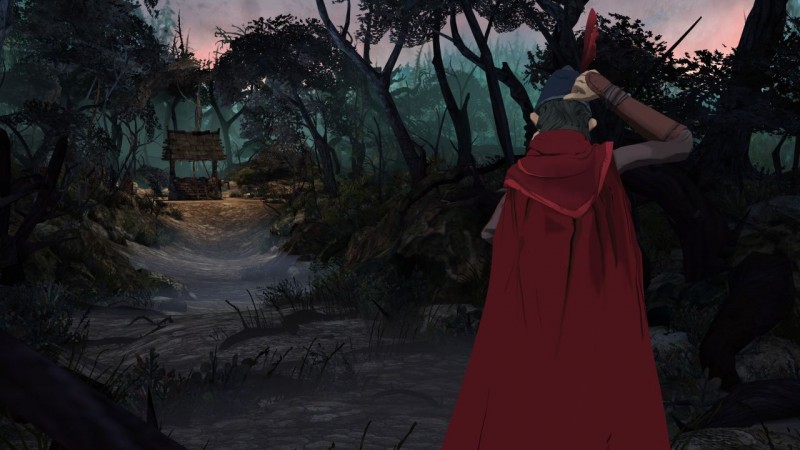 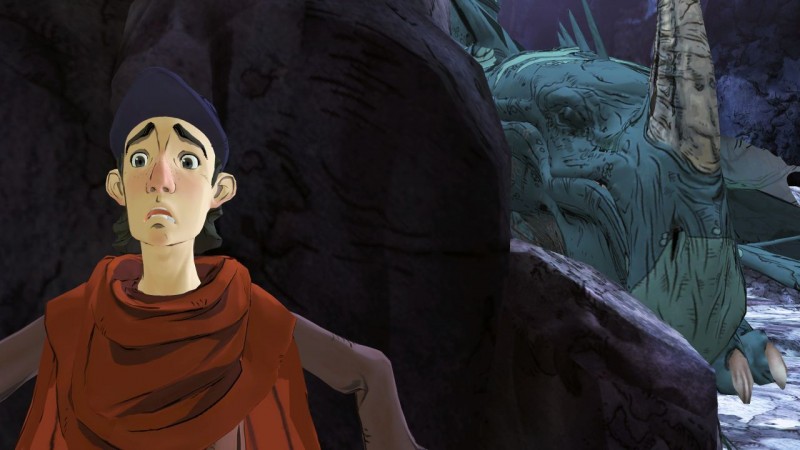 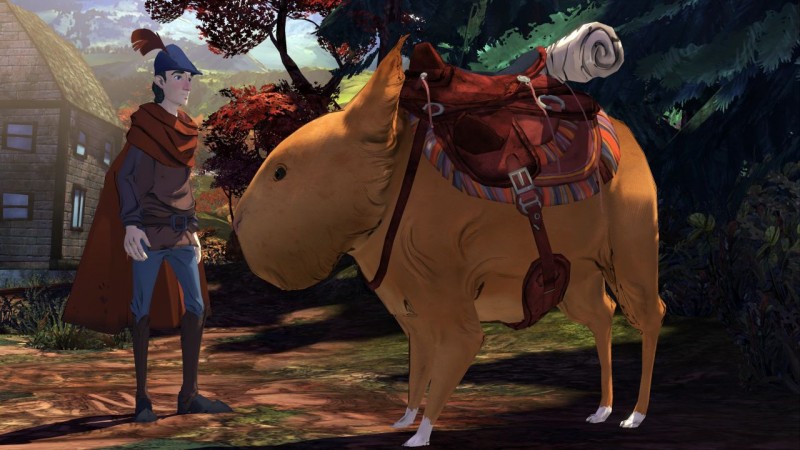 8
About Game Informer's review system
Concept
Return to old-school adventure game form with a feather-capped legend in the genre, while shaving off the most annoying bits
Graphics
The rough, basic character models and environments are saved by a charming art direction and incredible animations
Sound
Most of the voice actors perform wonderfully, with a few odd exceptions. The music and puzzle sound design is on point
Playability
Controlling Graham directly feels great. Frequently getting lost while backtracking and the occasional repetitive puzzle design are issues, though
Entertainment
One of the best examples of an aging formula done right by modern standards. The engaging characters, challenging puzzles, and entertaining story arcs make it easy to recommend
Replay
Moderately High