Back in 2004, the original Game Boy Advance Chain of Memories served a vital purpose. A nice snack for starving fans left hanging after the ending of the original Kingdom Hearts two years earlier, the game set up mysteries leading into Kingdom Hearts II and introduced Organization XIII, Namine, and DiZ. Sure, it trudged back through many of the same worlds as KH 1, but at least we saw everything re-imagined in sprite form. However, like watching foreign films, some people just don't play portable games. So now we have what is essentially a ''Hollywood remake'' of CoM on PS2.

The added voicework and 3D presentation is cool in some respects, but fans already know what happens on both ends of this story even if they haven't played the GBA version. The text-heavy dialogue and fading memory plotline will have you mashing X to burn through it, especially during scenes like this: ''Who are you?'' ''Don't you remember me?'' ''I think I do, maybe.'' ''Well, you seem like a nice person.'' Almost all of the in-game assets are recycled from previous games and the world-by-world stories are dusty retreads of KH 1 setups (which are already retreads of Disney movies).

The card battle system, love it or hate it, returns with some additional contextual button pressing. If you've never tried it, be prepared for plenty of deck organizing and more strategic combat. While the former 2D battle plane kept almost all of the enemies in view, with the new 3D system they can sneak up from off screen due to occasionally wild targeting system. The annoying door card system still forces you to pick a fight with every enemy or risk getting screwed out of forward progress.

In the end, Re:Chain of Memories is a serviceable, inexpensive RPG that will satisfy fans curious about this ''lost'' chapter in the KH series and the few people who really enjoyed the ­original CoM.

6.75
About Game Informer's review system
Concept
Revive a four-year-old game on an eight-year-old console
Graphics
Identical to Kingdom Hearts 1 and 2
Sound
Haley Joel Osment's return to work is great. Most of the soundtrack is recycled from previous games
Playability
The card battle system remains relatively unchanged, so beware if you're expecting traditional Kingdom Hearts combat
Entertainment
Easily the weakest link in the franchise
Replay
Moderate 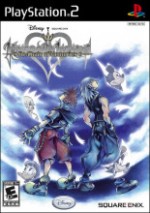 Kingdom Hearts Re: Chain of Memories