Anyone depressed that Square Enix is dragging its feet on a high production value PS3 release of Kingdom Hearts 3 would be insane to pass up Birth by Sleep simply because it’s on PSP or that it doesn’t place series hero Sora in a lead role. This entry stands alongside Kingdom Hearts II visually with impressively detailed characters, animation, and on-screen effects. Instead of retreading the same old worlds, it brings in brand-new locations like Snow White’s forest and Stitch’s spaceship prison (if I never have to run through Agrabah ever again, it will be too soon). And it finally explains what the heck is going on in that crazy secret movie with the bunny armor people in a keyblade graveyard from the end of Kingdom Hearts II.

New characters Terra, Ventus, and Aqua play precursor roles to Riku, Sora, and Kairi respectively. They all hope to become keyblade masters and have trained hard for the privilege. You can’t help but draw comparisons to Star Wars in Birth by Sleep, especially when one of the three must battle against the dark side, I mean, the darkness. Despite the heavy borrowing, replacing Jedi with keyblade masters and the Force with magic fits well.

Combat blends melee combos with easily accessible magic and keyblade specials. Like any RPG, your character levels up as you gain more experience, but Birth by Sleep lets you gain experience in each ability. I became addicted to swapping abilities once they maxed out and combining them to make more powerful new ones. When combining abilities, you can also keep any perks tied to a maxed ability like fire resistance, bonus health, or longer combos. This move evolution system doesn’t always tell you what you’re going to create, however, so I wasted a lot of materials along the way in order to tailor my characters how I wanted. Scoring a powerful acrobatic move or a rare powerful spell makes it all worth it in the end. Once you know what you’re doing you can get stronger quickly. Players choose one of three protagonists at the start and follow each story from one Disney world to the next until the final confrontation. In 10 to 12 hours, you’ve beaten the game and must start over with the next character. You’ll travel to all the same worlds in essentially the same order, but you’ll explore different areas of the map, meet different characters, and battle different bosses. In Cinderella’s world, for example, Ventus is shrunk down to mouse size to help collect items for her dress, Terra escorts her to the ball, and Aqua makes sure she gets to try on the glass slipper. While it’s an interesting concept, by the time I got around to playing Aqua on my third playthrough, I had already been everywhere twice and had powered up two characters. It’s no fun starting over at square one again after you’ve tasted ultimate power. It doesn’t help that Aqua’s story is the weakest of the three, either.

To play the final wrap-up chapter after all three careers, you have to collect all of Xehanort’s reports. If not, you have to go back and grab them and re-beat the game with those specific characters. It’s kind of a pain that you can’t just go right to the end, but if you’ve explored along the way you’ll probably have most of them anyway.

Multiplayer is local ad-hoc only, so good luck finding a friend with a PSP and copy of the game. If you do, you can team up or face off in a variety of minigames like a kart racer, a Monopoly-esque board game, and several arena matches. I didn’t care for the first two options, but it’s always enjoyable to be able beat up a friend in battle or team up with them to take on waves of enemies.

Overall, I loved the combat, leveling, and look of Birth by Sleep, and I applaud the bold storytelling approach of having three storylines. I’m just glad I won’t have to start up another character from scratch in this game ever again.

Getting more out of Birth by Sleep
If you’re interested in playing Birth by Sleep, you should consider investing in a hefty memory stick. To reduce load times as much as possible, you have to install 624 MB of data onto your system. Also be sure to boost color depth up to 32-bit and push the CPU speed up to 333hz. The game will look great and run as smooth as silk no matter how many effects are flying around on screen.
8.5
About Game Informer's review system
Concept
Tell the origins of the Kingdom Hearts world, borrowing from Star Wars
Graphics
The graphical limitations of other portable Kingdom Hearts titles are not a problem here. Birth by Sleep is gorgeous
Sound
Leonard Nimoy shines as lead villain Xehanort, while Mark Hamill surprises as mentor Eraqus
Playability
Quite possibly the series’ smoothest and most dynamic combat system yet
Entertainment
Any story becomes tired when you have to repeat it so much
Replay
Moderate 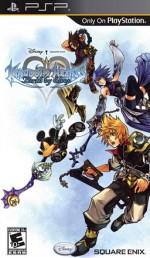