While some players won’t tune into the Kingdom Hearts series again until the title includes a “III,” others keep up with the new installments no matter what. Dream Drop Distance is one of those titles that reaffirms your faith in Kingdom Hearts (like Birth by Sleep) rather feeling like an obligation (like Re:coded). If you’ve passed up other non-numbered entries, this game provides an extensive journal brimming with plot summaries and character info. It’s not easy to boil-down a 10-year-old series as convoluted as Kingdom Hearts can sometimes be, but Dream Drop Distance does a great job.

The story picks up after Re:coded with Sora and Riku tasked by Yen Sid (the sorcerer from Fantasia) to take the Mark of Mastery exam, become keyblade masters, and grow powerful enough to face the coming of villain Master Xehanort. To pass, they must awaken seven sleeping worlds based on Disney properties, as per usual.

Some levels are new to the series, like The Hunchback of Notre Dame, while stages based on Tron: Legacy and Pinocchio feel new since you’re dabbling in different areas that weren’t in the previous games. The stages are entertaining and introduce creative exploration mechanics via “reality shifts,” like drawing a line on the touch screen to zip up to higher platforms, or doing a music minigame to open new areas. I was skeptical of the Three Musketeers level due to its basis on a 2004 straight-to-DVD movie, but its swashbuckling nature ultimately fits well into the flow of the game. Nonetheless, I’m concerned that Square Enix is willing to turn to the bottom of the barrel like this. What’s next? Stages from An Extremely Goofy Movie? Maybe Cinderalla III: A Twist in Time?

Combat this time around is based entirely around dream eaters. These colorful creatures, based on animals like elephants, cats, and dinosaurs, serve as your primary enemies (nightmares) and allies (spirits). Rather than catching them all like Pokémon, you craft them using recipes. They level up by fighting at your side or via a variety of minigames. In turn, they each have a custom ability board that serves as Sora and Riku’s primary upgrade mechanic. Power ups like health and damage boosts are only active when that creature is in your party, while spells and support abilities like longer attack combos stay with you forever. Petting and feeding spirits to get the most out of them is cumbersome, and I felt obligated to constantly check my boards and deal with pesky loading. Some kind of alert that you could put on abilities you’re gunning for would have alleviated much of this frustration, since I enjoyed the ability board system overall.

On the battlefield, spirits are on par with past AI companions, which means they are slightly useful. Normally, they chip off a little damage here and there and cause a distraction for groups of enemies. Sora teams up with them for a dual attack that provides a nice, invincible reprieve from tense battles, while Riku incorporates them into powered up blade attacks. The latter can do massive damage, but Riku’s fancy attack animations make it tricky to trigger cure spells if you run into an emergency.

The mix of physical attack specials and magic is effective once you get the right combo. You’re always unlocking something new, and I loved experimenting and finding surprisingly powerful abilities. The new flowmotion attacks allow you to perform environmental specials at almost any time with no cooldown time. These moves are integrated smoothly into the traditional battle system; you’ll spring off a wall and drill into an enemy, spin around a pole and smash foes in a wide area, or grab stunned nightmares and toss them across the map.

Since you’re playing as both Sora and Riku, Square Enix decided to have more of a back and forth of control this time rather than entirely separate campaigns like in Birth by Sleep. I’m torn on this new “drop” mechanic that forces you to change characters when a timer runs out. It allows you to keep up with both characters’ stories regularly, and it creates cliffhangers similar to TV episodes, but switching characters can be disorienting and annoying. The negative side of the drop system is softened by several options to extend your timer, but there are a few gates throughout the game that force you to drop to proceed.

I found the standard difficulty mode to be a nice pleasant stroll without the need for too much grinding. This all screeches to a halt at one of the final bosses. Not only is the fight disproportionately hard, it also includes a timed touchscreen minigame that shoots you back to an earlier stage of the fight if you fail. After getting destroyed over and over, I went off to grind levels for a few hours and optimized my spirit loadout. Upon my return, I handled this boss easily, but remained resentful of this difficulty-spiked roadblock.

Fans who are tired of Kingdom Hearts side-stories should be glad to know that this is definitely the last game before Kingdom Hearts III. I’m not going to tell you why, but the fact is made very clear. If you want to know the setup for the next big entry, you have to play this game to find out what’s in store for the conclusion of the Xehanort arc. You could just watch some cutscenes online, but you’d be cheating yourself out of a lot of fun.

[Curious about how Dream Drop Distance works with the Circle Pad Pro add-on? Read this.] 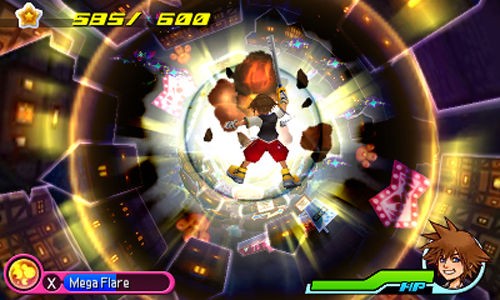 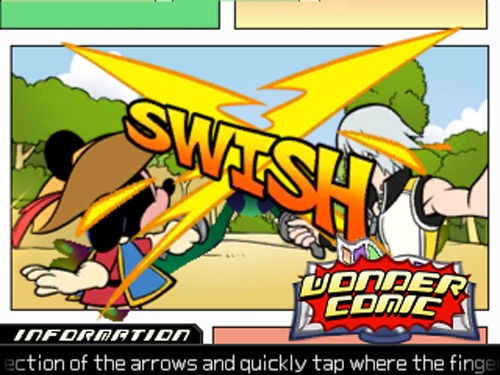 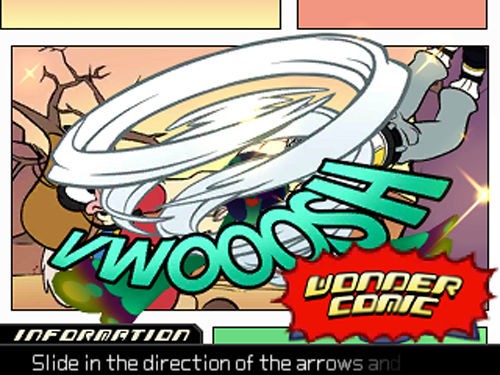 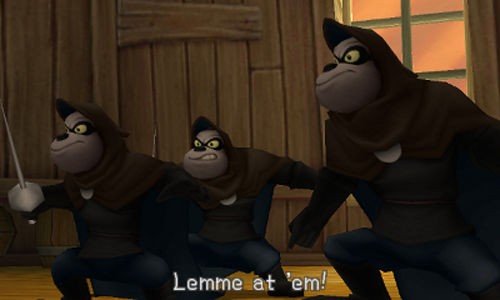 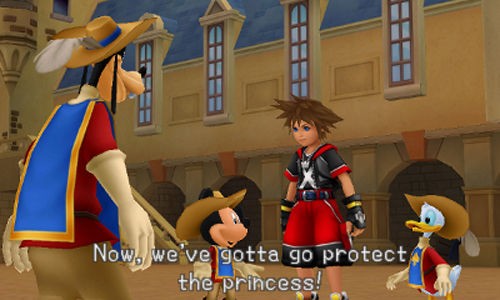 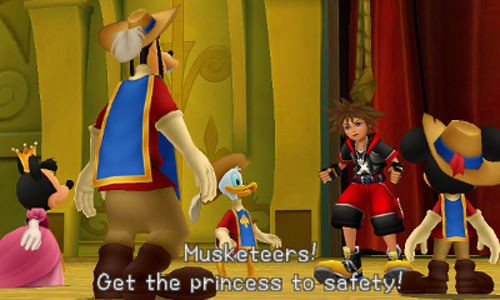 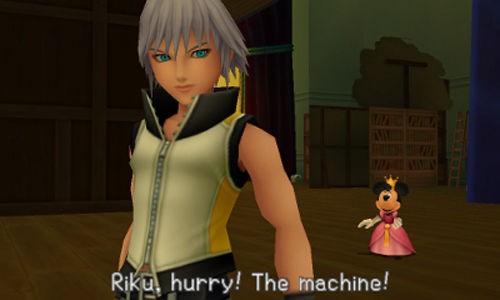 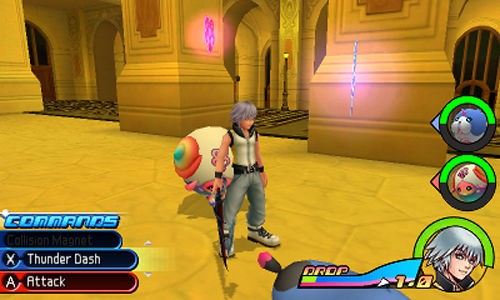 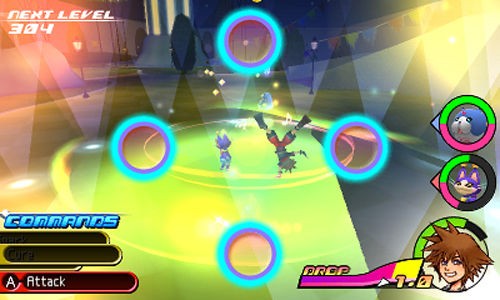 8.25
About Game Informer's review system
Concept
Bring monster collecting and 3D to the Kingdom Hearts franchise
Graphics
Visuals are crisp, colorful, and creative. The framerate holds steady in all but very rare cases
Sound
The excellent voice cast impresses once again (except the atrocious Beat dialogue). Classical music on the Fantasia-inspired level steals the show
Playability
Combat works smoothly, but constantly having to dig into menus gets to be a drag
Entertainment
This sets the table for Kingdom Hearts III, so jump aboard if you’re looking for a quality refresher course
Replay
Moderately High