Kinect Disneyland Adventures wasn’t designed for the people who will undoubtedly snicker at the sight of player avatars getting long hugs from Donald Duck. Instead, Kinect Disneyland Adventures is geared toward the folks who are likely to visit the park in real life. It might not offer the same sights and sounds as an actual trip to Anaheim, but families that are looking for a way to escape the winter blues with a vacation (even a virtual one) should check it out.

Disneyland Adventures is a series of minigames based on familiar park attractions, all wrapped up in a faithfully realized recreation of the Magic Kingdom. One or two players can explore the park, help Mickey and his friends with tasks, and play through the slew of minigames. Take that reductive approach, however, and you risk missing how well the entire package has been put together.

Navigating the park is a bit strange at first, but it quickly becomes second nature. To move, you hold a hand out in front of your body, moving it to either side to turn. You’re free to roam around and soak in the atmosphere, or you can be more productive and perform special tasks for various characters throughout Disneyland, such as collecting autographs or finding missing items. A sparkly trail shows where you need to go next if you get lost, and I appreciated the ability to pull up a map of the park and warp to the areas I needed to visit next instead of hoofing it. Teleporting also saved me from getting caught in corners, which is one unfortunate problem I ran into while moving my avatar around.

Frontier did a great job of transforming well-known Disneyland attractions into interactive games. Instead of simply occupying a seat on the Jungle Cruise, you play a multipart adventure where you spray water into hippos’ mouths, paddle a canoe down a raging river, and retrieve an artifact from a massive gorilla by throwing bananas. The Matterhorn adventure features a bobsled run, a snowball fight with yetis, and a ski race. If you’re looking for something less frantic, you can dance with a variety of princesses. There’s a decent amount of variety in the minigames, and some feature cel-shading and other visual tweaks that make each area feel unique. More importantly, I didn’t run into many issues with Kinect’s motion tracking aside from the frustrating throwing mechanic.

This clearly isn’t a game for the hardcore cynics out there. It is, however, another solid option for families looking for a new game to add to their library or for Disney junkies looking for another fix. Best of all, you don’t need to worry finding your car when you’re done. Fist bump!

7.5
About Game Informer's review system
Concept
Give families a chance to visit the Magic Kingdom without all the lines and hassles
Graphics
The game shifts between a variety of visual filters depending on the attraction
Sound
Mickey, Donald, and the crew are chatty, and the park is abuzz with ambient sounds
Playability
Some of the games work better than others, but motion tracking is pretty good overall
Entertainment
Sure, it’s a gussied-up minigame collection, but the package is done so well that it’s easy to recommend
Replay
Moderate 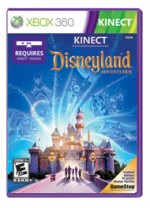