Killzone 2 is the best-looking shooter on the PS3, which puts it in the running for best looking shooter ever. Even better, the game doesn't fall back on its visual splendor, but offers tense, polished gunplay that sets it beside the other great console combat games. The campaign is a machismo-laden chest thumper, with a story that exists largely to move the character from one impressive locale to the next. A frequently intense but occasionally frustrating multiplayer component fleshes out the experience. With the exception of its stunning graphics, Killzone 2 doesn't do a whole lot that you haven't seen before in other titles. But what it does do, it does with aplomb.

The first Killzone involved an invasion by the vicious, red-eyed Helghast onto the planet of Vecta. This sequel turns the tables, with the ISA military soaring across space to depose the dangerous dictator who started the war in the first place. As Sev, an elite soldier in the invasion, you're thrown into one desperate scenario after another, from breaching a city's defenses to a running firefight along a speeding cargo train. While the game tries hard to give some credence to the characters, most of them exist to do one of two things: shout inflammatory curses at the bad guys or get blown up in a dramatic explosion. The campaign never ceases overloading your senses with constant action, and the chaos outdoes most games on the market. Simultaneously, there's a disregard for any sense of pacing in the gameplay. It's hard for that exploding building to have much ''wow'' effect when another building just exploded 10 seconds ago. Still, it's hard to level too much criticism at an action game for having too much action.

Combat feels tight and the AI is suitably cunning, but too many of the commonly available firearms feel like a machine gun variant. I found myself wishing that the more unique weapons, like the electricity gun or the brutal flamethrower, showed up more frequently. The enemy Helghast are fast, vicious, and clever, and have the unfortunate characteristic of all looking almost identical to each other. Only a few occasional enemies are fundamentally different, which is frustrating in a sci-fi setting where more imaginative enemies would hardly stretch the fiction.

The strong multiplayer game plays out across sprawling levels – it's clear that Guerilla envisions large-scale conflicts as their bread and butter. Objectives are constantly shifting, from demolition tasks to assassination targets to straightforward deathmatch scenarios. Static spawn points are a real drag during some objectives, when a single death sends you back for another two-minute run to get back into the fight. Even so, the PvP combat is solid and engaging, and a robust class and leveling system equals any of its competitors.

Killzone 2 is a fantastic addition to the PS3 catalogue. It makes good on the promise of its original unveiling nearly four years ago through unceasing action and breathtaking visual fidelity. It doesn't change our level of expectation for all first-person shooters, but it does give us all a good reason to keep playing them.

8.75
About Game Informer's review system
Concept
Continue the war against the Helghast in the best-looking shooter on the PS3
Graphics
Phenomenal visuals shine a spotlight on this system's capabilities
Sound
Sound effect work is a standout success, while the constantly shouted voice acting leaves a little to be desired
Playability
Numerous control schemes and the clean only-shows-up-when-needed HUD are both welcome
Entertainment
Intense, frantic, and technically polished, this is a great addition to Sony's lineup of exclusives
Replay
Moderately High 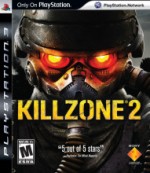